The first boardwalk ever opened in the United States, Atlantic City Boardwalk was originally developed in 1870 by a railroad conductor and a beach-side hotel owner to mitigate the amount of sand tourists were tracking into their businesses from the beach. Over the many years since, the boardwalk has grown into a popular strip for commerce, entertainment, and leisure.

Atlantic City Boardwalk, near the Casino (circa 1900) 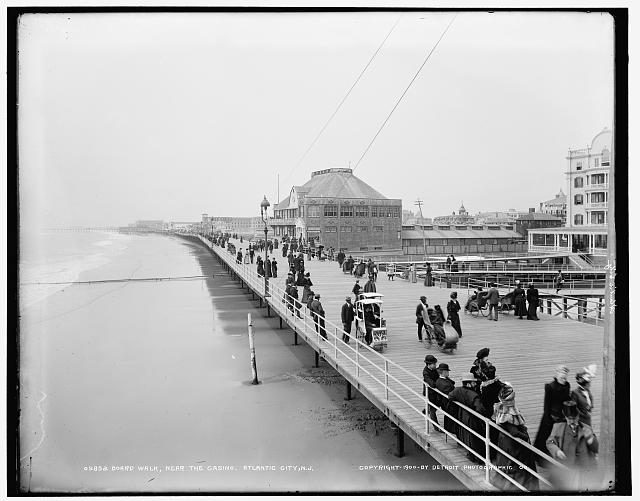 Rolling chairs on the Boardwalk (circa 1900) 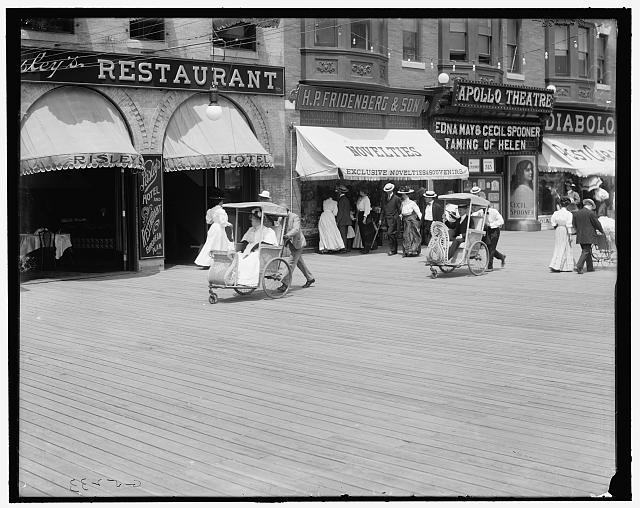 One of the Boardwalk's beloved rolling chairs 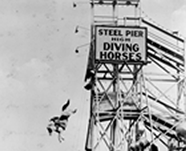 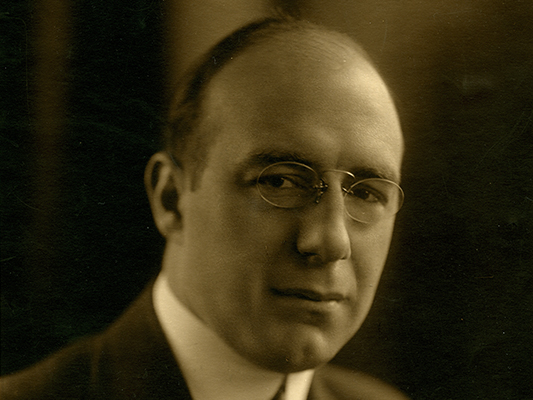 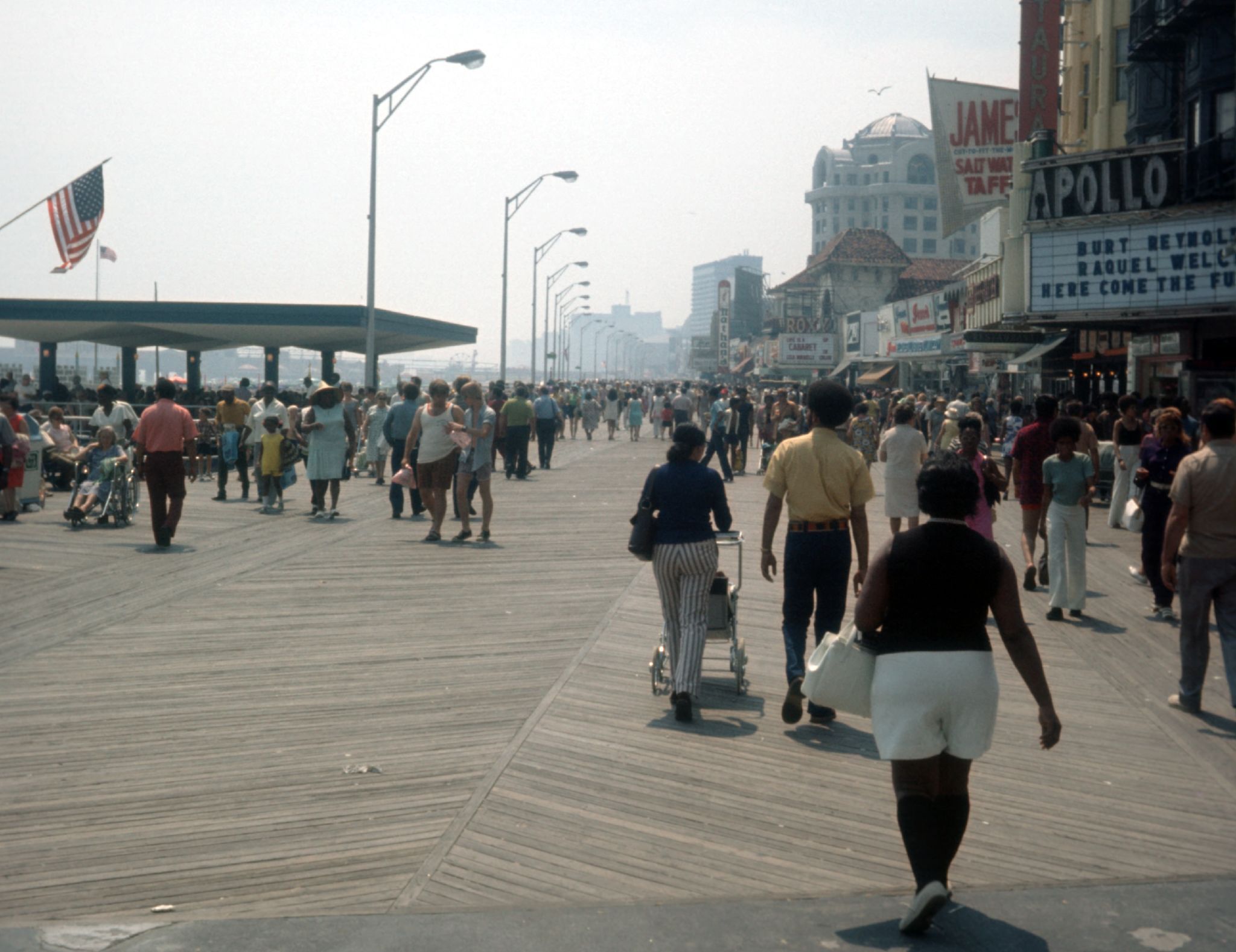 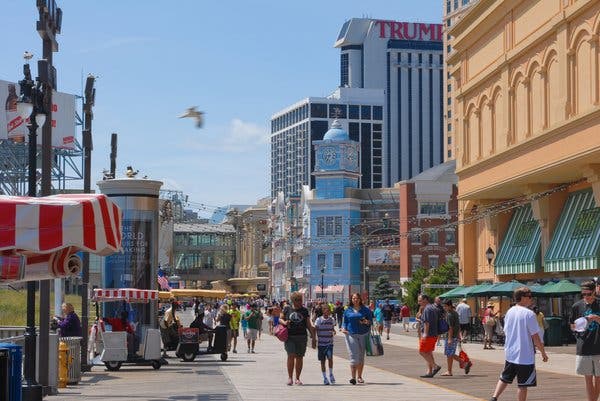 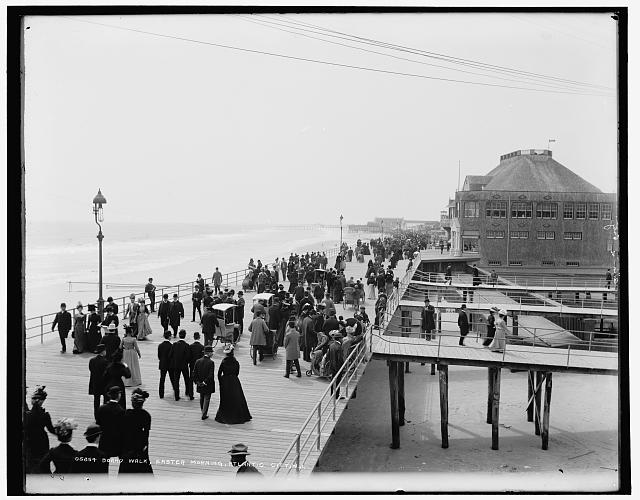 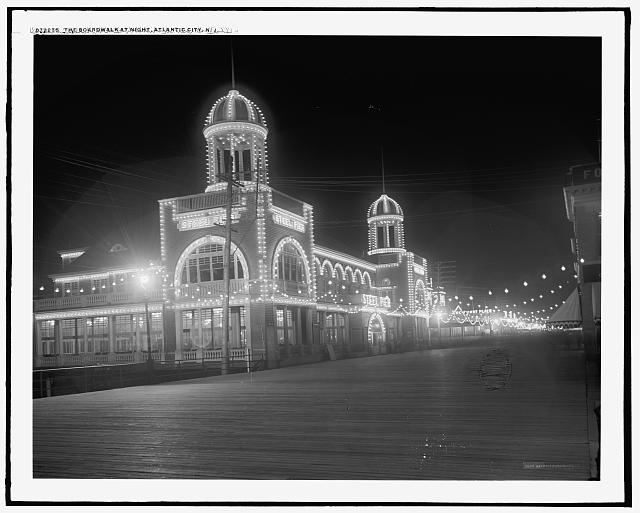 The idea for the Atlantic City Boardwalk was first developed by Alexander Boardman, a conductor for Camden & Atlantic Railroad, and Jacob Keim, owner of Chester County House- one of the area’s beachfront hotels. Both Boardman and Keim had grown tired of tourists tracking sand onto the carpets of their rail cars and hotel lobbies, so together they petitioned the city in April of 1870 to fund the project. The original version of their boardwalk cost $5,000 (half of Atlantic City’s tax revenues that year), was designed to be folded up and stored in winter, and was only 8 feet wide and one mile long. Construction was completed on June 16th, 1870 and ten days later, America’s first boardwalk was dedicated and opened to the public with much fanfare. At first, no commerce within 30 feet of the original boardwalk was permitted and vehicles of any kind were banned.

After ten years of wear, a newer and bigger boardwalk was commissioned in 1880. For this boardwalk, businesses were given permission to move within 10 feet. By 1883, the original ordinance restricting commerce was totally disregarded and more than a hundred businesses and other buildings popped up along its strip. A storm in 1884 destroyed the boards and led to the third version- this time twenty feet wide, two miles long, and elevated enough that the tide could wash ashore beneath it.

This same year, the boardwalk saw the first of its famous rolling chairs. First introduced as a kind of wheelchair, the covered chairs with wheels were the only vehicles allowed on the now much wider boardwalk and were meant exclusively for handicapped individuals. However, people enjoyed riding in them so much that some feigned handicaps to get to ride the chairs. The city didn’t object to this and the custom of riding in the rolling chairs grew. Eventually, the city would license these chairs in 1891 and charge $10 per ride.

In 1889, a hurricane destroyed the boardwalk and most of the buildings. Reconstruction gave Atlantic City Council the opportunity to pass legislation controlling commerce along the boardwalk. Completed the following spring, the fourth version was about 4 miles long and had railings on both sides. Piers were also created, hosting amusement park rides, concerts, and picnic areas. The fifth and final boardwalk was constructed in 1896 and, excluding some minor adjustments, is essentially the same one that is in use today.

Though the early 1900’s, Atlantic City Boardwalk saw an unparalleled boom. Part of this growth was thanks to its premier entertainment scene. Attractions varied from the renowned Diving Horse act to performances by stars such as Frank Sinatra, The Three Stooges, Bob Hope, and many others. The Miss America beauty pageant also found it’s start on the boardwalk (although in the original 1902 version, judging was based on the decorated rolling chairs that the contestants rode in, rather than the contestants themselves). Another key part of Atlantic City Boardwalk’s success during these years was its fostering of illegal business- chiefly gambling, alcohol, and prostitution. During Prohibition, local politicians and mafiosos, led by mob boss Enoch “Nucky” Johnson, ensured that Atlantic City remain a “wet city” (a city in open defiance of any federal or state restrictions on the sale of liquor). In 1923, local officials even jailed federal prohibition agents for three days and refused to let them correspond with Washington. This event later prompted a representative of the Justice Department to famously denounce Atlantic City as “the most corrupt city in the country”.

In the few decades following World War II, the boardwalk and the city as a whole saw a sharp economic downturn due to cheaper airfare and federal crackdowns on organized crime. Then in 1970, political boss Frank Farley began a campaign to legalize gambling in the state. After years of fighting and favors to get it in on the ballot, a referendum approving casino gambling within the confines of Atlantic City passed by a slim margin in 1976. Two years later, Resorts International- Atlantic City’s first casino- officially opened on the boardwalk. It was soon followed by the construction of several others. Three, including Resorts, are still in operation on the Atlantic City Boardwalk. Today, Atlantic City’s economy, while still struggling with corruption and decreased tourism, is largely reliant on the casino industry.