Known by several names, Penmar Park was a Philadelphia institution for nearly thirty years. Sources vary on the stadium’s actual date of construction, but it was most likely constructed between 1902 and 1903. Built by the Pennsylvania Railroad, the stadium was intended for use by the railroad’s Young Men’s Christian Association (YMCA). Apart from its planned use, the field hosted countless Negro Leagues games throughout the 1930s and 1940s. The park’s primary tenant was the Philadelphia Stars franchise, which was a member of first the Negro National League and later the Negro American League. The former park is noteworthy on several fronts. First among them are its connections with the now-legendary Negro Leagues. Vestiges of a bygone era, the Negro Leagues were the Black answer to white hegemony in the National Pastime. They rostered star athletes in their own right, and their ability to enthrall the public was renowned; they appealed to both white and Black fans alike. The other reason for this park’s notoriety is its connection with an industry which has seemingly little to do with baseball: the railroad industry. Indeed, the field was constructed and maintained by the Pennsylvania Railroad (PRR), and the company thus had a significant hand in the field’s upkeep. 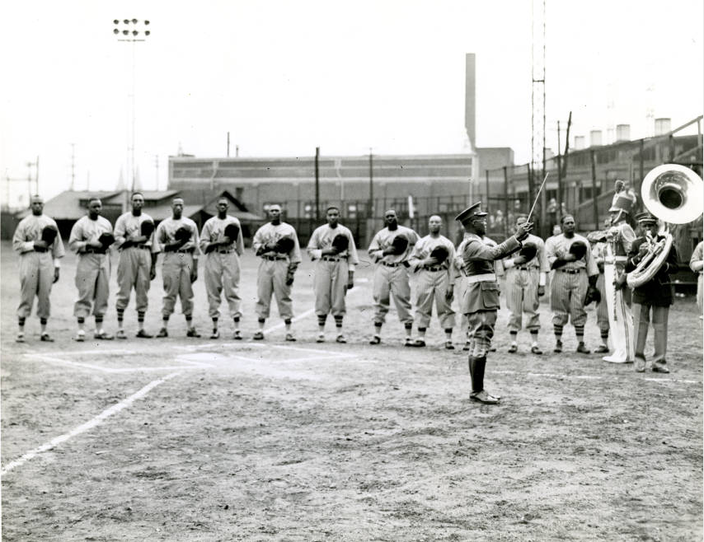 A view of a Philadelphia Stars game from home plate. Photograph taken sometime during the 1940s 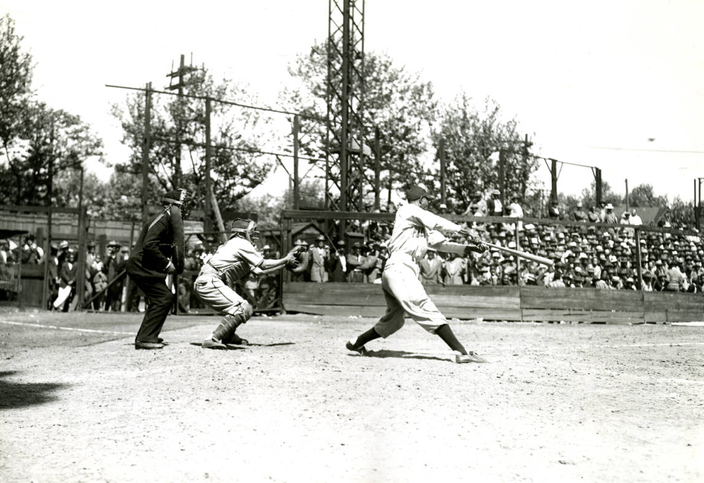 1944 team photo of the Philadelphia Stars. Behind the team is the famous grandstand from which Miss Hattie Williams obtained her firewood 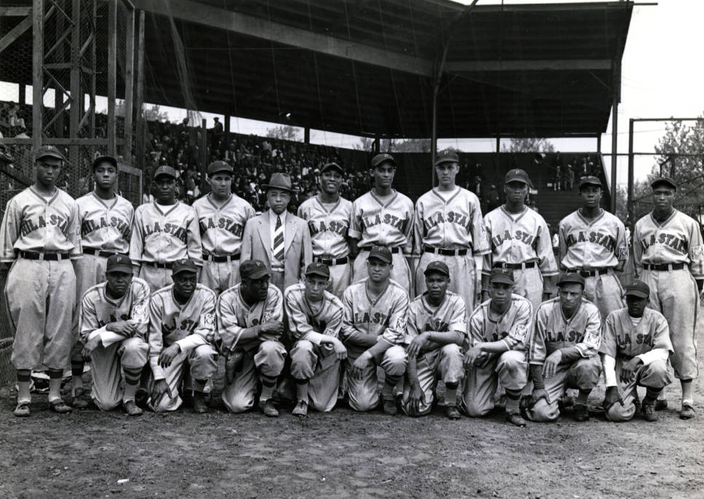 A 1940s aerial view of Penmar Park. Note the PRR 37th Street yards and their close proximity to the field 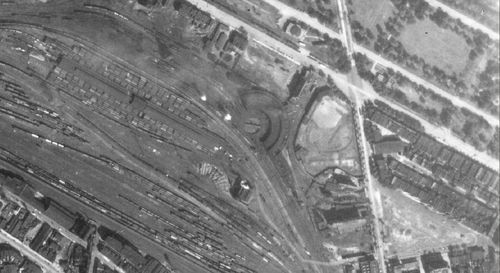 Penmar Park was erected by the Pennsylvania Railroad as a site for the railroad’s YMCA football team to practice and play. As mentioned above, sources indicate varying dates of construction. The best estimates place the construction date between 1902 and 1903, as there are few records of games played here prior to the 1920s. The stadium itself was constructed on land in the Parkside (beside West Fairmount Park) neighborhood of Northwest Philadelphia which already belonged to the PRR, and as such the railroad did not need to purchase real estate to accommodate its team. Because the field was laid out on railroad land, it was naturally located very close to railroad tracks. This would prove convenient for the railroad but a bit of a nuisance to players and spectators.

The field was located on what is today a vacant lot near the intersection of Parkside Avenue and North 48th Street. Penmar Park was bounded on its north side by Parkside Avenue and on its south side by the Pennsylvania Railroad Main Line to Chicago as well as a sizeable railyard. While the main tracks still exist today as Amtrak’s Keystone Corridor, the former 37th Street Yard has since been removed. The size of the vacant land beside the Amtrak tracks may seem to suggest that the field was quite sizeable; however most of this empty space was occupied by 37th Street Yard and the nearby ZOO Interlocking (also called ZOO Junction; named for the nearby Philadelphia Zoo). As a major division point between PRR’s Main Line from Philadelphia to Chicago and its Main Line from Washington, D.C. to New York City, ZOO Interlocking and its accompanying switch tower were a flurry of activity during the former half of the twentieth century, and this still remains the case today.1 If the park were still open today, spectators and players could play in a much cleaner environment, as the coal-fired steam locomotives that the PRR operated have long since been scrapped and replaced by Amtrak diesel and electric locomotives. During the heyday of Penmar Park, however, the sheer number of passing trains and the close proximity of the park to the Pennsylvania roundhouse at 37th Street made the park a dirty, sooty environment.

The primary tenant of the park was the Railroad YMCA, which rostered a football team from the local neighborhood. American railroads and the YMCA had a very close working relationship during the first half of the twentieth century, and the Pennsylvania Railroad was no exception. YMCA locations were often situated near railroad facilities such as stations, major junctions, and freight yards and many featured bunkhouses which offered cheap lodging. These bunkhouses were used by railroad passengers and employees alike, and were especially useful for over-the-road train crews arriving from their home terminals. Eventually, these locations became more than just hotels for traveling train crews as the YMCA moved to create a sense of greater camaraderie and Christian fellowship among these men who traveled frequently and were away from home for long periods. YMCA chapters began to introduce sports teams for local residents and railroad workers alike to compete among one another in healthy, friendly environments.2

The PRR Philadelphia YMCA football team was created out of this movement toward “wholesome athletics” which united members of the local community with railroad workers. The Pennsylvania Railroad football club of Philadelphia actually predates the creation of Penmar Park and the creation of the YMCA team by several years. Contemporary records set the team’s inaugural year as 1886, a full seventeen years before Penmar Park was even constructed. The PRR Philadelphia team played for several seasons as a strictly railroad-sponsored organization and faced opponents who were also sponsored by railroad companies. This changed on April 13, 1894, however, as the newly constructed YMCA merged its football team with the PRR’s to create the PRR YMCA Philadelphia Football Club. Then new, the YMCA was located at the corner of Westminster Avenue and 41st Street in the Parkside neighborhood of West Philadelphia near the site of the future Penmar Park. This YMCA served PRR employees at the nearby 37th Street Yard and ZOO Interlocking for years to come.3

The PRR Philadelphia YMCA had a veritable complex of buildings and properties both within the city and in its vicinity. Aside from Penmar Park, the Philadelphia facilities included the main YMCA building on 41st Street, the Broad St. Station Annex (located in the Broad St. passenger station in Center City Philadelphia), the country club in Downingtown, and the seashore camp in Ocean City, NJ. These facilities were furnished with recreational areas, gymnasiums, showers, bunkhouses, and even railroad training facilities. Together, they provided a relaxed, friendly atmosphere in which railroad workers and their sons could spend time, socialize, and compete in sporting events. Penmar Park played a central role in the YMCA’s operations, as it provided a venue for outdoor sports not easily accommodated elsewhere. As a 1904 periodical describes the park, it was far more than a football field. William Patton was the chairman of the PRR YMCA at the time, and he furnished this description of Penmar Park International Railway Journal:

“The athletic field is one of the largest and finest in [Philadelphia]. It contains a club house [sic] provided with shower baths, steel lockers, dressing rooms, etc; baseball diamond, football gridiron, running track, straightaway, five tennis courts and a grand stand [sic], with seating capacity of 4,000.” 4

This baseball facility was under-utilized at best from the time of the park’s construction, yet this would change in 1936 when the PRR leased the park to its most famous tenant ever.

By 1936, Penmar Park had aged considerably since its 1902 construction. Despite this, the YMCA maintained the facility to a usable level. One major improvement made to the facility was the installation of powerful spotlights which enabled nighttime play. This task was undertaken in 1933 at the behest of local coach and sports legend Eddie Gottlieb. This seemingly minor improvement transformed Penmar Park into a serious athletic facility with the capability to host large games. The local Negro League team took notice of this, and in 1936 they leased the field from the Pennsylvania Railroad YMCA. Thus, Penmar Park became the new home of the Philadelphia Stars baseball team. The PRR would continue to lease the entire complex to the Stars annually until 1950.5

Though the park was maintained to an adequate level, it was never manicured. The grass was allowed to grow very high as the PRR felt compelled to mow it only infrequently. Its proximity to 37th Street Yard and ZOO Interlocking made for a smoky environment, as the railroad used a combination of both electric and steam locomotives in the area. The ambience must have been loud as well due to the park’s location adjacent to the busiest interlocking junction in North America- trains likely shook the grandstand with their passing. Furthermore, the entire grandstand and field must have been sooty and caked with cinders from passing trains. Undoubtedly an untold number of outfielders lost fly balls of made errors due to the painful experience of removing coal cinders from their eyes.6

The atmosphere at Penmar Park was far from inviting, yet its appearance was not at all indicative of the role this venerable field would play in the development of American baseball. This humble field, with its long grass and smoky environment, was to be a veritable colosseum where the Philadelphia Stars Negro League team grew and developed. Several notable games were played here and numerous Negro League greats graced its diamond during its relatively short lifetime. Among the most famous of events that occurred here was Satchel Paige’s near-perfect game. In the summer of 1947, Paige took the mound at Penmar Park and pitched a perfect game through eight innings. Feeling assured of himself, Paige intentionally walked three batters in the ninth. In perhaps the greatest instance of showboating there was, Satchel Paige signaled for his fielders to sit down on the field. They obliged, and Paige proceeded to strike out three batters in a row- by throwing nine pitches.7 All this excitement unfolded in the smoky environs of a forty year-old ballpark beside the railroad tracks in West Philadelphia.

Almost no records of Penmar Park exist later than 1950, indicating that the stadium was likely torn down or abandoned by then. At some point in the latter half of the twentieth century, Penmar Park and the entire YMCA complex was demolished. On Parkside Avenue today there is no trace of the facility save for a statue, a mural, and a Pennsylvania Historical and Museum Commission marker. Aside from these memorials, Penmar Park lives on only in memories and stories like those of Miss Hattie Williams, the legendary hot dog vendor who supposedly cooked her hot dogs using a fire stoked by wood from the grandstand.8 For all its storied history, the PRR YMCA athletic facility at North 48th Street and Parkside Avenue stood as a stalwart monument to athleticism in West Philadelphia. It was a sturdy, dependable park yet also a gritty one. Penmar Park was both a Philadelphia institution where local railroad workers and their sons could bond over friendly sport and a Negro League icon where famous players accomplished great feats. This humble park served its purpose well and provided the employees of the Pennsylvania Railroad as well as the people of the City of Philadelphia with great memories and good times.