Franklin Field lies in Philadelphia at the eastern edge of the University of Pennsylvania’s campus, across the Schuylkill River from Center City. The historic stadium dates back to 1895 when wooden bleachers for the Penn Relays, football matches, and other events were constructed. Demonstrating the rise of college football in the early 20th century, the stadium was dramatically expanded in 1922 to become the two-tiered stadium with the same brick arches one sees today. The NCAA has designated Franklin Field as the oldest college football stadium still in operation, and the stadium also holds the honor of being the first stadium to broadcast a football game over the radio. Aside from the Penn Relays and the University of Pennsylvania’s football team, the Philadelphia Eagles were tenants from 1958 to 1970. The Democratic Party, the band U2, and numerous features in movies and television shows add to Franklin Field's historic story. 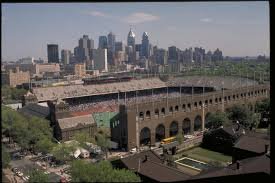 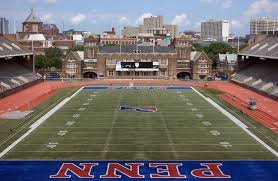 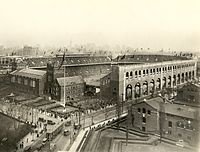 Franklin Field was opened for the University of Pennsylvania in 1895. At that time, it was a simple wooden bleacher designed for the first running of the Penn Relays. The stadium's cost was $100,000 ($2.8 million today) and it became the first stadium in the United States to have a functional scoreboard. In 1922, Franklin Field was completely redesigned by Frank Miles Day and constructed as a more permanent structure for the university. The redesign included more of an ornamental exterior, consisting of high open arches and Italian-style brick and mortar work. Internally, a two-tier seating arrangement was introduced, making it the first stadium with an upper deck of seats.

The stadium was not a large financial burden to the university. The University of Pennsylvania’s Athletic Association balance sheet surviving from June 30th, 1896 provides insight on how the financing for Franklin Field took place. Football receipts showed the largest income to the university, supporting over half of the cost for the entire varsity sports programs. All the other sports teams did not add up to a third of football's financial resources at that time. Association dues, contributions, and building donations from wealthy alumni bridged the gap and lessened the overall cost.

Franklin Field was a reflection of the growing popularity of team sports and football. In 1916, George Neitzche introduced a plan to build a 100,000 seat half-sunken stadium for $750,000 on the southeastern side of Woodland Cemetery. Neitzche’s plan fell through because of its cost and complexity, as the new design would also require a new public transport station called Union Station which featured a Pennsylvania Railroad stop and an elevated subway line connected to the Market- Frankfort line. The University of Pennsylvania chose instead to renovate Franklin Field with Frank Miles Day’s design.

Franklin Field is central to the origins and growth of college football from a popular diversion that provided bragging rights for Ivy League universities to a sport that transcends academic institutions. The University of Pennsylvania Quakers are one of the original teams to compete in intercollegiate football. The oldest stadium in the United States still in use today, Franklin Field has hosted 1,364 football games as of the time of this article. The Quakers early teams included players like Chuck Bedinark and John Heisman, namesakes of college football’s highest awards.

From 1958 to 1970, the National Football League’s Philadelphia franchise, the Eagles, had many memorable moments in the stadium. The team witnessed Vince Lombardi’s only playoff loss, Bert Bell’s heart attack, and the infamous (and highly-disputed) case of Philly fans booing and throwing snowballs at Santa Claus. The famed Army-Navy game was held at the stadium eighteen times from 1899 through 1935. Even though the annual game between service academies is longer played at Franklin Field, the city of Philadelphia still serves as a neutral site for the historic rivalry. When the FIFA World Cup was held in the United States in 1994, Franklin Field was in consideration to be used in the tournament but did not make the final selection. The stadium also hosted an international rugby match on the 30th of November 2004. Even though the United States lost the match to Australia, the close result raised the profile of the men's national team.

Some important events that have taken place at Franklin Field include the yearly Penn Relays, the 1936 Democratic Party nomination, concerts by famous musicians and bands such as U2, and movie cameos. The Penn Relays is one of the oldest, largest, and continuing track and field events in the country. They first were held on April 21, 1895, one of the main reasons why Franklin Field was built. An average of 15,000 participants attend yearly from high schools, colleges, and track clubs throughout North America and abroad compete in more than 300 events over five days. Attendance typically tops 100,000 over the final three days and has been known to surpass 50,000 on Saturday. Historically, the event has been credited with popularizing the running of relay races. The first team to win a Penn Relays championship was Harvard University after they defeated the University of Pennsylvania with a time of 3:34 in the 4x400 meter. Other colleges that competed in the first meet were Cornell University, Columbia University, Lafayette, Lehigh, Rutgers, Swarthmore, College of the City of New York, and New York University. In 1936, President Franklin D. Roosevelt accepted the Democratic Party’s nomination for a second term as president. It is estimated that a crowd of about 100,000 sat through a light rain to hear his speech. In 1997, Franklin Field hosted Irish band U2 during the first leg of their Pop Mart tour. This was the stadium’s first concert since 1970. The 2000 M. Night Shyamalan-directed movie Unbreakable prominently features Franklin Field as one of the main locations in the film. The film's main character, played by Bruce Willis, plays a security guard at the stadium. In the 2006 movie Invincible, Franklin Field served as a stand-in for the demolished Veterans Stadium, images of which were digitally created on some of the football action sequences, and pays homage to one of the Eagle's original stadiums.

There were changes in stadium design over time, but the overall structure has remained the same. Some major points in the evolution of stadium design include the original wooden grandstands in 1895, permanent grandstands and a scoreboard in the years 1903-1905, and the final two-tier brick design in 1922. Franklin Field maintained a grass field until 1969 when it switched over to AstroTurf. It was the first National Football League stadium to use artificial turf. The stadium's fifth AstroTurf surface was installed in 1993. The current Sprinturf field replaced the AstroTurf in 2004.

Center, U. A. (1995-2017). Unversity of Pennsylvania. Retrieved from University Archives & Records Center: http://www.archives.upenn.edu/people/1800s/day_frank_m.html

Past Stadiums. (2001-2017). Retrieved from Stadiums of Pro Football: http://www.stadiumsofprofootball.com/stadiums/franklin-field/