PNC Field is a Minor League stadium for the Scranton Wilkes-Barre RailRiders. The stadium was known in the past as the Lackawanna County Stadium, and was home to the Indians, Scranton Miners, Scranton Red Sox, Red Barons, and finally the RailRiders. It was designed by EwingCole who described the $40 million renovation as, "demolishing everything but the lower seating bowl, playing field, and the home clubhouse, which was rebuilt in 2005." 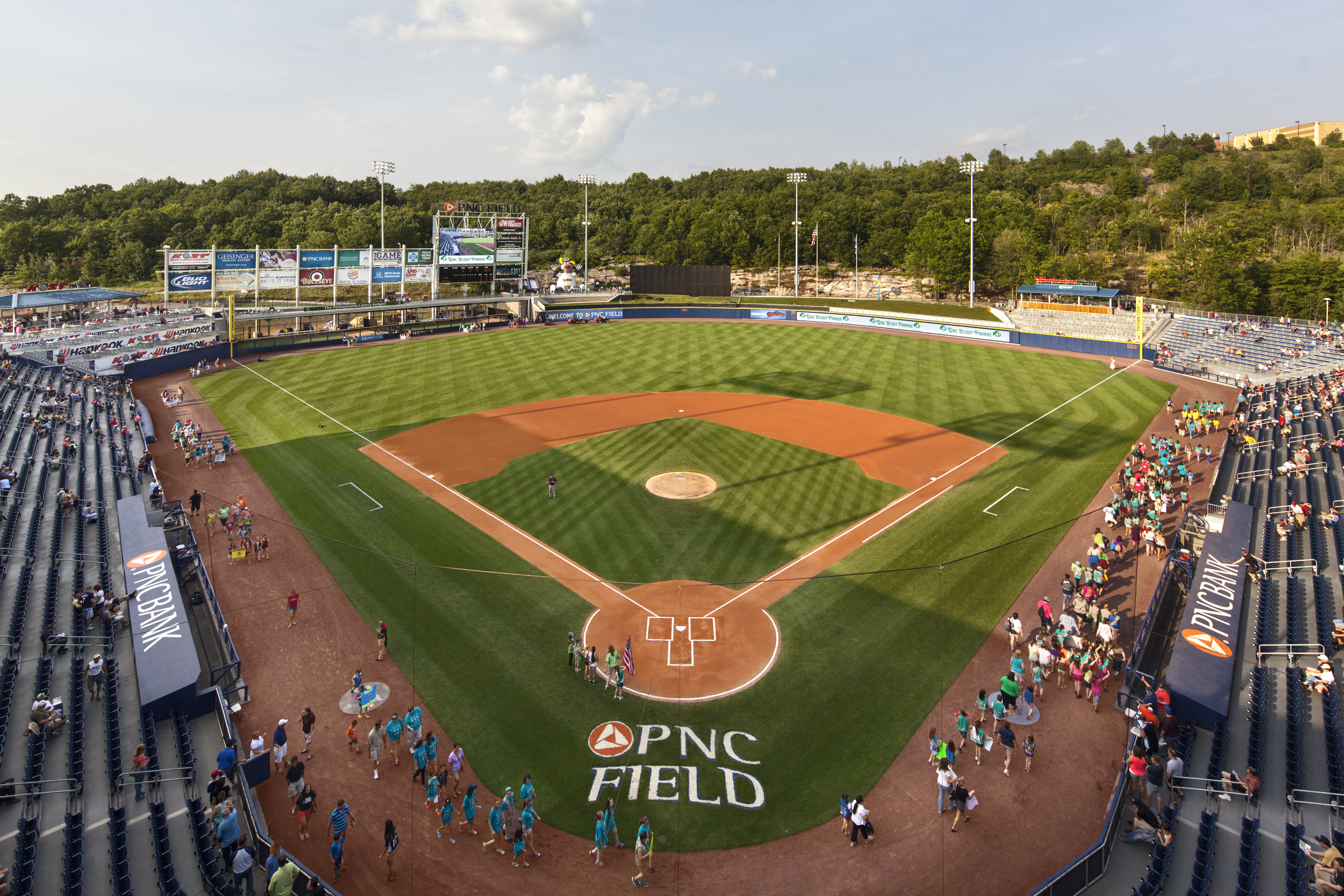 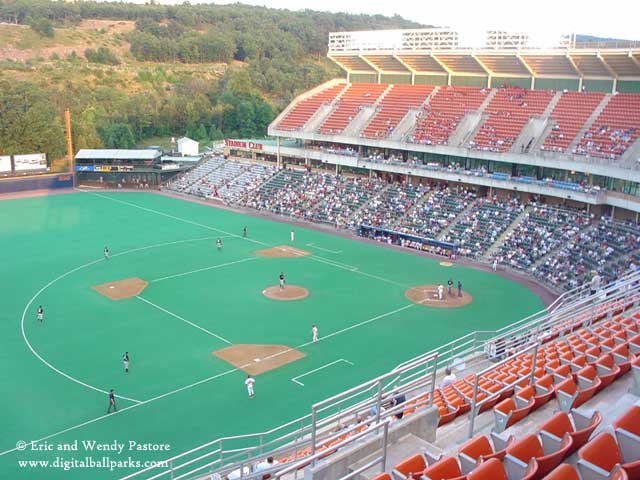 PNC Field is located at s 235 Montage Mountain Road, Moosic, Pennsylvania, 18507.  The history of the field is one of economic problems, team affiliation changes, and a change in county owner. The field has also been through one major, almost complete, renovation by the firm EwingCole. Through all of this, PNC Field remains a key component in Minor League Baseball in the Northern Division of the International League.

The stadium was previously known as the Lackawanna County Stadium and was the home of one team under many, many different names. To begin the history of these Scranton-based teams we need to travel back to 1887 to the team named the Indians.  They competed in the International League. This name didn’t stick, and in 1888 the name was changed to the Scranton Miners who competed in the Central League, Pennsylvania State League, Eastern League, Atlantic League, New York State League, New York Penn League, and the Eastern League.  The Scranton Miners were then renamed to the Scranton Red Sox, then the Red Barons, and finally the RailRiders.  The Scranton-based teams were, for a time, the Triple-A affiliate for the Pittsburgh Pirates, then the Philadelphia Phillies, but were later in contract with the New York Yankees from 2007 onward to present day.

The former Lackawanna County Stadium was designed by GSGSB Inc.  It was constructed by Melon Stuart Construction and served the Lackawanna and Luzerne Counties from 1989 to 2006, when its age finally forced Lackawanna County to sell the team and use that money to build the new PNC Field that has served the SWB area from 2007 to current day.  Economic problems were also resolved in an agreement with PNC Financial Services Group, Inc.  The Multi-Purpose Stadium Authority (the actual owner of the stadium) sold the naming rights as well as advertising rights in a three-year agreement that began in 2006 and was again renewed in 2010. The initial agreement was a 1.1 million dollar agreement that renamed the facility to PNC Field while also allowing the company to install PNC Bank ATMs through the entirety of the complex, as well display banners, broadcast advertising, and using players’ appearances to benefit their company.  This agreement helped to fix the funding problem to maintain the stadium while also helping the PNC Bank business.

Lackawanna County Stadium was a two-tier stadium. The upper level seating was orange while the lower level seating was green.  It had a max capacity of 11,000 people.  It cost 22 million dollars to construct the massive stadium and was financed through both the Lackawanna County secured bonds and state grant money.  The stadium was strategically placed equally between the Scranton and Wilkes-Barre areas to gain attendance from both communities.  This location is key when the goal is to sell as many tickets as possible to create high attendance to a baseball game. The designers of the stadium took cues from Philadelphia’s Veterans Stadium.  This would begin to create visual ties between the two stadiums as well as with the Red Barons and their Major League counterpart, the Philadelphia Phillies.  Similarities of the two parks include field dimensions as well as the fields being turf instead of real grass. These ties were later broken when the team’s affiliation to the Phillies was broken after an 18 year agreement for an affiliation to the New York Yankees.

Through the remodeling of the Lackawanna County Stadium came PNC Field.  PNC Field was designed by EwingCole and was constructed by Alvin H. Butz, Inc.  EwingCole describes the $40 million renovation of the former Lackawanna County Stadium as, “demolishing everything but the lower seating bowl, playing field, and the home clubhouse, which was rebuilt in 2005.”  The new PNC Field can seat a maximum of 10,500 people while the previous stadium could seat closer to 11,000.  This newly renovated stadium now also features grass instead of the turf that welcomed the Red Barons from 1989-2006.

From an architectural point of view, this renovation is quite major.  The previous design of the stadium included an upper deck, which would seat an approximate 500 extra people in the stadium.  This loss of seating would affect the profitability of the stadium.  One benefit to diminishing the height of the stadium is it no longer feels so megalithic and impeding.  The stadium begins to feel as though it belongs in the site that it stands on.  Losing the upper deck also starts to create a more personal and intimate dialogue between the viewers and players of the national pastime.

The renovation process began with removing light fixtures, wiring, and also the upper-level seating.  These pieces of the stadium renovation are not salvageable, and so, there is no savings.  To contrast, the majority of the steel that is deconstructed and removed would be sold to begin to offset the large cost of the construction of the stadium.  The deconstruction of the former Lackawanna County Stadium would begin on the first base line and work its way backwards moving down the baseline to third.

Aside from being a place to play and watch baseball, PNC Field is now used for events such as the PIAA District II championship games as well as high school football games.  The field is even used for events outside of sports to include regional band competitions, ice skating, and local and regional car shows.  PNC Field remaining a multipurpose stadium gives it the opportunity to gain its income outside of the oftentimes limiting baseball season.  This creates extra revenue for the stadium and keeps interest in the area high and activity and involvement in the field fresh.

Some of the more influential players to the game of baseball who have appeared on the field include Derek Jeter, Jeromy Burnitz, Jason Isringhausen, Archbald “Moonlight” Graham, Stan Kovelski, and Andy Ashby (former All-Star pitcher playing with the Red Barons as well as many other major league teams).

Although PNC Field has a history of economic problems, team affiliation changes, and a change in county owner, it remains in the spotlight of NEPA sport’s history.  The stadium that once resembled the Philadelphia Phillies’ Veterans Stadium is now almost unrecognizable after the major 40 million dollar renovation that transformed the stadium from a two-level turf field to a single level grass field.  These renovations allowed the stadium to create a more intimate and personal dialogue between the game-goers and the players.  PNC Field will remain an attraction in the Scranton-Wilkes-Barre area for anyone looking to engage in the national pastime.