There are numerous ghost towns to be found in Colorado, but few are as well preserved as Independence. Roughly sixteen miles east of Aspen, Independence boomed between its founding in 1879 and about 1890, an extraordinarily short period of time even by the standards of short-lived boom towns. Today the site is listed on the National Register of Historic Places.

Independence was all but completely abandoned following a storm in 1899, just twenty years after its founding. 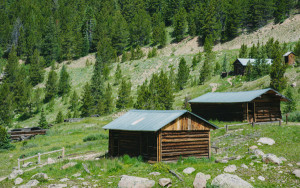 While many of Colorado’s boom towns made their fortune in silver, Independence was based around gold. Prospectors discovered gold in the area in the summer of 1879, and within a matter of months there were several hundred people living in the camp.

By 1881, there were roughly 500 people living in Independence, and the town had four grocery stores, four boarding houses, and a few saloons. Within another year, there were three post offices in Independence and a population of 1,500. The town also had its own newspaper, the Independence Miner.

As with most boom towns, however, the prosperity of Independence didn’t last long. The settlement is located at an elevation of nearly 11,000 feet above sea level, which meant that living there was a challenge for even the hardiest souls. By the 1890s, many relocated to Aspen, with a comparatively mild climate and more opportunities for work.

In 1899, the area was struck by a devastating storm, the worst one in Colorado’s history at that point. The miners who remained in Independence were stuck and running low on provisions and were forced to dismantle their homes and fashion skis from the wood. By 1912, the town was deserted. The site is now listed on the National Register of Historic Places.