Katahdin Iron Works was a short-lived iron operation built in 1853. At its peak, over 400 men worked for the company, with 200 families living in the company town. The area soon became a frequently visited area, with a hotel built for those coming to visit the local springs that were rich in minerals. Katahdin Iron Works had to close in 1890 due to competition, after struggling with its rural location. All that remains today is the original blast furnace and one kiln. 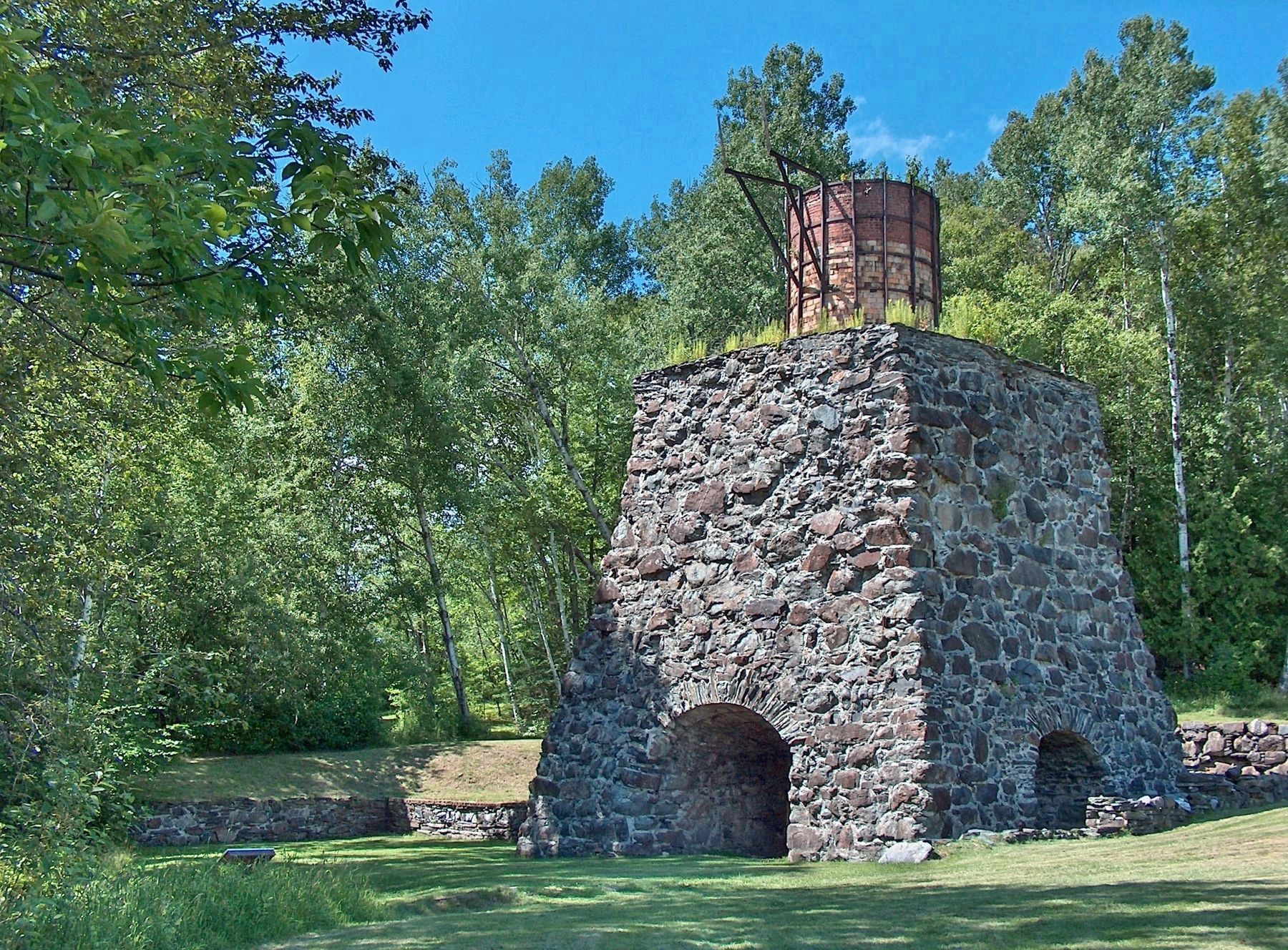 Settlers entered Brownville, Maine in 1815. In 1841, Samuel Gompers built a road from Brownville to the nearby Lake Silver, where he began construction on a company town. This town included a sawmill, boarding house, cooperative store, town hall, school, post office, and stables. There was even a photographer’s salon. Enough homes were built to house 200 families. After the town was built, stonemasons were hired in 1853 to build a 55-foot-high rock blast furnace with water-powered blowers. They also constructed 18 stone kilns for production of pig iron. This wooded area was ideal for converting wood to charcoal that could be used in this production.

The iron was crushed for smelting in the ore kiln and then dumped into the furnace. Once the ore was in the blast furnace, the iron ore was heated until it was reduced to molten iron. Once the molten iron pooled at the bottom the furnace, workers ran the ore out of the furnace and only sand. Since the iron landing on the sand sounded like a pig squealing, the workers referred to the iron as “pig iron.” After the iron cooled, it was shipped to Bangor, Maine by train to market.

At the height of Katahdin Iron Works’ production in 1884, 400 men were employed, and the town housed over 200 horses and oxen to aid with hauling wood. The Silver Lake Hotel opened in nearby Brownville, and the area became advertised for its local springs rich in Iron and Sulphur, along with the area’s vast array of outdoor sports offerings. This success was short-lived, however. From the start, KIW had to overcome their remote location and the difficulty of transporting the iron. They also struggled with smelting the local iron and sulfide ore. Even the construction of the railroad to lower transportation costs did not stop KIA from closing due to competition in 1890. Most townspeople moved, and the Silver Lake Hotel burned down in 1913. The General Chemical Company leased the area in 1927 as a reserve source of Sulphur, bought the land in 1952, and donated the land containing the blast furnace to the State of Maine.

Since this land was donated, Katahdin Iron Works has been a historic site. The Maine Bureau of Parks and Lands manages it. The Allied Chemical and Dye Company of New York has preserved the blast furnace. Visitors are welcomed to this area, and many other opportunities are still available in the area. Gulf Hagas, part of the Appalachian Trail is in the vicinity, along with camping areas in some 35 acres that are home to some of Maine’s oldest white pines.