Queen Liliuokalani was the first female monarch to take the throne and became the last ruler of the independent kingdom of Hawaii. Liliuokalani would be remembered for her attempt to preserve the kingdom's independence and her love of the Hawaiian people. She is also known as a poet, musician, and leader who helped to craft a new Constitution to preserve the monarchy. She confronted sugar planters who supported annexation by the United States in ways that put her against many well-established American companies and wealthy families who hoped to seize power and present the island to the United States government for annexation. US Marines supported a coup led by people representing planters and others that saw Queen Liliuokalani’s palace surrounded by armed men. Liliuokalani agreed to step down from her throne to prevent bloodshed under the terms that she would be allowed to present her perspective to Congress. Queen Liliuokalani won over many American leaders and even convinced the President that the coup was a violation of Hawaiian sovereignty. The question of whether or not to annex Hawaii became a leading political issue until the Spanish American War. At that time, Hawaii was seen as an important strategic location as it was halfway between the Philippines and America's West Coast. Congress supported annexation after the war and Hawaii became a US territory in 1900. Liliuokalani spent the rest of her life as an advocate of forgiveness although she still opposed annexation and worked to preserve some measure of political self-determination and cultural independence for Native Hawaiians. Queen Liliuokalani worked to preserve Hawaiian traditions: writing and playing songs, sharing her cultural heritage, and helping people in need. Before her death, she established the Liliuokalani Trust to be used to help orphaned Hawaiian children. Queen Liliuokalani said this in her memoir, "I could not turn back the time for the political change, but there is still time to save our heritage. You must remember never to cease to act because you fear you may fail.”

Queen Liliuokalani was the first female monarch to take the throne and the last of the Hawaii kingdom’s rulers. 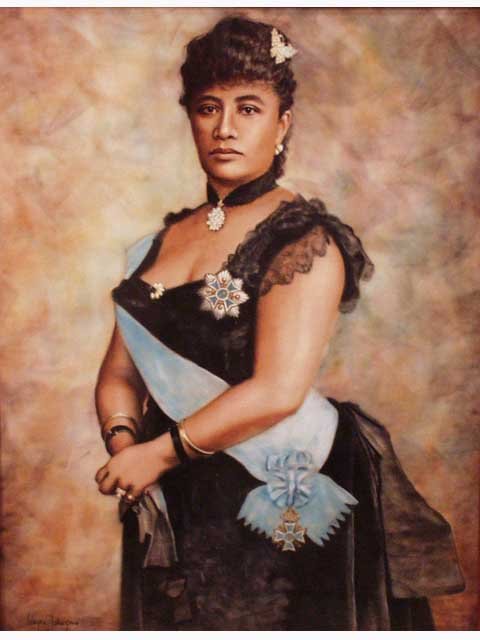 “The Hawaiian people have been from time immemorial lovers of poetry and music, and have been apt in improvising historic poems, songs of love, and chants of worship so that praises." 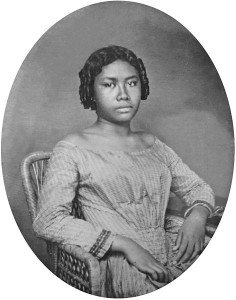 In face of war, she kept the peace to save her people and heritage. She promoted a Consitution for the people of Hawaii to be free and capable to make the right decisions. 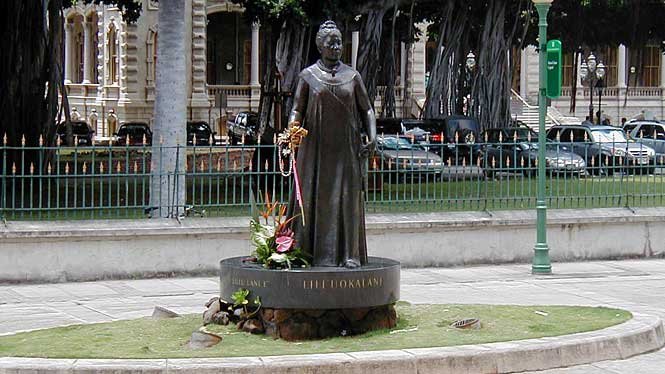 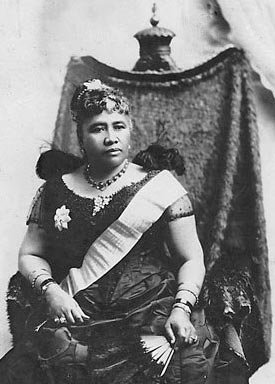 “There is an extinct mountain in the background of the city of Honolulu, which is known as the “Punch- Bowl”. On the ground lays the Queen’s Hospital (named after Queen Emma of Kamehameha IV) was Queen Liliuokalani was born, Sept. 2, 1838. Liliuokalani’s chosen name at birth was Lydia Liliʻu Loloku Walania Wewehi Kamakaʻeha.” According to Hawaiian culture, parents gave new names to their children, giving thoughtful consideration to their meaning. Traditionally, names usually come from dreams or visions. Events before or during a child’s birth were thought to be momentous in the naming process. In the Queen's case, her aunt had formed an eye infection during her birth. “Therefore, “Liliʻu” means “starting”; “Loloku”, “tearful”; “Walania”, “a burning pain”; and “Kamakaʻeha”, “sore eyes”.” Although many people can find naming a child after an eye infection as strange, Hawaiian culture does not recognize these names as “unlucky” or “terrible”; they celebrate the time of the child’s birth.

Immediately after Queen Liliuokalani’s birth, she was taken to the house of another chief on the island, where she was adopted by her foster-mom, Konia, and her foster- dad, Paki. She didn’t meet her birth parents until later in life. Her royal heritage comes from her birth father “one of the high-ranking chieftess who served as an adviser to King Kamehameha III.” She had one sister who was raised with her Bernice, and over ten other siblings she never truly knew till later. They were also adopted by other chiefs. Continuous adoption, she mentions in her memoir, may seem strange to other cultures. However, this was completely normal to Hawaiian life. By the age of four, she went to Royal School, a boarding- school run by missionaries for children who had a claim to a throne. Queen Liliuokalani learned the proper use of the English language and was sent to bed hungry some nights. “A thick slice of bread covered with molasses was usually the sole article of their supper,” Queen Liliuokalani said in her memoir. She remembers looking in the gardens with others for esculent root or leaves they could cook. Her next educational experiences would be better suited for her mind. 1-17

As a young girl, Queen Liliuokalani was a “studious girl”; her passion became acquiring knowledge, especially musically. Queen Liliuokalani said, “The Hawaiian people have been from time immemorial lovers of poetry and music, and have been apt in improvising historic poems, songs of love, and chants of worship so that praises of the living or wails over the dead were with them but the natural state of their feeling.” When she was in school, her instructors recognized her love and ability in reading music. Composing became “natural as breathing.” Queen Liliuokalani wrote multiple compositions; she began to lose count. She is credited with over 160 songs, including one of her cherished songs “Aloha ‘Oe.” She would retain her interest in music and poetry, producing more than 160 songs throughout her life, including the beloved "Aloha 'Oe" (“Farwell to Thee”), which can be heard in the Disney Channel film “Leo and Stich.” The song is a parting between two lovers. Queen Liliuokalani observed Colonel James Boyd and a young girl Maunawili in a loving farewell. When she made her way up a cliff, down a valley, and into the whirling winds back to Honolulu, she began to hum a dreamy tune. She also created one version of the “Hawaiian National Anthem,” it would remain the song of the nation for twenty years until her brother composed the words of Hawaii Ponoi. He was the king at the time, and he was the one to give directions to the band.1-17

Her brother, King Kalakaua started ruling on February 12, 1874. He organized the negotiation of a treaty of closer alliance with the United States. Before they left home on their first trip to America, King Kalakaua appointed a judge and minister to submit a treaty to the United States. However, the homeliness of America would soon change gears. King Kalakaua was held at gunpoint and forced to sign a new constitution. It became known as the “Bayonet Constitution”; it diminished the control of the Hawaiian monarchy, and only allowed men of a particular heritage could vote. After King Kalakaua passed in 1891, Queen Liliuokalani was declared queen; “the first female monarch of Hawaii to rule in her own right.”1-17

She saw the need for her country to have a new constitution, which challenged the unlawful rules of the Bayonet Constitution. The constitution has 81 articles including (1) All people were free to worship God according to their own beliefs. This was considered a sacred privilege, and must not be used to disrupt peace or safety of Hawaii. (2) The Queen is the Commander a Chief of the Army and Navy; she would be the one to appoint officials and train and lead forces to defend the kingdom. However, she cannot declare war without the permission of the legislative assembly. (3) The only people who are not allowed to vote are those who commit crimes. People were allowed to vote no matter their ethnicity. Queen Liliuokalani also continued to challenge other laws prohibiting the practice of the Hawaiian language in schools, and get back “voting rights for nonwhite laborers”. However, her constitution would never be used. The United States and sugar planters saw this constitution as a threat, and used its non-democratic terms as an excuse to take control of Hawaii and create a new government that was opposed by the majority of islanders.