The Old North Church houses many gardens, one of which is the Memorial Garden. Opened in 2006, the Memorial Garden was the nation’s first public memorial honouring the American lives lost in Operation Iraqi Freedom and Operation Enduring Freedom in Afghanistan. Today the memorial features nameless dog tags to symbolise the number of fallen American soldiers, totalling 6,884 as of July 4th 2016. 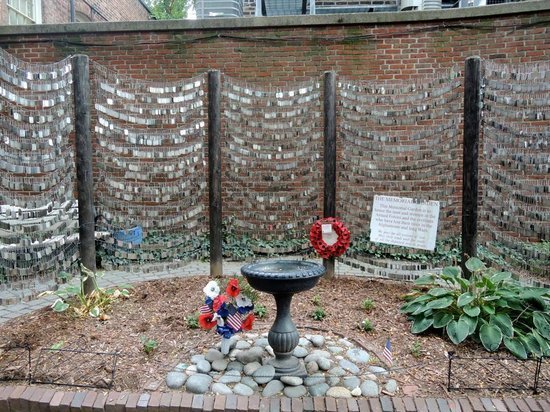 These dog tags produce a wind chime like sound 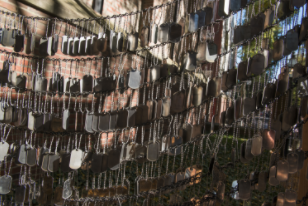 Operation Enduring Freedom in Afghanistan began on October 7th, 2001 with Allied air strikes on Taliban and al Qaeda targets. This was in response to the 9/11 attacks on the United States, which were linked to al Qaeda, an organisation linked to the Taliban in Afghanistan. This was the start of the global ‘War on Terror’. The operation formally ended after 13 years on December 28, 2014 after President Obama announced its close during May 2014. The total number of American deaths is 2,403 as of 2017.

Operation Iraqi Freedom officially began on March 20th, 2003 after President Bush announced that US-led coalition forces had begun military action in Iraq three days previously, on March 17, 2003. This was because the U.S Secretary of State, Colin Powell, made the case to the U.N that Saddam Hussein posed an imminent threat. Despite the UN Chief Weapons Inspector Hans Blix reporting to the Security Council that his team had found no evidence of weapons of mass destruction in Iraq, President Bush issued an ultimatum to President Hussein and his family – leave Iraq in 48 hours or face military action.  This operation would continue till December 18, 2011 when the last US troops crossed the border into Kuwait. The total number of US casualties for this operation is 4,424 as of July 29th, 2016.

In 2006, the Old North Church and its neighbours created the nation’s first public memorial to the soldiers who lost their lives in these two operations. Initially the memorial consisted of wooden ‘popsicle stick’ crosses and stars of David that were marked with the names of the fallen soldiers. However with an increase in deaths in 2006 and 2007, the creators of this memorial sought a more durable and less laborious alternative and hung blank dog tags on chains between the fence posts. This new method of memorialization was more likely to survive the New England winters and also invited participation from people in the surrounding neighborhoods.

The new plan included a meditation bench along with a small garden and a walkway. Construction for this new memorial began in mid-May 2007 and the memorial was fittingly dedicated on Memorial Day of that year. Before the new memorial was dedicated, the organisers set up tables with nameless dog tags and invited people to help them string up the dog tags as they walked through the courtyard. The website for this memorial states that on the day of the dedication, during the reading on the fallen soldiers from Massachusetts, a light breeze went by and the dog tags acted as a wind chime.

The memorial includes a birdbath, which is meant to symbolise the water of life, as well as some flowers. The foliage displayed is in red and white, the red flowers are meant to represent the bloodshed and sacrifices of war, whereas the single white flower represents the hope for peace. There is also a large ‘peace’ stone that is centrally placed under the birdbath. The remaining stones placed at the foot of the birdbath are inspired by the Jewish tradition of leaving stones at grave sites to symbolise prayers. The stones are also marked with the number of Massachusetts deaths during the given years. Today, whenever an American soldier falls during the Afghanistan or Iraq/ISIS conflicts, a gardener from the Old North Church hangs a dog tag in memoriam. The tags try to represent, as closely as possible, the number of deaths and currently total at 6,884 as of July 4th, 2016.