The John Ward House was constructed in 1684 as a two-story structure with one room on each floor and a fireplace at one end. Ward was a leather finisher (called a “currier”) who likely emigrated to America from England around 1660 in order to avoid the plaque. The home was enlarged and a second gable was added to it shortly before his death. The property was passed on to his son, Benjamin. Over the next two centuries, it was used as apartments and as a bakery. In 1910, it was purchased by the Essex Institute, moved to its present location, and restored to its First-Period origins. The home was added to the National Register of Historic Places in 1968. 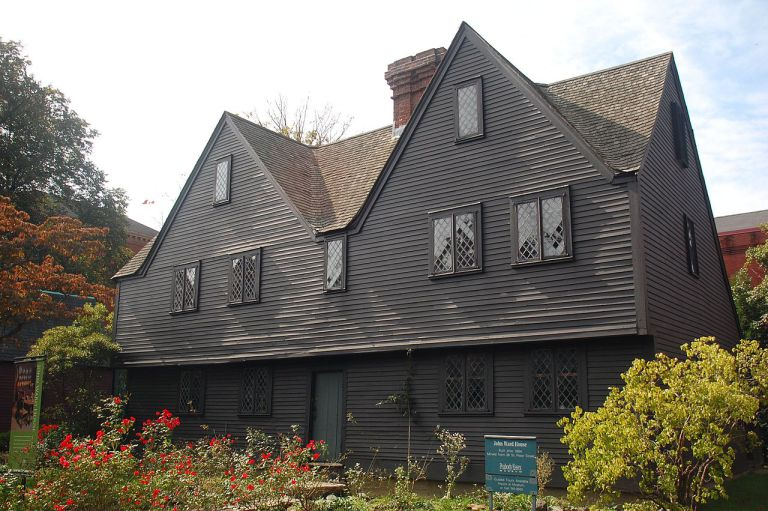 1906 photo of the John Ward House, before it was moved to its current location (photo courtesy of Lost New England) 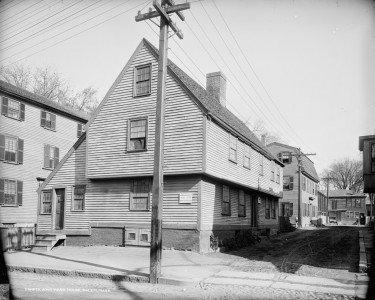 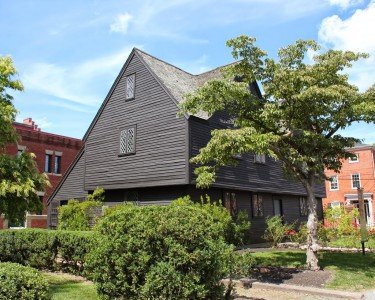 The John Ward House, now a historic house owned and operated by the Peabody Essex Museum (“PEM”), was originally built in 1684.  Its builder, John Ward (1653-1732), was one of the early colonists who emigrated to America from England around 1660 with his family. The plaque was returning to England at that time, and they likely traveled to the New World in order to avoid the disease.

Salem had been established about thirty years prior to Ward’s arrival. In 1684, he purchased an acre of land on Prison Lane.  Prison Lane is now called St Peter’s Street. He originally constructed a two-story home with one room on each floor. Over time, he added rooms to the right side of the chimney (which now placed it in the center, typical of homes during this era), a lean-to kitchen at the rear, a kitchen garden, and an outhouse.  The home also features a steep-pitched gabled roof. The second story juts out above the first story slightly. The windows feature small, diamond-shaped panes. This choice of glass is aesthetically pleasing as well as practical – the smaller the panes, the less likely they were to be destroyed while they were shipped from England to the colonies. After Ward’s death in 1732, the home was passed on to his son, Benjamin. Over the next two hundred years, the building served as apartments, a bakery, a storefront, and a studio gallery.

The characteristics of the house – the steep-pitched gables, large central chimney, asymmetrical appearance, diamond-shaped window panes – cause historians to categorize the home’s architecture as “First Period” or “Post-Medieval.” It is also interesting that the John Ward House was one of the earliest structures to be transferred from one location to another (in 1910) in order to preserve it for historical observation.  Its original location was on St. Peter’s Street, directly across the street from the jail used during the Salem Witch Trials.

According to the Peabody Essex Museum’s website, the John Ward House (along with others owned and operated by the PEM), are open for tours. However, the topics of discussion and times for guided tours at each of the homes may vary, so it is important to call ahead or visit the admission desk for more information. House tours are included with the price of museum admission.