The Ether Monument is located in the Boston Public Garden and commemorates the first use of ether as a general anesthetic at Massachusettes General Hospital in 1846. The monument consists of a columnn with inscriptions and a statue of ‘The Good Samaritan’ sitting atop it. The inscription reads “ To commemorate the discovery that the inhaling of ether causes insensibility to pain, first proved to the world at the Mass General Hospital in Boston, October AD MDCCCXLVI”. The monument was erected in March of 1868 after Thomas Lee, a retired merchant, hired an architect to build a statue that represents the elimination of human suffering.

The Ether Monument. (taken by www.friendsofthepublicgarden.org)

A close up of the Good Samaritan figure which sits on top of the monument. (taken by www.stock.photoshelter.com) 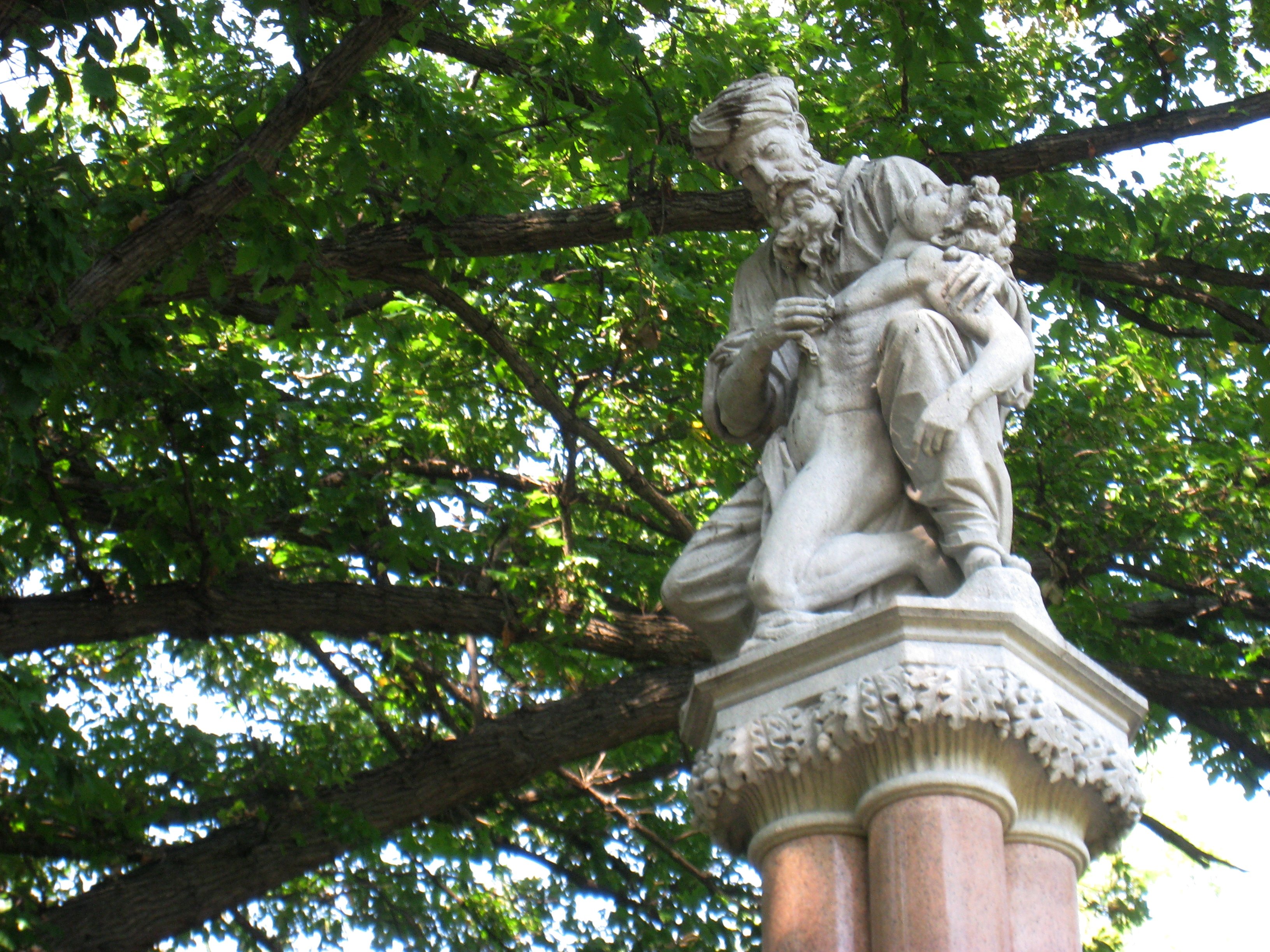 The Ether monument sits in the Boston Public Garden as a reminder of the advancements in medical science and technology regarding the use of ether as an anesthetic. Its inscriptions represent the past, the universal theme of suffering due to war, and the desire to alleviate the pain of the wounded.

In 1846, William Thomas Green Morton publicly demonstrated a medical operation with the use of the anesthesia, ether. After this occurrence, news of Morton’s demonstration spread throughout the world. Overwhelmed by achievement, the citizens of Boston wanted to commemorate the achievement that took place in their city by dedicating a specific site to the discovery. Around twenty years after the demonstration, Thomas Lee wrote a letter to the Mayor of Boston, Frederick W. Lincoln Jr, with a proposal of a monument in mind as “an expression of gratitude for the relief of human suffering occasioned by the discovery of ether”1  On March 19, 1866, Mayor Lincoln supported and approved Lee’s idea, because it represented one of the greatest medical discoveries of the time. Lee contracted out Boston architect Henry Van Brunt, and the Ether monument was erected “to immortalize the success of ether, a discovery that would lead to further triumphs in both surgery and infection control”2. The monument was a gift to the community of Boston as well as an everlasting reminder of the great medical discovery that would continue to alleviate the suffering of victims over time.

The monument commemorates the use and impact of anesthesia. There are many details that help to tell its story. At the bottom of the monument, there are lion-faced fountains which drain into a larger reflection pool. Mayor Lincoln liked this idea because it reminded him of the pool in Bethesda, Jerusalem where the sick visited when they needed to be cured of illness and deadly diseases. Inscribed on the monument is the phrase, “To commemorate the discovery that the inhalation of ether causes insensibility to pain. First proved to the world at Mass. General Hospital in Boston, October, A.D. MDCCCXLVI”3. At the top of the monument stands a statue of the Good Samaritan, a figure from the Gospel of Luke, “which encompasses the notion of helping a neighbor in need or bestowing mercy on others”4. There are four marble reliefs on each side of the monument.  They depict, “a wounded soldier in a field hospital, the Angel of Mercy descending to relieve suffering humanity, and the Triumph of Science”5.Since the monument was commissioned during the time of the Civil War, “the reliefs facing the north and south address the significance of general anesthesia during wartime”, interestingly it was the Civil War which propelled the widespread use of anesthesia throughout the country6

Many controversies surrounded the Ether Monument. William Morton wanted full credit for being the first to use ether during an operation, but Horace Wells and Morton’s advisor Charles T. Jackson M.D. both claimed responsibility for using ether as the anesthesia. Mark Twain weighed in on the debate and believed that Morton stole the discovery from his chemist and advisor and the “lie it tells will outlast it a million years”7. However, Twain can be viewed as not entirely correct because the monument is dedicated to the first use of ether during an operation, not the man who performed it.

Another controversy that surrounded the Ether monument was the “religious and moral uncertainty regarding the relief of physical pain”8. The Christian religion believes that eliminating physical pain and human suffering could potentially be seen as the work of Satan since historically, “pain was considered a manifestation of salvation and a means of divine punishment for sin”9. More specifically, the use of anesthesia during childbirth was controversial because the belief that women were supposed to suffer during childbirth to pay for Eve’s original sin in the Garden of Eden.

During the 1970’s the stature of the monument had started to seriously deteriorate. Leroy Vandam M.D., a Professor in the department of anesthesia at Harvard Medical School, noted the crumbling of the monument and went on to raise sufficient funds that ultimately led to the restoration of the monument. In the 1990’s, anesthesiologists banded together once again to raise money to contribute to the everlasting care of the monument. It was recently rededicated in 2006.10