Cheers Beacon Hill is a Boston bar made famous for its role in the American comedy, Cheers. It was established in 1969 and originally named the Bull & Finch Pub. Before gaining television fame, it was known to Beacon Hill locals as a quaint neighborhood bar. However, in the 1980’s, it caught the attention of producers looking to write a new television sitcom. They chose the Bull & Finch pub for the setting of their show, Cheers. The show ran on NBC from 1982 to 1993 for a total of 275 episodes. It enjoyed high ratings and quickly gaining a large following. As a result, fans flocked to the Bull & Finch Pub for its role in the series. Capitalizing on this fame, the pub took on the name Cheers Beacon Hill in 2002. It is located on Beacon Street and remains a popular tourist attraction today.

The iconic Cheers signage on a snowy day. The bar was originally known as the Bull and Finch Pub. 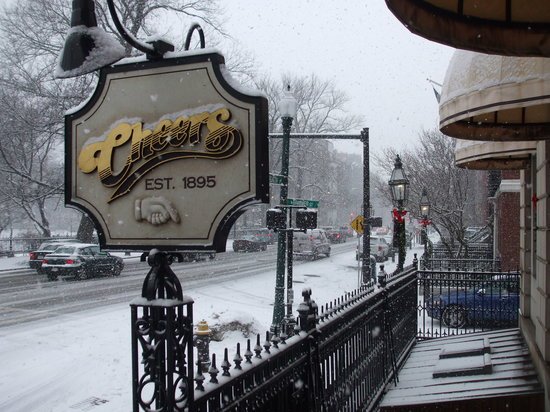 The inside of Cheers bar recreated from the set of the hit TV show. 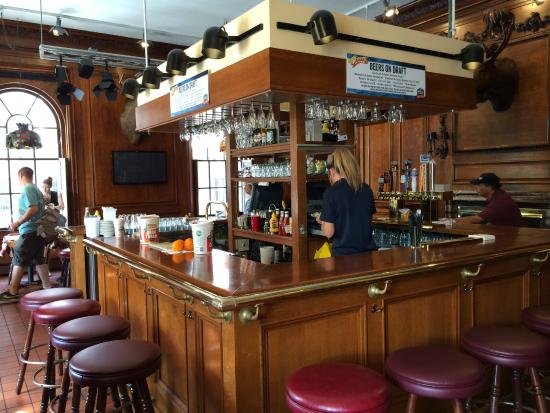 The cast of Cheers. 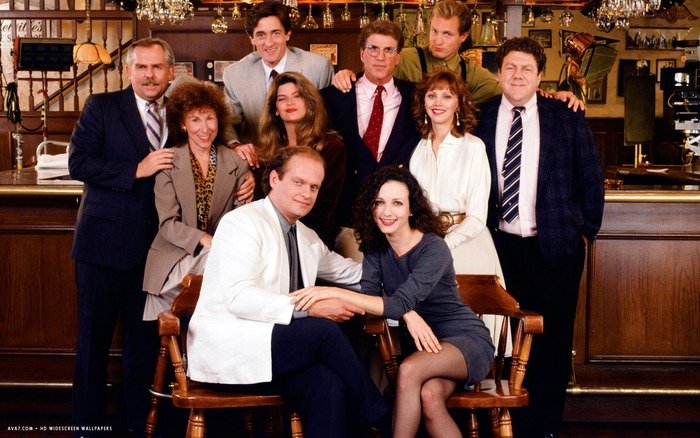 The Bull & Finch Pub was established in 1969 in the heart of Beacon Hill. It is located in the basement of the Hampshire House, a historic Boston mansion built in 1910 by architect Ogden Codman. The house acquired its name during World War II, when it was leased as a small hotel to the owners of the Lincolnshire Hotel on Charles Street. The two owners—both Englishmen—gave the mansion its title after the English county, Hampshire. Thomas A. Kershaw took ownership in 1969 and further promoted it as a luxurious space for events. For nearly a half-century, the Hampshire House has served as a gathering space for Boston’s elite.

The same year he took over, Kershaw established the Bull & Finch Pub in the basement of the mansion. The bar got its name from Boston-born architect Charles Bulfinch, the designer behind the United States Capitol building and the Massachusetts State House. Affectionately referred to as "the place where everyone knows your name," the small pub served Beacon Hill patrons for 20 years before its name changed. While the location remains a historic faction of the Hampshire House, its now better known for its role in the television show, Cheers.

The idea for Cheers was born in 1981. That year, writers Glen and Les Charles and directors James Burrows and Dennis Bjorklund set out to create a new television comedy. They wanted to come up with a workplace style sitcom in a “more appetizing” setting. Boston was chosen for two reasons, Bjorklund says of the decision. One reason was that only five short-lived television shows had laid claim to the city. The other was that, in the words of Bjorklund, East Coast pubs were “real neighborhood hangouts.” After settling on Boston, the producers visited a number of local establishments in search of a proper setting for their show. They ultimately decided on the Bull & Finch Pub for its comfortable and classic look, deeming it the “ideal American bar.”

The TV show premiered on September 30, 1982. It showed images of the Bull & Finch exterior with a Cheers placard out front. Kershaw, the bar’s owner, gave producers the right to use exterior images of the bar for only $1. However, the deal did not include any interior shots, meaning the bar’s insides look different from the setting in the fictional television show. Despite this fact, the show’s premier brought a flood of tourists. That same year, Boston Magazine chose the Bull & Finch Pub as Boston’s “Best Neighborhood Bar.” For the show's series finale on May 20, 1993, a large viewing party was held at the bar with the show’s cast and other celebrities in attendance.

Kershaw has since taken advantage of the show’s namesake. Through a licensing agreement with CBS studios, he sells shirts, mugs, hats, and other memorabilia branded with the Cheers logo. In addition, a modernized version of the show’s set was recently added to the ground floor of the Hampshire House. In 2002, the Bull & Finch Pub was officially renamed to Cheers Beacon Hill. With the success of this first location, Kershaw opened a second location in 2015, Cheers Faneuil Hall.

This entry has been edited 43 times.