Hell Gate is a rough stretch of water on the East River that separates Astoria from Wards Island. The stretch of water received its name from the Dutch, who began settling New York in the 17th century. Over the years, Hell Gate has lived up to its name, sinking or damaging thousands of ships over the years. Finally, in 1885, tunnels were dug under Hell Gate and lined with explosives to blow a reef known as "Flood Rock," which helped ease passage through the water. The explosion was the largest man-made explosion before the atomic bomb was dropped on Hiroshima.

Picture of Explosion in 1885 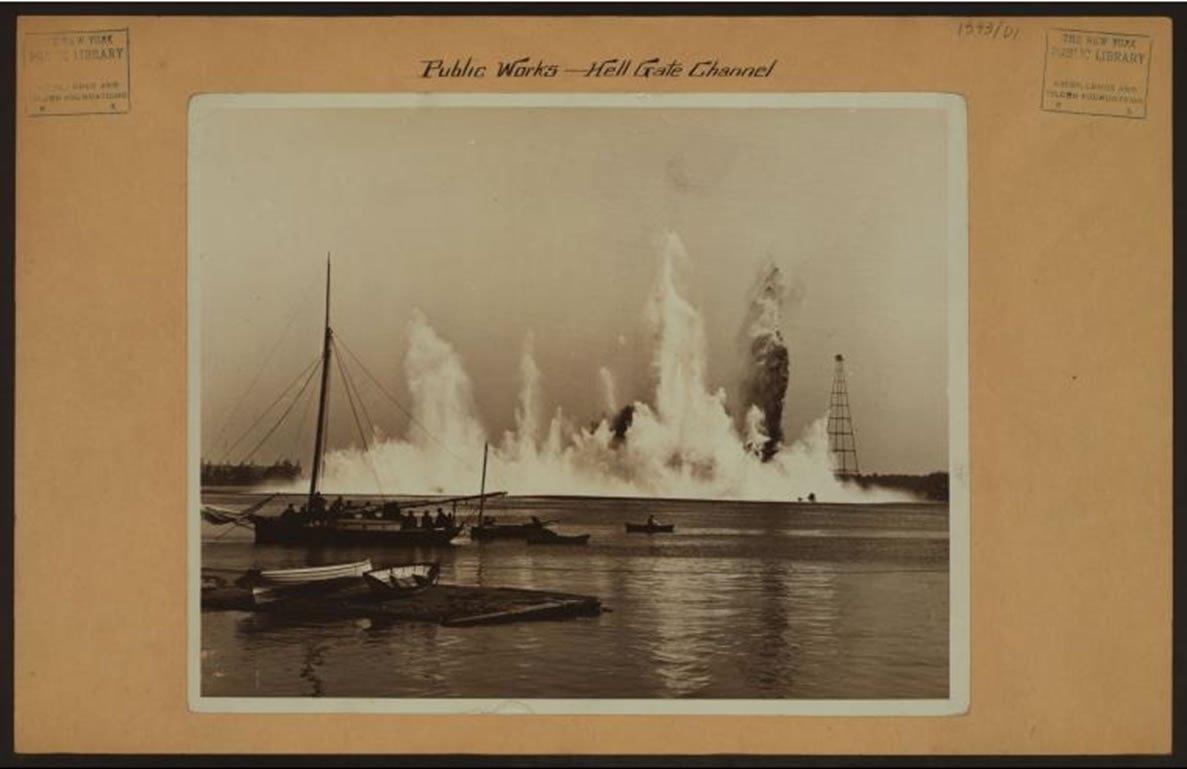 Located on the East River, Hell Gate is a stretch of tidal water that separates Queens from Ward's Island. The stretch of water received its name from the Dutch in the 17th Century. The original Dutch word "Hellgat" can be translated to mean "Open Passage," but over time, the name became Hell Gate, which better represented the turbulent waters. The passage was created by an underground fault and surrounded by boulders and reefs which made the stretch so dangerous.

Over the course of its history, the waters at Hell Gate sank or damaged thousands of ships traveling through the East River. One of the most famous stories of a ship sinking at Hell Gate comes from 1780 at the height of the American Revolution. At this time, the British had control of the East River and built batteries along the water to defend their position. However, a British frigate called the HMS Hussar sank at Hell Gate on November 25, 1780. The ship was carrying British soldiers and American prisoners of war. It was also carrying payroll for British soldiers at Newport. The money was never recovered.

Beginning in the middle of the 19th century, the United States government tried different methods to clear the waters at Hell Gate for safer passage. Finally, in 1885, the decision was made to explode 300,000 pounds of explosives that were drilled into tunnels that ran under the East River at Hell Gate. On the day of the detonation, over 100,000 people gathered to watch. The explosion sent 9-acres of Flood Rock and water into the air. This would be the largest man-made explosion until the Atomic Bomb was dropped during World War II. After the project was complete, the waters were finally navigable for ships.

"The Conquest of Hell Gate." US Army Corps of Engineers. Accessed Web, 10/19/17. http://www.nan.usace.army.mil/Portals/37/docs/history/hellgate.pdf.