Opening in 1923, The National Museum of the Air Force restores and displays historic aircraft, weapons, and engines from the earliest years of American military aviation to the present. The museum features hundreds of static displays and exhibits with each following a chronological order from the early years to World War II and The Cold War to the Vietnam Era and beyond. The museum also offers a wide variety of hands-on exhibits that include artifacts and photographs and highlight the contributions of individual Air Force personnel.

The "Grasshopper" is one of many aircraft on display. 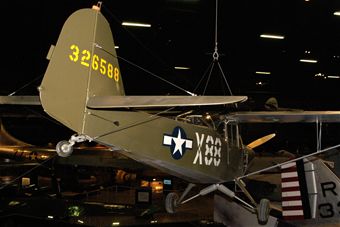 Aerial View of the museum

The National Museum of the Air Force was started in 1923 when the Engineering Division at Dayton's McCook Field began collecting artifacts for historical preservation. Following up in 1927, it established a location at Wright Field (later known as the Wright-Patterson Air Force Base) and that has been it’s home for the last few decades. It started out in a laboratory building before moving to a building owned by the Works Progress Administration in 1935 until World War II broke out. Following the war, the museum remained a private entity known as the Air Force Technical Museum.

In 1954, the Air Force Museum gained its first permanent home at the former Patterson Field in Fairborn in Building 89. Throughout the 1960s, American inventor Charles F. Kettering’s son, Eugene, worked on establishing and building a permanent structure for the museum to stay in. He became the first ever chairman of the Air Force Museum Foundation and led the construction project. However, he died before the building could fully finish and in 1969, his wife, Virginia, took leadership over the building. The facility housing the museum today finished in 1971 and opened right after. It returned to Wright Field and had triple the square space. It was also renamed the National Museum of the United State Air Force.

The Early Years Gallery displays the formative years of aviation. It takes visitors throughout the Wright Brothers’ inventions to the planes of World War I and the lead up to World War II. The National Museum of the U.S. Air Force holds one of the world’s best collections of World War II aircraft and missiles. The museum provides the depiction of pivotal moments of the U.S. Air Forces’ air power against both the Pacific and European powers. Just as with the previous galleries as a visitor you can travel back in time to see the major aircraft's that played an important role in our country.

The Presidential Years Gallery is home to the Boeing VC-137C, also known as SAM 26000. This aircraft is the Air Force One carrier that served on the day that President John F. Kennedy was assassinated. The Special Air Mission 26000 stands as the centerpiece of the Presidential Gallery, although guests can enter the presidential aircraft of President FDR, Harry Truman, and Dwight Eisenhower as well. This museum is the largest and oldest in the nation for military aviation.

"About the Museum." National Museum of the Air Force. Accessed July 21, 2015. https://www.nationalmuseum.af.mil/Home/About-Us.