The Klingle Valley Bridge, formally known as the Connecticut Avenue Bridge, is an art deco bridge in the Cleveland Park neighborhood of Washington, D.C. Constructed in 1931, the bridge replaced an 1891 streetcar viaduct and eased the pressures of increased transportation along Connecticut Avenue. The Klingle Valley bridge is 497 feet long with a 250-foot steel arch, and its decorative features are bronze and stone. The bridge rises 50 feet above the wooded Klingle Valley, where a new multiuse trail provides a local recreation spot and access to Rock Creek Park. The Klingle Valley Bridge represents an important era of city planning and suburbanization in Washington, D.C. and is a contributing property to the Cleveland Park Historic District. 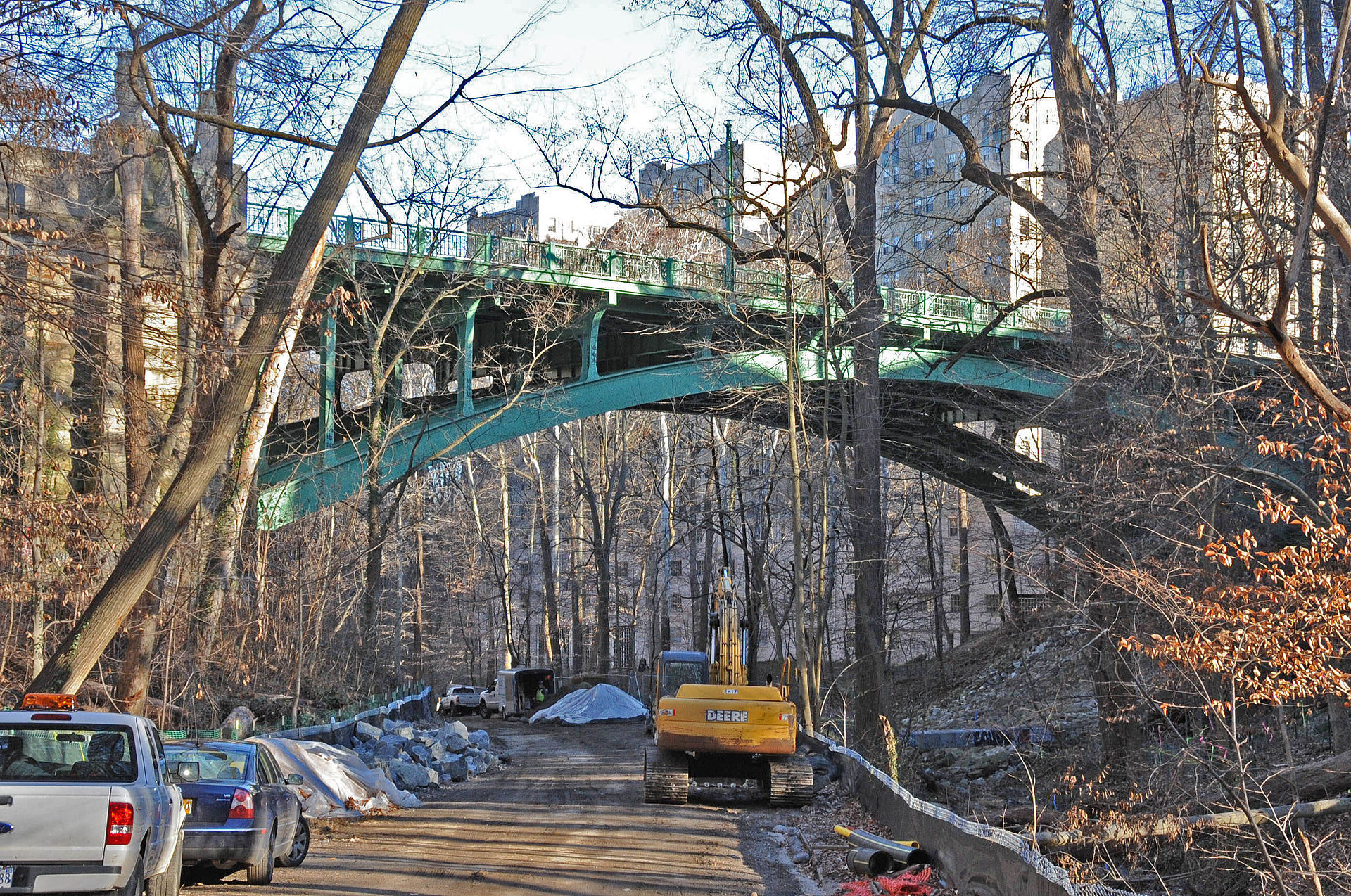 The bronze lanterns are the most distinctive elements of the bridge and were installed to be beautiful yet subtle. Photo by Carol M. Highsmith, Library of Congress. 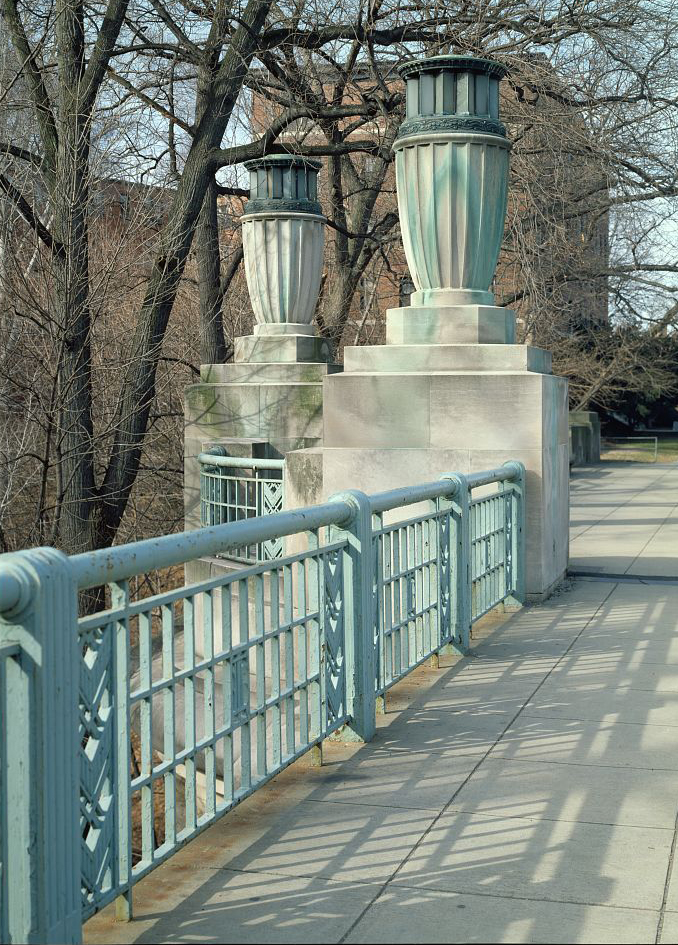 Every day, thousands cross the Klingle Valley Bridge on Connecticut Avenue, a main artery in Washington, D.C. Its bronze railings, large lanterns, and lampposts, turned bluish-green over time, frame the towering trees rising from the valley below. Built in 1931, the Klingle Valley Bridge is a manmade structure designed to complement nature as well as accommodate the growth of Washington, D.C. It embodies the careful urban planning that took place in the early twentieth century and shaped the Cleveland Park neighborhood as it is today.

Cleveland Park’s forested past is still evident in Klingle Valley and the large trees that line neighborhood streets. This area was once entirely forested and blended naturally with what is now Rock Creek Park. The first bridge in the Rock Creek area was built in 1788 near present-day M Street. At the time, the area was sparsely populated yet important for local industry and trade. It was not until after the Civil War that the city began to reach Rock Creek.

Washington, D.C.’s growth in the late nineteenth century ushered in an era of dedicated and necessary city planning. The federal government purchased 166 acres near Rock Creek to establish the National Zoological Park in 1889, and then made an even larger purchase of Rock Creek itself in 1890, preserving its natural beauty and making it available for public recreation. The city developed plan for highway and infrastructure development, which included a viaduct, completed in 1891, that carried a new line of streetcars to Chevy Chase. The streetcar line provided accessibility to outlying areas of Washington, D.C. and cultivated suburban development. The 1901 McMillan Senate Park Commission Report, which inspired the modern National Mall, and Commission of Fine Arts demonstrated D.C.’s commitment to well-planned and aesthetically-pleasing urban environments. All of these actions took Pierre L’Enfant’s original 1791 vision of Washington, D.C. into account.

Connecticut Avenue soon transformed into an important residential and commercial corridor, which would demand a new bridge. In the 1890s, beautifully-designed houses appeared in the new neighborhoods of Woodley Park and Cleveland Park, named for President Grover Cleveland, who summered in the area. By the 1920s, stylish residences, such as Tregaron Estate, Cathedral Mansions, and Kennedy-Warren Apartments, and a commercial district with attractive storefronts lined Connecticut Avenue. Soon, however, it was clear that Connecticut Avenue could not handle 30,000 vehicles driving across it each day, nor could the 1891 viaduct, which had been widened to accommodate cars and buses. City planners and local citizens had been discussing an upgraded bridge over Klingle Valley nearly since the viaduct was built. Their dreams were realized in 1930, when Congress appropriated funds for a new bridge. Thus began an impressive engineering and urban planning project.

The new Connecticut Avenue bridge would serve a number of important purposes. It would carry 20 tons, unlike the viaduct’s 6-ton capacity. It would be a major passageway for cars, trucks, buses, and streetcars, along with local pedestrians and tourists, from the suburbs to downtown. Additionally, the bridge would carry water lines, power lines, and telephone lines between the east and west sides of Rock Creek. Design proposals were subject to local planning commissions and the Commission of Fine Arts to ensure public buildings and structures appropriately reflected the nation’s capital. The new bridge was built in stages to ensure the daily flow of traffic over Connecticut Avenue would continue even with construction. Work was completed in January 1932, almost a month ahead of schedule and long before the spring tourist season.

Engineer Ralph Modjeski and architect Paul Phillipe Cret designed a practical yet visually appealing bridge. Their design was sophisticated and subtle, as to not detract from the beautiful wooded valley rising from either side of the bridge. They incorporated elements of art deco, a modernist artistic style that flourished in the 1920s. These elements are found in the railings' chevron patterns and eight lanterns upon stone pedestals. Bronzework has since oxidized and turned a bluish-green color. The masonry includes walls of Pennsylvania sandstone and benches, parapets, and lantern pedestals of Indiana limestone. The streetlamps were also used as trolley poles that supplied electricity to the streetcars. At the time, the 250-foot steel arch supporting the roadway was the longest in D.C.

The Klingle Valley Bridge retains much of its historical character. It withstood removal of the streetcars in the 1960s and construction of the Metro’s Red Line in the 1970s. In the late twentieth century, guardrails were added and light fixtures repaired or replaced. Furthermore, the National Park Service took over the Klingle Valley watershed and ensured the picturesque forest below the bridge would be preserved. Klingle Road remained an important thoroughfare until 1991, when it was destroyed by a flood and permanently closed. After decades of debate, Klingle Road reopened in 2017 not to automobile traffic, but foot traffic, as the Klingle Valley Trail. As traffic whisks by above, visitors in the valley can enjoy the peace of nature and a pathway to Rock Creek Park.