The remains of Cannon Memorial Hospital now sit here where the old Grace Hospital and Nursing school used to be. At its conception in 1908, Grace Hospital was only a five-room building, where the physician, Dr. Tate, both lived and treated sick residents of Banner Elk. The High Country's need for medical professionals contributed to the success of this hospital system: Grace Hospital and Nursing School was converted into Cannon Memorial Hospital in 1962, however the need for more beds outweighed the need for training nurses, so the nursing program was halted. The current regional hospital, Charles A. Cannon, Jr. Memorial Hospital, is a small, 25 bed building located in Linville, NC and still serves the region's healthcare needs.

Historic Photo of Grace Hospital Nursing School before it was converted to Cannon Memorial. 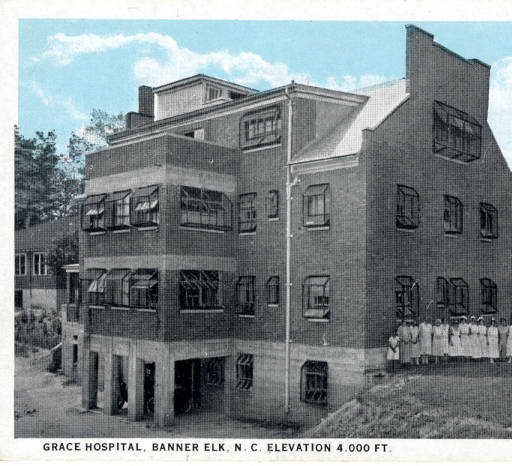 Banner Elk’s Grace Hospital began in 1908 as nothing more than a small building with five rooms: two patient rooms, a laboratory, an operating room, and a physician’s residence. Reverend Edgar Tufts, one of the founders of nearby Lees-McCrae College and a leader of the local Presbyterian Church, prayed for a physician to arrive in Banner Elk to “render the care and services of a Christian doctor” (Pollitt & Moore, 1992). It was Dr. Charles Reed who first arrived to answer Tufts’ prayers, though he was replaced by Dr. William Cummings Tate 2 years later, in 1910. Dr. Tate and his wife both lived in the hospital, where in the early 20th century, only the most urgent cases were treated; most patients at this time were visited at their homes, even if that meant just one physician to care for an entire township without paved roads.

By 1923, the humble Grace Hospital was averaging five patients a night and was in dire need of expansion. A close friend of Dr. Tate's, Mrs. Helen Hartley Jenkins, heard of his exhaustive work in Banner Elk and subsequently donated $22,000 to build a twenty-five-bed hospital. Construction of the new building was soon after completed; the building was complete with running water, electricity (however faulty), and a coal-fired furnace. Mary Chappel, one of the first nurses to work at Grace, recalls administering anesthesia while “Granny” Bradley, who lived next door, held “a flashlight to supplement or supply the light by which the doctors operated” (Pollitt & Moore, 1992).

A second physician, Dr. Rhonda Hardin, arrived in Banner Elk in 1925 to help manage Grace’s rapid success. By 1932, the hospital accepted its first “class” of nursing students - official nursing training began in 1924, however it was only provided to individuals. The hospital’s success continued until, in 1949, there were not enough physicians to keep training and the nursing school moved. Grace, as a patient care facility, continued to grow and was eventually replaced by Charles A. Cannon, Jr. Memorial Hospital in 1962.