Dedicated in 2017, this marker commemorates the life of professor and principal Charles William Warfield Sr. Born in Harper’s Ferry in 1870, Warfield devoted his life to training Black teachers and educating Black children in this West Virginia. Warfield served as a professor of English at Storer College and Bluefield State College until 1917, when he became a principal of a new African American school in Buckhannon. At the dedication ceremony, Buckhannon mayor David McCauley indicated that there was no educational opportunity for African Americans in the city prior to Warfield's arrival. Records of Black education in West Virginia challenge this statement, as Black children were able to attend area schools that were established in area communities such as Weston that date back to the early years of Reconstruction. Carter Woodson's research indicates that E. L. Morton was the principal of a school for African Americans over a decade prior to Warfield's arrival. Although the mayor's statement claiming that there were no schools for African Americans prior to 1917 is inaccurate, he is correct to credit Warfield and other teachers who created better opportunities for Black children and families in Buckhannon.

This plaque was dedicated in 2017 during West Virginia Wesleyan's homecoming weekend. 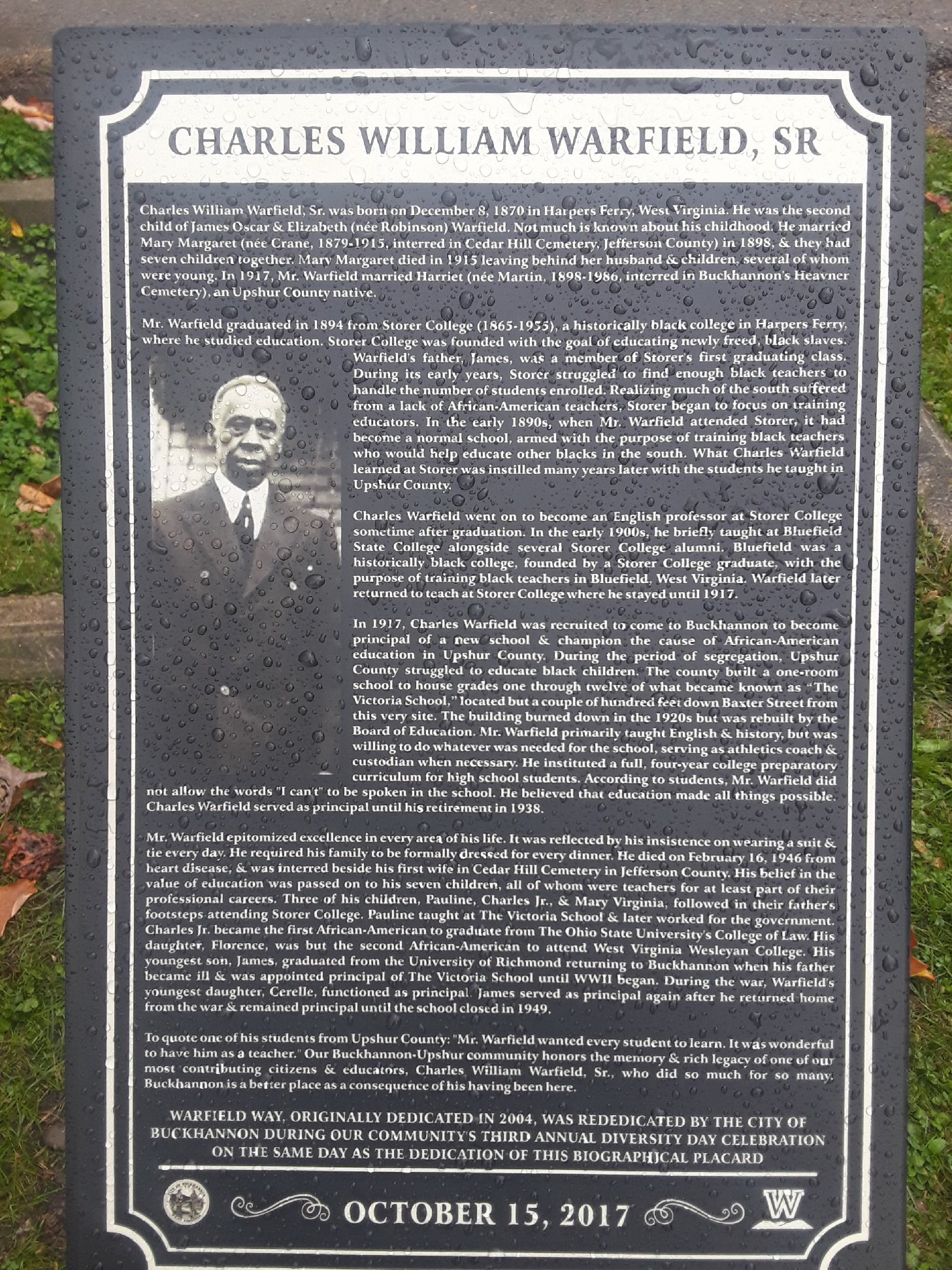 In addition to the plaque, a street near West Virginia Wesleyan was named in Warfield's honor. 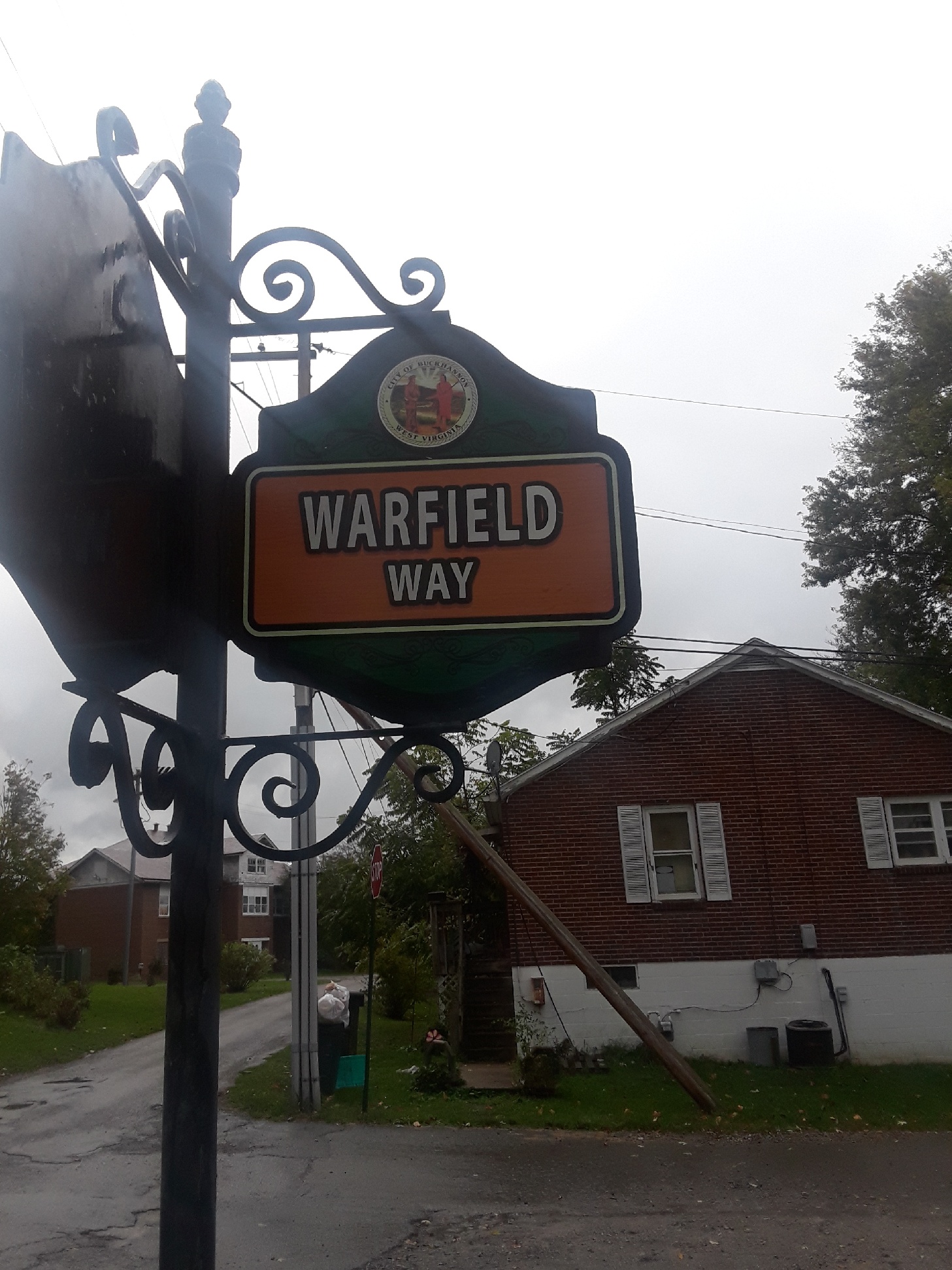 Charles William Warfield, Sr was a scholar, professor, and school principal with a determination to educate and uplift the African-American community through education.  Born in Harpers Ferry in 1870, Mr. Warfield devoted his life to training Black teachers and educating Black children.  Mr. Warfield served as a professor of English at Storer College and Bluefield State College.  In 1917, Mr. Warfield left Storer College and became the principal of a new African-American school in Buckhannon.  In his time in Buckhannon, he passionately championed the cause of African-American education.  According to Buckhannon mayor David McCauley, Charles William Warfield Sr, “was the first Black principal of our first Black school (in Buckhannon).  We basically didn’t have Black education prior to his arrival in 1917.”

Over the past three years, Buckhannon mayor David McCauley and the town leadership have made a concerted effort to honor the lives and legacies of prominent African-Americans who lived in Buckhannon  On the third annual Diversity Appreciation Day on October 15, the town unveiled an historic marker and dedicated a street, “Warfield Way” in the heart of a former African-American neighborhood.  Beside the “Warfield Way” street sign is a marker that details Charles William Warfield Sr.’s accomplishments and contributions to the town of Buckhannon.  In an interview with WDTV 5, Mayor McCauley explains that Buckhannon is, “Engaging in some atonement for the past and recognizing the many wonderful benefits that (African- Americans) brought to our community.”  Another prominent African-American honored on a previous Diversity Appreciation Day was Arnett W. “Ace” Mumford, a notable Southern football coach born in Buckhannon.  This memorial to Charles William Warfield Sr. is part of a town wide initiative to acknowledge and appreciate diversity.

At the dedication of “Warfield Way,” one of his descendants, Charles WIlliam Warfield III, noted that Charles William Warfield Sr. was known for expecting the best from everyone.  Mr. Warfield Sr. insisted that his family dress in formal attire for every meal, that children contribute to the adult conversations at the dinner table, and that they always use proper grammar.  According to Mr. Warfield III, his grandfather’s insistence on excellence helped make it possible for his posterity to succeed.  One of Mr. Warfield Sr.’s sons became the first African-American to graduate from the Ohio State University’s College of Law, and all of his descendants served as educators for at least part of their professional careers.