Smith Memorial Arch was dedicated to Union veterans from Pennsylvanians who fought and lost their lives in the American Civil War. The statue is located at the site of the 1876 Centennial Explosion and serves at the entrance to the West Fairmount Park. Richard Smith funded the building of the memorial in 1891; however, the arch was not completed until 1912. 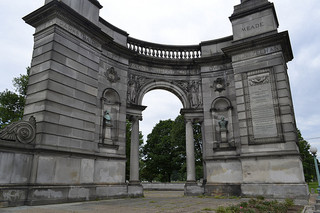