The Sedgwick Monument located in West Point, New York on the campus of the United States Military Academy, is a memorial for Union General, John Sedgwick. Sedgwick was a Union General who lost his life in the Battle of Spotsylvania Court House in 1864 during the American Civil War. The statue was sculpted by Launt Thompson and dedicated to the campus in 1868. 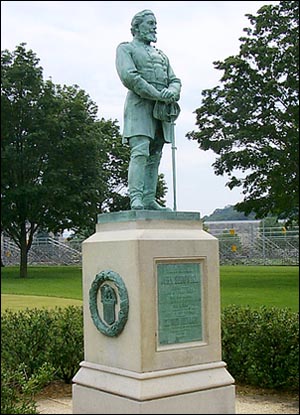 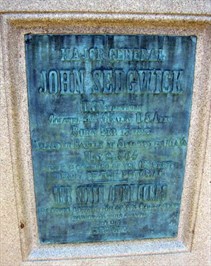 Union General, John Sedgwick was born in Cornwall, Connecticut. He was named after his grandfather who served as an American Revolutionary War general under George Washington. Sedgwick attended the United States Military Academy, graduating in 1837. In addition to serving in the American Civil War, Sedgwick also fought in the Seminole Wars, the Mexican-American War, the Utah War, and the Indian Wars.

During his time serving as a Major General during the American Civil War, Sedgwick fought in many well-known battles such as the Peninsula Campaign, Yorktown, Seven Pines, the Battle of Glendale, and the Battle of Antietam. It wasn’t until May 9, 1864 when Sedgwick lost his life in the Battle of Spotsylvania Court House after being shot by a sharpshooter. John Sedgwick was the highest-ranking causality for the Union during the Civil War.