Big Hole National Battlefield located in Wisdom Montana is the site of the Battle of Big Hole where the Nez Perce Indians fought against U.S. Cavalry forces on August 9, 1877. This particular battle was the largest fought between the Nez Perce and the United States Government during the Nez Perce War. The park became part of the Nez Perce Historical National Park in 1992. The park sits on 1,010 acres just outside of Wisdom, Montana. The visitor’s center is open year-round. 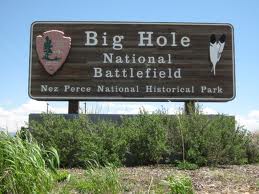 Six weeks later, U.S. forces planned their attack on the Nez Perce. The attack took place before dawn on August 9, 1877 on an estimated 800 men, women, and children of the Nez Perce as they camped at Big Hole. The Nez Perce were able to resist, allowing many to escape the violence. However, lives were still lost. 89 Indians were killed (mostly women and children), while U.S. forces suffered casualties as well, around 28 deaths and around 40 injured. The Nez Perce were defeated two months later during the Battle of the Bear Paw Mountains, bringing an end to their flee to Canada.