The large, red home which is now situated next to the famous House of the Seven Gables in Salem, Massachusetts was the birthplace of acclaimed author, Nathaniel Hawthorne. Hawthorne was born in the home but he only lived there for a short time. The home itself was moved from Union Street to its current spot on Derby Street in the mid-twentieth century. Hawthorne is best known for his classic works of American literature: The Scarlet Letter and The House of the Seven Gables. 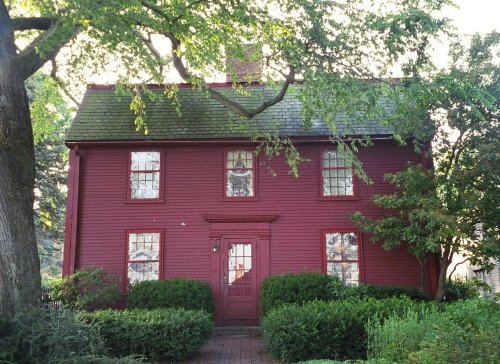 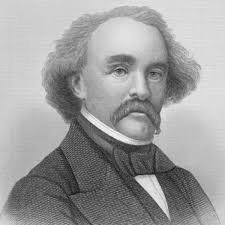 Nathaniel Hawthorne’s Birthplace is currently located adjacent to the famed House of the Seven Gables on Derby Street in Salem, Massachusetts.  The home was originally built between 1730 and 1745 and set on Union Street, about 0.3 miles away from where it is now. It was moved after it was purchased by the House of the Seven Gables Settlement Association in 1958. The house itself is a modest example of the Georgian-style architecture that was fashionable during the eighteenth century.  The Georgian style was popular due to its “symmetrical design, classical proportions, and decorative elements.”[1]

The building’s architecture is impressive; however, the home is more well-known for being the birthplace of one of the nation’s most adored writers. Nathaniel Hawthorne, acclaimed author of such classics as The Scarlet Letter and The House of the Seven Gables, was born on the property on July 4, 1804. He was the son of Nathaniel and Elizabeth (Manning) Hathorne. Nathaniel added the “w” to his last name when he was an adult. When he was only four years old, his father died of yellow fever at sea. Soon after, he and his mother and two sisters (Elizabeth and Maria Louisa) moved from Union Street to Herbert Street to live with Nathaniel’s mother’s family.

When he was nine years old, Nathaniel severely injured his leg and was unable to leave his new home for nearly two years. It was during this time of confinement that he developed his love for reading and writing. He left Salem for about a year (he was about 14 years old) when his family moved to southcentral Maine. He returned and was admitted to Bowdoin College in 1821. He attended Bowdoin until his graduation in 1825 and then he returned to Salem.  While back in Salem, Hawthorne frequently visited his cousin, Susanna Ingersoll.  She lived in the renowned House of the Seven Gables, or the Turner-Ingersoll Mansion.  Her home was the inspiration for the novel of the same name.

Hawthorne published his first novel in 1828, titled Fanshawe. He later recalled the work and burned any copy of it that he could find. His next work, a collection of short stories called Twice Told Tales, wasn’t published until 10 years later. While Hawthorne was writing, he took on several odd jobs and eventually was appointed the “weigher and gauger” at the Boston Custom House. By 1846, he was appointed surveyor for the Town of Salem. He started work on The Scarlet Letter and published it in 1850.

Nathaniel Hawthorne had married Sophia Peabody (a painter) in July 1842 after a five-year courtship. They had two daughters, Una (1844) and Rose (1851) and one son, Julian (1846). By the time that their final child was born, Hawthorne was seeing success in his literary career. In 1852, after struggling financially for several years, he was finally able to purchase a home for his family - the Alcotts’ house in Concord which he renamed “The Wayside.”

Franklin Pierce won the presidential election in 1852. He was a good friend of Hawthorne’s from their days at Bowdoin College, and Hawthorne helped his campaign by writing a biography of his good friend. As a reward for his help, Pierce appointed Hawthorne as the American Consul to England. Hawthorne moved his family to Liverpool for the next four years. He lost his appointment when Franklin Pierce’s term was over. In 1856, the family returned to the Wayside in Concord. He continued to write, but not with the same success as his earlier literary masterpieces. He died on May 19, 1864 and is buried at Sleepy Hollow Cemetery in Concord, Massachusetts. In 1958, the home that he was born in was purchased by the House of the Seven Gables Settlement Association, moved to the its current site under the guidance of noted historian and conservationist Abbott Lowell Cummings, and opened for tours.

Hours vary seasonally. The home is typically open daily, with the exception of a few days during the winter months and holidays. Check website (below) for more information.