Jared Sheldon was one of the earliest settlers in the Sacramento area, arriving in perhaps 1839, the same year as John Sutter. In 1846, Sheldon built the second grist mill in the Sacramento Valley in Sloughhouse in 1846 on land granted to him by the Mexican government. Sheldon and two of his friends were murdered in 1851 in a dispute over a dam Sheldon built on his property. 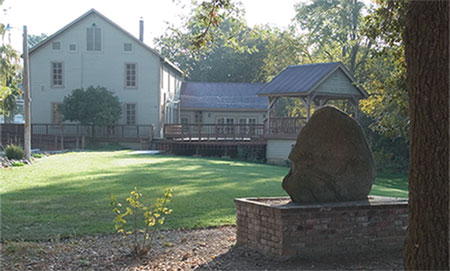 Another employee at Sutter’s Fort, William Daylor, became fast friends with Sheldon and in 1841, Daylor told Sheldon about the beautiful Cosumnes River Valley he’d discovered while looking for some stray horses.  In 1843, Sheldon was given a large portion of the land in a grant from the Mexican government as payment for his work on the customhouse, and he divided it with Daylor.  Sheldon kept the area around what is now known as Sloughhouse.

Between 1846 and 1847, Sheldon built a grist mill on the site. It was the second grist mill in the area, the first being John Sutter’s.  When gold was discovered in the area, both Sheldon and Daylor prospered, and reportedly found $17,000 in gold nearby.

But the gold rush was a mixed blessing for Sheldon. Sheldon built a dam on the Cosumnes River to supply water for his crops. The dam’s construction and the occasional flooding of plains farther along the river angered local miners, and eventually Sheldon reached an agreement with them that he would close the sluice and cause them flooding only on certain days.

In 1851, the miners reneged on the agreement and destroyed the dam, then attacked Sheldon and some of his friends. Sheldon was shot and taken to a nearby cabin, where he died. The cabin reportedly stood for decades after the attack, with Sheldon’s bloodstains on the floor. His friends, Edward Cody and James Johnson, were also killed by the miners. The three men were buried at the Sloughhouse Pioneer Cemetery. A marker was placed at the site of the shooting in 2008.