The Boston Tea Party and Ships Museum includes virtual exhibits, replica life size ships, and traditional exhibits about the history of the Boston Tea Party on December 16, 1773. The museum offers an extremely unique experience for visitors as it includes actors who play the role of eighteenth century colonists who take visitors to explore the ships. They also see where in the harbor tea crates were dumped into and visit Abigail’s Tea Room. The museum includes replicas of all 3 ships that sailed from London carrying British East India Company Tea to Boston in 1773: the Beaver, Dartmouth, and Eleanor, all of which were American built and owned. 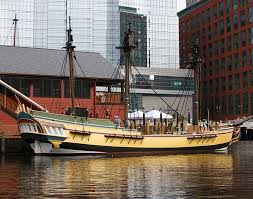 The event of the Boston Tea Party was a very crucial event which kickstarted the Sons of Liberty’s pursuit to help America declare independence from British control. This was a protest against the Tea Act of 1773 which allowed the British East India Company to sell tea from China to the colonies without the need of paying taxes. However, the protest did not have concern about the high taxes, but rather “no taxation without representation” along with the concern of Parliament’s control over the colonies without them having a voice in the matter. Samuel Adams and others in his group began boarding all three vessels that were transporting tea in which they toss every crate overboard over the course of three hours. The men committed property damage up to about 92,000 pounds of money, according to the British East India Company.

Parliament quickly took action against the colonies for this heinous act and passed the Intolerable Acts. These pieces of legislation were for the main purpose of making Boston pay for destruction of private property. They also allowed British to retake control of Boston and reorganized colonial government in the colonies. The Boston Tea Party is etched into history as one of the events that led to the war of the American Revolution in the fight for independence. It is remembered through this museum.

Visitors can embark on one of the most entertaining and interactive museum experiences. They can meet actors portraying the colonists. Visitors can explore the three ships and dump tea overboard just as the Sons of Liberty did on that fateful night of December 16, 1773. Tourists can read the love letters that John and Abagail Adams wrote to each other in the archives. The museum’s website even has their own blog where they post opinion columns and hypothetical stories involving tea.