The Enzian Theater is a local theater house that has a long history of playing independent films and providing the back drop for the Florida Film Festive. Through the years the theater has been run by a local by the name of Tina Tiedtke who started the movie house in 1985. This unique movie theater is a one and only full time not for profit theater in Central Florida. With it's popularity they have limited seating and every showing is sold out regardless of new or old releases. As a nationally recognized theater for it's popularity and it's film festivals you can come for a night of movie entertainment just as the Oscar award producers and celebrities have come. The Enzian Theater is a must see.

Enzian's front entrance and ticket booth counter has a nostalgic feel and look. 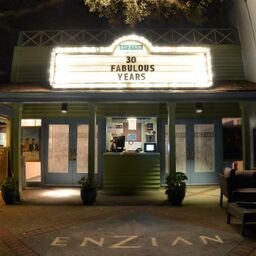 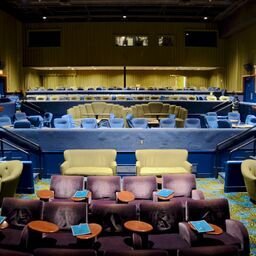 Eden bar nestled under the moss draped trees will provide a nice lunch or dinner with a perfect ending of a movie. 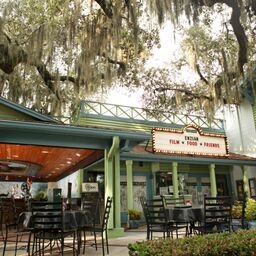 One of the beautiful aspects of the Enzian theater and Eden bar is the landscape of decades old moss draped trees. These trees shade the patio and lawn where you can lounge before or after a meal if you a waiting for a movie, or just want to relax. 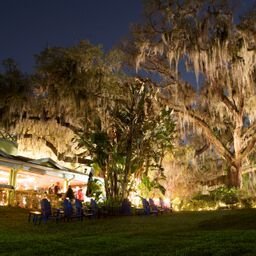 As nostalgic cinema houses operated for many years, the Enzian has maintained its landscape to preserve this look as patrons enjoy the monthly out door lawn movies shown for free during the warm Florida summer months. 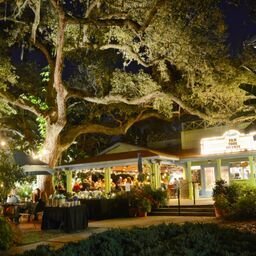 Bring your favorite lawn chair, a warm blanket, and the entire family for a free night out to watch a movie on the Enzian lawn. There is NO charge unless you want to order dinner at the Eden bar or just have to have that soda and movie popcorn. 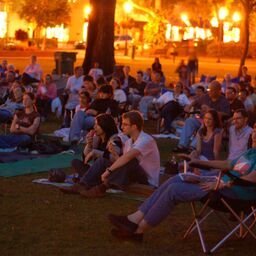 The Enzian theater is located in Maitland Florida at 1300 S Orlando Avenue and only 10 minutes north of Orlando, Maitland has been primarily known as a suburban area. Nevertheless, Maitland will soon have a distinctive downtown area, with the Enzian Theater as one of the landmark places of interest. The Enzian is a house cinema that is home to the Oscar accredited Florida Film Festival. This film festival is only one of the few selected for Oscar qualifying festivals in short film production categories. The festival is on its 27th year premiering over 20 different movies from independent production to international films released in the United States.  This local iconic house cinema may not be a historical landmark in the traditional sense of the definition, but to the local residences it is a place to visit with local historic value.

The Enzian theater is a small art house with a distinctive ambiance nestled off Orlando Avenue beneath the majestic weeping oak trees. This art house has the characteristic look of an old house cinema, including the southern charm of outdoor lounging areas. You will quickly get the sense of being in old Florida as you walk down the small sidewalk where lawn seating under the trees greet you to come and sit. The theaters vintage style marquee lights up the movie of the day, and from a curb side view you would not know this is a theater. There is such a nostalgic feeling you won’t be able to deny the desire to sit and relax among the trees. There is so much to enjoy that the Enzian has to offer.

The theater opened up its doors in 1985, by Founder Tina Tiedtke and her father John considered to be Central Florida's arts dynasty who were the driving force making notable contribution to the arts locally, including the Rollins College Music and Theater Departments. When Tina wanted to provide an art house for the community, John combed the area for an appropriate venue. With nothing available, they bought a small wooded piece of property in Maitland and built the first local art theater.

Maitland is one of the oldest incorporated suburban towns in central Florida. The area originally was inhabited by Native Americans, and named after Fort Maitland built in 1838 on the western shore of Lake Fumecheliga (later Lake Maitland) during the Second Seminole War. After the war the fort was torn down, and the area remained rural for 30 more years, until a post office was constructed for settlers in the area. This settlement came to be called Lake Maitland, and later just Maitland.

During the mid-1980’s Florida was still evolving into a tourist destination but in the 1990’s Orlando experienced an advantage in film production with year-round sunshine and good filming locations. Along with the construction of the Disney-MGM Studios and Universal Studios production facilities located in Orlando. This would quickly attract many recognizable names in film making to the area like Ron Howard, Steven Spielberg, and Tom Hank's. Central Florida was then given the nickname of “Hollywood East" because of its surging film industry. As Marketing manager Valerie Cisneros points out in the fall of 2017 “Enzian will have showed “Loving Vincent” a film which they have been working on for years about Vincent van Gogh’s life, it was shot live action, and then they took all 65,000 frames and hired over 125 artists from around the world to paint over the frames van Gogh style in oil paints. It’s the first fully oil painted feature film, and this film has attracted people from all over Florida and even Georgia”. This film was undeniably, a technical achievement visually, and conceptually it’s jaw-dropping considering the effort that went into the production.

With three decades of showing films at the Enzian it is now necessary for the theater to expand from only one large screen, to three screens in order to provide the for the necessary growth. The theater is fully booked and they have no room for additional film openings that may come out. So, the expansion is a priority, but with funding and local zoning the Enzian has been on a slow move to broaden the theaters growth. Nonetheless, the focus and significance of the theater is a simple one, Valerie Cisneros said the Enzian wants their art house to be the theater that can “educate, inspire, entertain and connect the community through film”.

The Box Office opens at daily at 1:00 PM and remains open until 15 minutes after the last show of the day starts. In general, the Box Office is open 1-9:00PM daily.