At this location on May 20, 1961, a racially integrated group of young civil rights activists calling themselves the Freedom Riders faced violent attacks outside this former bus station. Martin Luther King Jr. and many other civil rights leaders came to Montgomery to support the students and the Freedom Ride continued from this bus station on May 24th as the activists boarded a bus bound for Jackson where they would face more violence but also draw the nation's attention to the injustice of segregation and depth of racism. While these young people were forced to stop their demonstration, hundreds more continued the Freedom Rides throughout the South. When the Freedom Riders arrived at the Montgomery Bus Station, an angry mob violently attacked them, with white member Jim Zwerg receiving the most injuries. As the Freedom Riders continued their journey, just outside of Anniston Alabama, one of the buses was firebombed and an angry mob attacked those who tried to flee. Passengers on the second bus were beaten nearly to death in Birmingham Alabama. The Freedom Riders were held hostage by Bull Conner, Birmingham's Public Safety Commissioner, and could not leave the city for five days. Today, the Montgomery Greyhound Bus Station is a powerful symbol of the civil rights movement and the courage of nonviolent civil rights activists who used interstate buses to travel to segregated cities in the South and advocate an end to segregation in public transportation. The Montgomery Bus Station was closed in 1995; there is currently a museum inside the old station.

The station itself was constructed in 1950 and officially opened in 1951. The building is now a museum dedicated to the Freedom Riders. 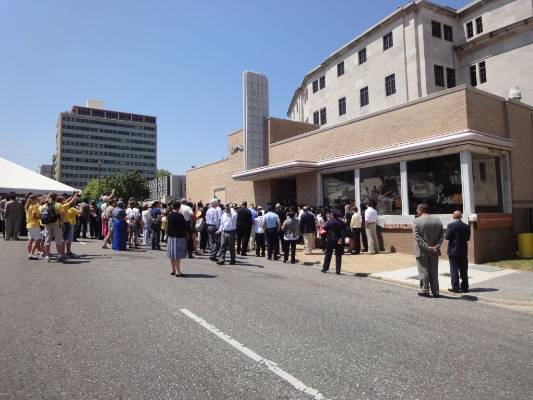 The Greyhound Bus Station is a small, single-story building constructed in between 1950 and 1951 in Montgomery, Alabama. The station contains elements of Modern style which includes horizontal emphasis, asymmetry, and windows that wrap around the corners. It underwent several alterations since the original construction. It is still recognized as a mid-20th-century bus station.

Throughout the 18th and 19th centuries, many states legally segregated facilities, schools, and public transportation for Black and white Americans. On May 20th, 1961, a group of integrated 21-year-old college students from Nashville arrived at the bus station. Calling themselves the Freedom Riders, they traveled to deeply segregated parts of the South on an interstate bus to bring an end to racial discrimination and segregation. When they disembarked in Montgomery, a mob attacked the Freedom Riders. Future United States Representative John Lewis, then the student leader of the Freedom Riders, shouted at the mob that attacked them. He said, “Stand together. Don’t run. Stand together!” Several of the students jumped over a wall and ran into a federal building next door. Lewis, William Barbee, and Jim Zwerg were trapped at the bus station and beaten unconscious. Zwerg was a white man who received most of the violent attacks. The Freedom Riders had seven female members. They managed to find a Black taxi owner who would take only the five Black female members. John Seigenthaler, a federal representative, attempted to rescue the other two stranded white women; however, the rioter knocked him unconscious with a metal pipe

The property is no longer used as a bus station and closed in 1995; however, it was saved from demolition and restored. In 1996, it was labeled as a historic landmark. In 2011, a museum was opened inside of the old bus station. It is listed on the National Register of Historic Places. In 2011, the museum won a national preservation award from the National Trust for Historic Preservation.