The Prewitt Slave Cemetery is the final resting place of approximately 300-500 slaves and may well be the largest existing slave cemetery in Alabama. The cemetery was established in 1820s by John Welsh Prewitt, a plantation owner and slave trader, who owned more than 600 slaves. The last burial in the two-acre cemetery took place in 1945. Markers date as far back as 1819 and range from hand-cut river rock with crude etchings to solid slabs of arched stone, footstones and flat rocks with refined text. As the cemetery is on private land, it is not clear if the public is able to access the site as of 2017.

Prewitt Slave Cemetery as it appeared in 2006. 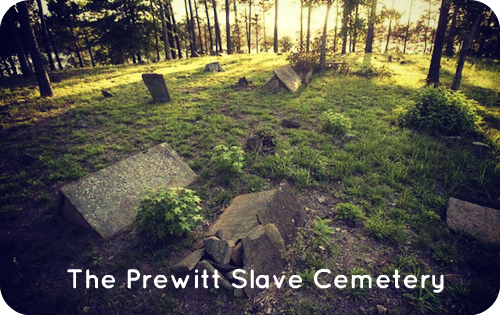 The site suffered from years of neglect and became overgrown. It gained renewed attention in the early 1990s when Eloise Prewitt, a descendant of John Welsh Prewitt, began a genealogical search that led to the rediscovery of both the Prewitt family cemetery and the Prewitt Slave Cemetery. Restoration efforts of both cemeteries were commenced shortly after the discovery of the slave cemetery in 1998. It appears that public access to the site, by way of the Old Byler Road, stopped in 2009.