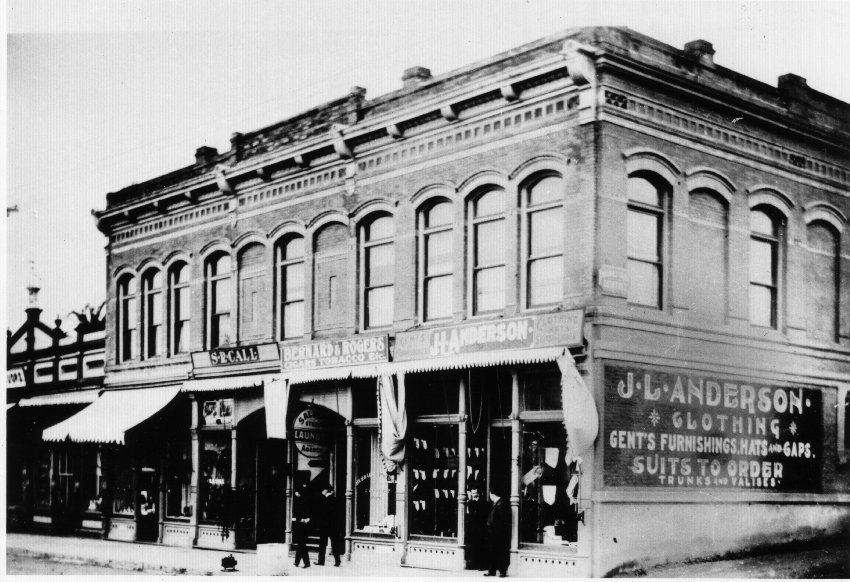 This simple rectangular commercial building is constructed of brick, but finished in smooth plaster. Its main entrance is facing Monterey Street, but has a side entrance on Morro Street to access the upper floors. The architecture could be described as a form of Classical Revival, with very little ornamentation. The façade has endured several renovations over the years, but currently exhibits the character quite similar to that when originally constructed.

After Silas Call died in 1880, his widow became involved in real estate. Before she had the new building constructed, the corner of Monterey and Morro was occupied by “rattle trap buildings.”

One of the first tenants of the new “elegant brick building” was the Pacific Land Company, “one of the neatest and best furnished real estate offices in the state.” The company was responsible for subdividing part of Rancho El Chorro and the Baker Ranch on San Marcos Creek near Adelaida.

Another tenant was the Call’s older son Silas Reuben, who continued his father’s trade of harness-maker. Jeff Anderson had a clothing store in the downstairs corner space. He sold that business so that he could build the Anderson Hotel across the street (after our photo was taken).

Other occupants over the years were: salons, jewelry stores, gift shops, professional offices, the Sno-White Creamery and the Pacific Gas and Electric Company.

Mrs. Call had a variety of real estate interests. In June 1895, she was fined $75 for knowingly allowing one of her rentals to be used as a house of prostitution.