Bears Ears National Monument is a 201,876 acre area in southeast Utah. It was established as a 1.35 million acre national monument on December 28th, 2016 by President Barack Obama through the 1906 Antiquities Act, which gives the president the ability to declare endangered federal lands as national monuments. The monument was established to protect over 100,000 cultural and archaeological sites significant to the Ute Mountain Ute Tribe, Navajo Nation, Ute Indian Tribe of the Uintah Ouray, Hopi Nation, and Zuni Tribe. The land is managed by the Bureau of Land Management which is informed by the Bears Ears Commission and the National Forest Service. In December 2017, President Donald Trump reduced Bears Ears by 85%, an action condemned by Native Tribes, archaeologists, and conservation groups.

US Forest Service - This picture is the boundary for the national monument and also demonstrates which agencies manage which parts of the monument. (2016) 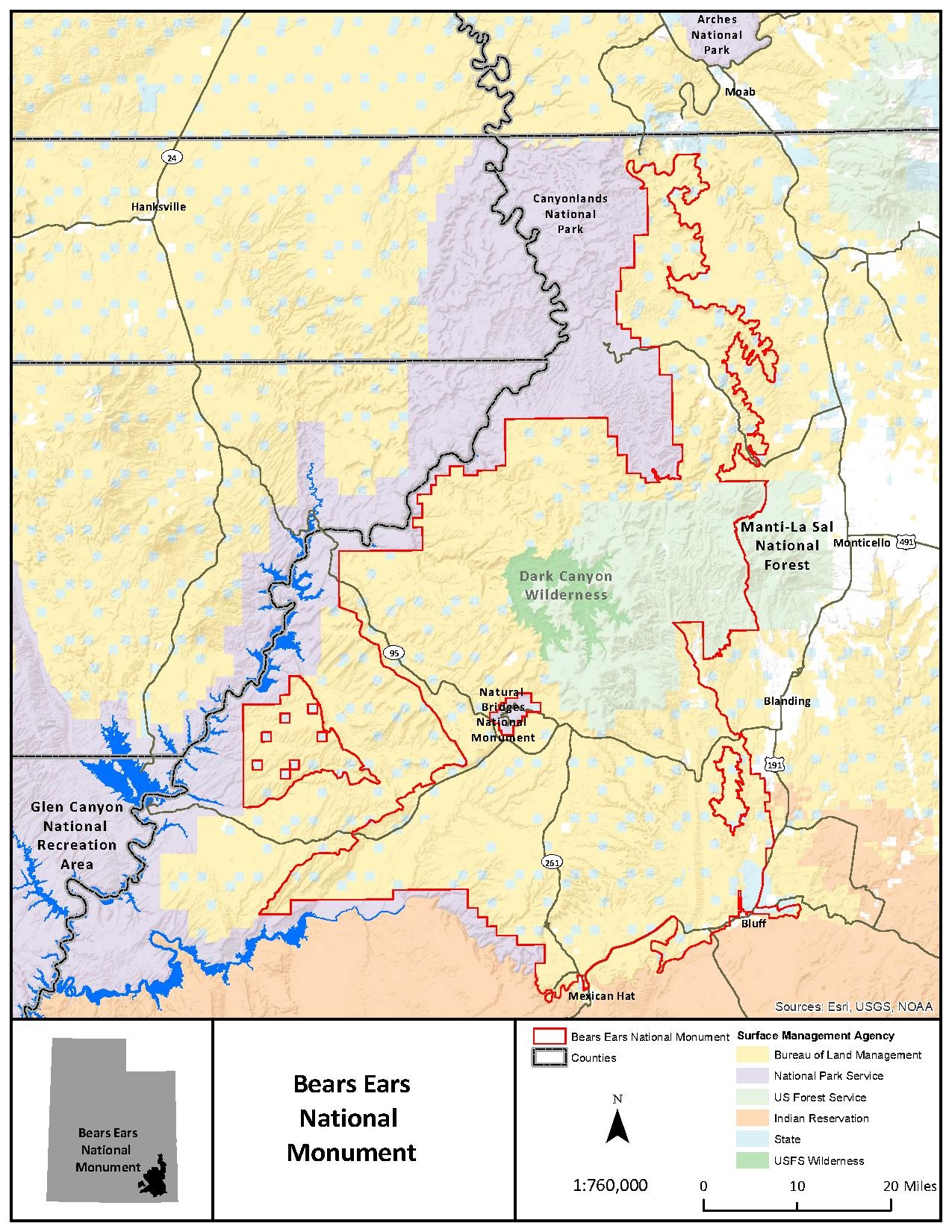 Indian Creek Canyon and the Sixshooter Peaks - US Bureau of Land Management. This picture shows the buttes after which the monument is named. (2016)

Sunset in Indian Creek - US Bureau of Land Management (2016) 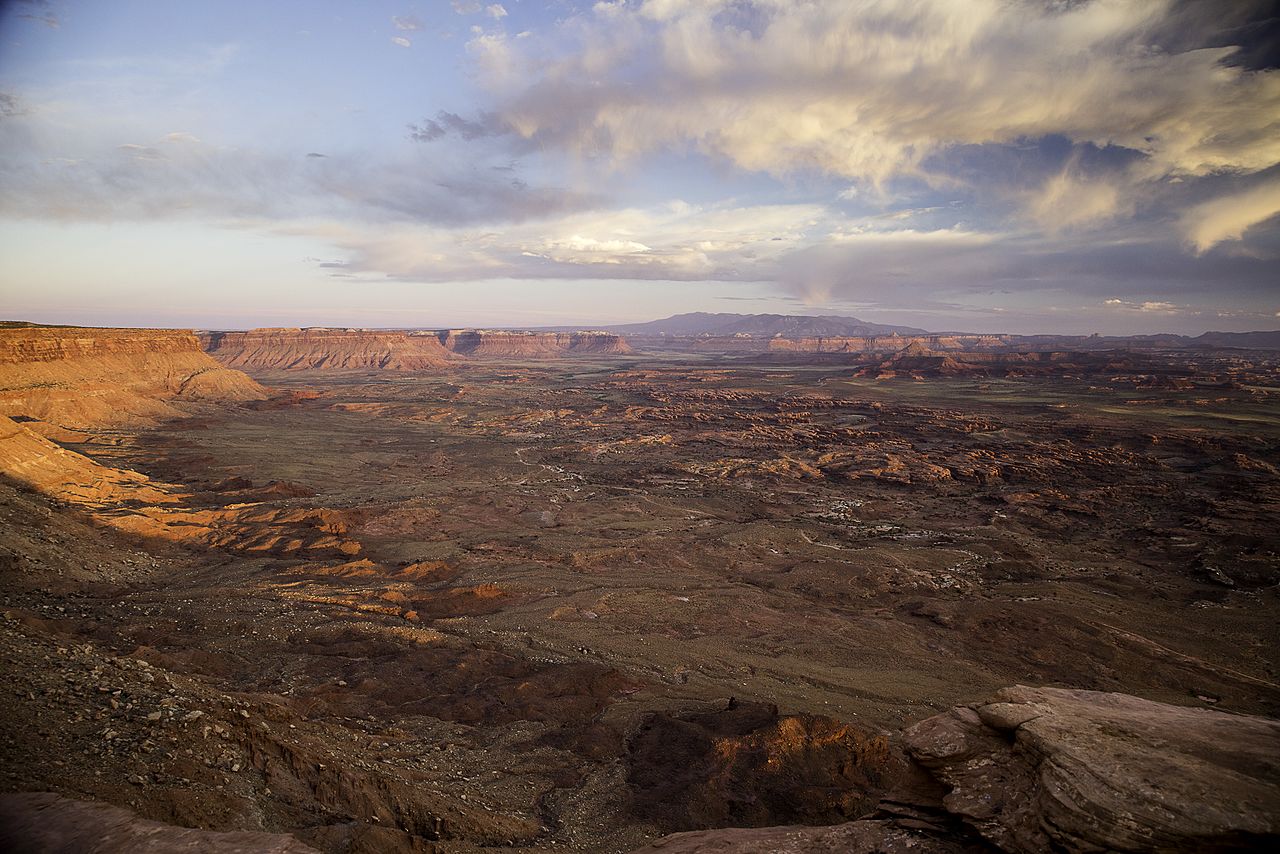 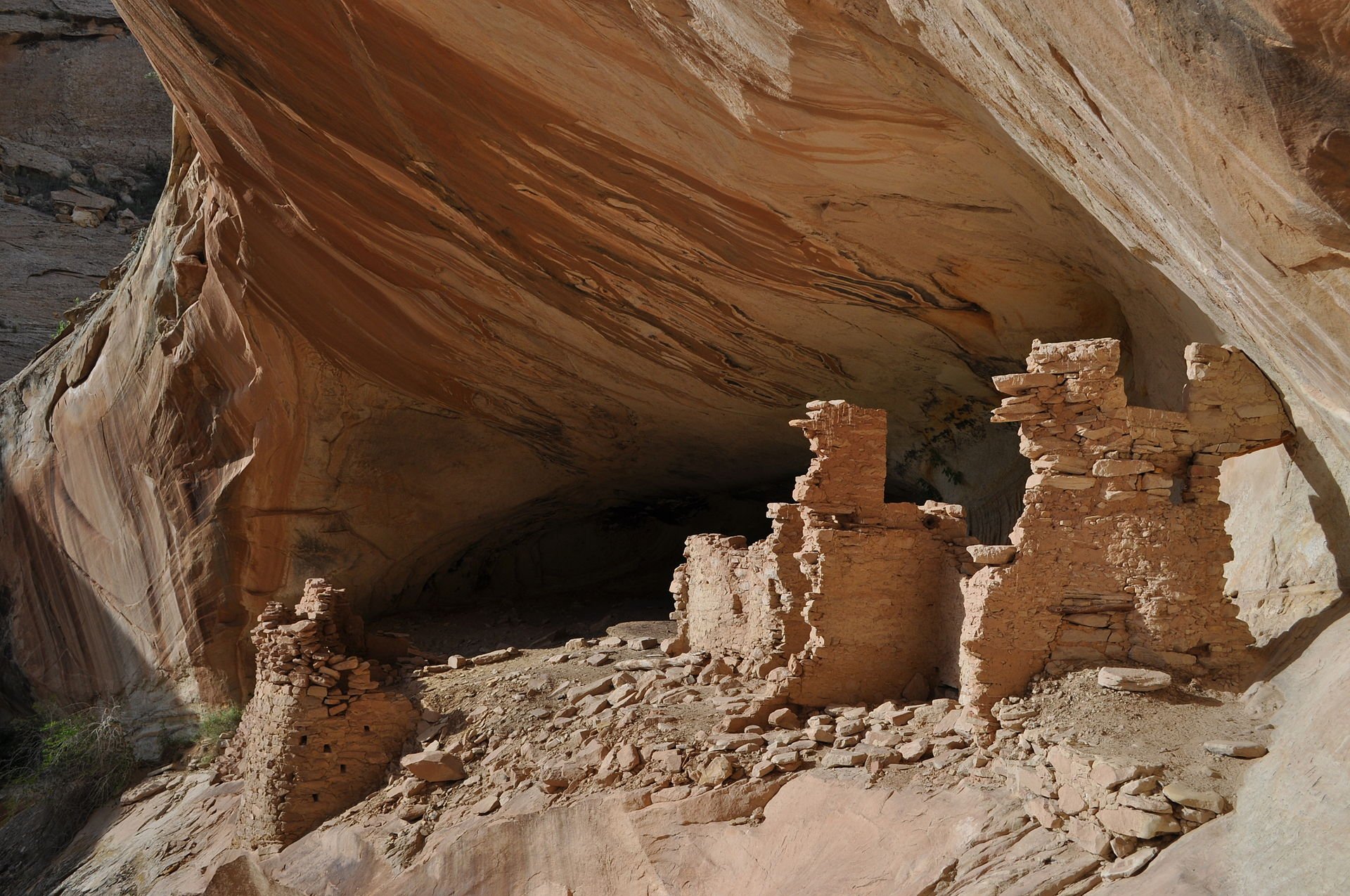 This place is a part of the history of all the Native peoples in this region. It’s like a book for us, and when many tribes have a chapter in this book, it tells us a lot about why we are the way we are. But it’s also part of the history of the peoples of the United States and the world.1 - Jim Enote, Pueblo of Zuni, Bears Ears Coalition

Rich in natural beauty and cultural significance, Bears Ears National Monument is a unique site for understanding the history and traditions of native peoples. The stories of these peoples date back thousands of years and continue to this day with Native Tribes who are fighting tirelessly to protect these lands.

The lands in and around Bears Ears National Monument contain some of the earliest signs of human settlement in the United States. Evidence for native peoples living in the area has been dated to around 11,000 BCE, though native tradition claims peoples have occupied these lands for much longer. Archaeologists have identified more than 100,000 cultural and archaeological sites, making it "the most significant unprotected archaeological area in the United States."2 Over the millennia, native peoples have left behind ancient burial sites, dwelling places, rock paintings, tools, and pottery shards as evidence of their occupation of these special lands. The land was populated the most between 500 BCE and 750 CE during the Basketmaker period and between 750 CE to 1290 CE during the Pueblo period. Most of the ruins are found atop buttes and not in canyons. The structures that remain functioned as villages, roads, holy sites, and water wheels, and various other parts of daily life. Navajo and Ute peoples settling on the land established hogans, sweat lodges, tipis, and rock art, while travelers from Navajo, Ute, and Paiute Tribes left trails while passing through for hunting and ceremonial activities. More than a dozen Tribes and twenty Pueblos have cultural ties to Bears Ears.

These lands of cultural, archaeological, and natural significance have become increasingly under threat. Looters and grave robbers have destroyed ancient burial sites and desecrated sacred sites. Oil, gas, and mineral companies have sought to exploit the lands for energy, which can cause pollution, diminish scenic vistas, and permanently alter the landscape. Disrespectful, and often uninformed, visitors have contributed to the destruction of sites. Some destruction is more overt, such as taking artifacts and removing ancient art, while other actions, such as hiking, walking dogs, or lighting campfires, still injure sites even if unintentionally. Together, these actions are weakening the integrity of Bears Ears as a landscape that remains important to modern-day Tribes.

In July 2015, leaders from five Tribes united to form the Bears Ears Inter-Tribal Coalition, or simply known as the Bears Ears Coalition, to ensure the land is protected. The Coalition consists of the Hopi Tribe, Navajo Nation, Ute Mountain Ute Tribe, Pueblo of Zuni, and the Ute Indian Tribe. Thirty additional tribes have expressed support of the Bears Ears Coalition and their mission. The Bears Ears Coalition seeks to protect cultural and archaeological sites as well as the native peoples whose use of the land for ceremonies and other practices are intertwined with spiritual and historical traditions. Furthermore, the Bears Ears Coalition welcomes all to visit the land, appreciate its beauty, and engage in recreational activities such as hiking, camping, biking, and horseback riding. On December 26, 2016, President Barack Obama used his authority under the 1906 Antiquities Act to establish the Bears Ears National Monument, totaling 1.35 million acres.

A number of groups have pushed back against Bears Ears becoming a national monument. Some of the inhabitants of nearby Blanding, Utah, were upset that the federal government asserted their control of the land and the national attention it brought to the area. Some non-Native people believe they know how to manage the historically significant and ancient land of various Tribes better than the coalition of the Ute Mountain Ute Tribe, Navajo Nation, Ute Indian Tribe of the Uintah Ouray, Hopi Nation, and Zuni Tribe which informs the Bureau of Land Management and the National Forest Service.

The biggest opposition for the land's national monument status comes from those who seek to drill and mine the region. This is the chief complaint of Utah's governor, Gary Herbert, President Donald Trump, Secretary of the Interior Ryan Zinke, and numerous oil and gas companies. Their interest in exploiting the land for capital gain are directly at odds with the protections put in place by President Obama. Bears Ears Coalition is not opposed to drilling outside monument boundaries and may still recognize existing development opportunities. The group argues:

Bears Ears area is too valuable to drill for temporary economic gain. Rather than sacrificing this incomparable place for the extraction of the low-quality energy and mineral resources found here which exist in abundance elsewhere, the National Park-quality landscape, wildlife, recreational, cultural, and historical resources found in the Bears Ears region deserve permanent protection.3

According to the Bears Ears Coalition, creating a national monument allows people to be stewards of this special place. All are welcome to visit and feel connected to the land. At the same time, the national monument specifically recognizes that Native peoples have unique spiritual and ancestral ties to the land, and these ties can be reforged and strengthened under the land's federal protection. Bears Ears National Monument, therefore, is part of a longer movement toward healing in Tribal communities.

The first section of Obama’s proclamation explains clearly why he designated the site a national monument:

Rising from the center of the southeastern Utah landscape and visible from every direction are twin buttes so distinctive that in each of the native languages of the region their name is the same: Hoon'Naqvut, Shash Jáa, Kwiyagatu Nukavachi, Ansh An Lashokdiwe, or 'Bears Ears.' For hundreds of generations, native peoples lived in the surrounding deep sandstone canyons, desert mesas, and meadow mountaintops, which constitute one of the densest and most significant cultural landscapes in the United States. Abundant rock art, ancient cliff dwellings, ceremonial sites, and countless other artifacts provide an extraordinary archaeological and cultural record that is important to us all, but most notably the land is profoundly sacred to many Native American tribes, including the Ute Mountain Ute Tribe, Navajo Nation, Ute Indian Tribe of the Uintah Ouray, Hopi Nation, and Zuni Tribe.4

In December 2017, President Donald Trump, at the request of Utah Governor Herbert, ordered Bears Ears be reduced by 85% to 201,876 acres. The Department of the Interior spent most of 2017 reviewing whether the boundaries of national monuments were too large under the Antiquities Act and therefore a sign of government overreach. Native Tribes, archaeologists, and conservation groups condemned the decision and sued the federal government. In March 2018, documents between state and federal officials revealed that oil, gas, and uranium development were a major factor in shrinking Bears Ears, without the consultation of Native Tribes. The Bears Ears Coalition and fellow supporters are continuing to fight for the protection of Bears Ears and its precious natural and cultural resources.5