Prairie City was one of a number of mining cities that developed quickly after the discovery of gold but dwindled equally quickly once the gold was no longer there. There is nothing left of Prairie City today--only a historic marker to it indicate that it once existed. It is believed to have been located in the vicinity of the Prairie Oaks subdivision. 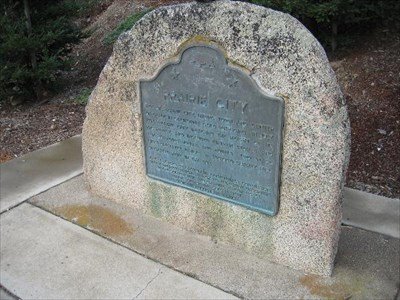 The once-thriving community of Prairie City was apparently formed in 1853 when the Natoma Water and Mining Company constructed a number of houses for miners and their families. The settlement was located roughly two miles south of what is now Folsom and 21 miles from Sacramento.

Within a short period of time, Prairie City had 1,500 residents, including a small number of families. Many of the original settlers in Prairie City came down from the Sierra Nevada mountains and found the area comparatively safe and stable, and free from the heavy snow of the Sierras.

Placer deposits began to decline in 1854 and some of the miners began to leave Prairie City. By 1865, all of the gold in Prairie City had been worked out and the town was abandoned. The post office closed in 1866, and although the school in Prairie City continued operation until the 1880s, there was little left of the town.

In 1997, when an off-ramp was being constructed in the vicinity of Prairie City, the bodies of twelve people were unearthed. It is believed that they were Prairie City residents and their remains were reinterred at the Mormon Island relocation cemetery.