The Battle of Camp Allegheny Allegheny Mountain December 13, 1861 In December, Confederate forces under Col. Edward Johnson occupied the summit of Allegheny Mountain to defend the Staunton-Parkersburg Pike. A Union force under Brig. Gen. Robert Milroy attacked Johnson on December 13. Fighting continued for much of the morning as each side maneuvered to gain the advantage. Finally, Milroy’s troops were repulsed, and he retreated to his camps near Cheat Mountain. At year’s end, Edward Johnson remained at Camp Allegheny with five regiments, and Henry Heth was at Lewisburg with two regiments. 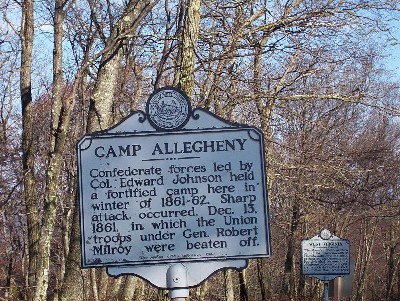 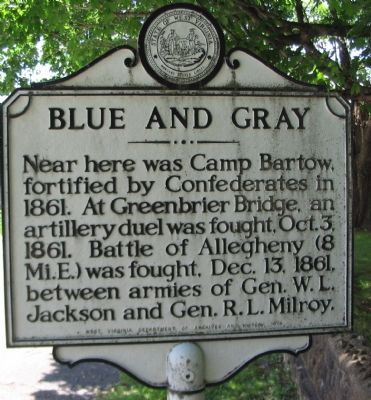 In a piercing winter wind, fighting continued for much of the sunny morning as each side maneuvered on the hillside fields and woods to gain the advantage. On the right flank, Milroy had posted a strong force in a mountain clearing, among the fallen timber, stumps and brush, which proved to be too difficult for the Confederate infantry to drive off.

A Confederate artillery battery unlimbered and unleashed a "storm of round shot and canister among them, knocking their timber defenses about their heads, and making their nest too hot to hold them..." Finally, Milroy's troops were repulsed, and he retreated to his camps at Green Spring Run near Cheat Mountain. Johnson's losses were high: 25 men were killed and 97 were wounded in the engagement, plus 23 went missing.

According to one Confederate soldier in the 52nd Virginia Infantry:

I had a splendid position in this battle and could see the whole fight without having to take any part in it, and I remember how I thought Colonel Johnson must be the most wonderful hero in the world, as I saw him at one point, where his men were hard pressed, snatch a musket in one hand and, swinging a big club in the other, he led his line right up among the enemy, driving them headlong down the mountain, killing and wounding many with the bayonet and capturing a large number of prisoners...