This historical marker locates the spot where Atlanta began. In 1839 a man named "Cousin John" Thrasher founded a settlement he called Thrasherville, from which the city would arise. He established Thrasherville to house the workers he hired to build a railroad embankment that would link two railroads, the Monroe Railroad and the Western Atlantic Railroad. The settlement was located near the planned terminus of the W.A. Railroad. Construction took two years, long enough for the settlement to become permanent. Here were Atlanta's many firsts, including the first store, religious service, labor unrest, social event, and baby. The settlement had a few unofficial names but was finally officially called Marthasville in 1843 before being reincorporated as Atlanta in 1845.

The marker is located outside of the State Bar of Georgia building. 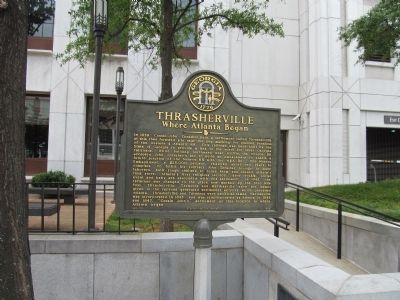