One may be surprised to find a Coca-Cola museum in Vicksburg but one resident, Joseph Biedenharn, played a crucial role in revolutionizing the soft drink industry and propelling the Coca-Cola company into the global business it is today. In this building on March 12th, 1894 Biedenharn was the first to bottle Coca-Cola. This pioneering step allowed the drink to be distributed anywhere. Before bottling, Coca-Cola was only available in soda fountains. The building, which was built in 1890 and housed the Biedenharn Candy Company, is now the Biedenharn Coca-Cola Museum. Inside, visitors will see exhibits describing the early history of the Coca-Cola company, how the drink was first bottled (replica bottling equipment is also displayed), past and present Coca-Cola memorabilia, and the history of the Biedenharn family. The building was added to the National Register of Historic Places in 1977.

The Biedenharn Coca-Cola Museum explores the history of Coca-Cola, which was first bottled in this building in 1894. 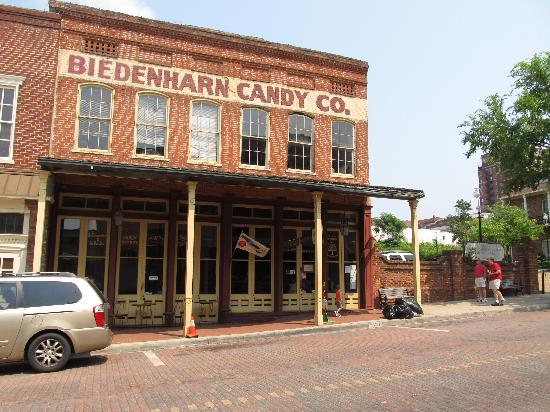 Joseph Biedenharn was born on December 13, 1886 in Monroe, Mississippi to German parents. At some point the family moved to Vicksburg where Biedenharn's father and uncle opened a candy store and soda fountain business called Biedenharn and Brother. Biedenharn took over the business when he was a teenager and changed the name to Biedenharn Candy Company. He and his father built the store building in 1890. Initially it was divided into two; one half was the candy business and the other was a shoe store operated by his father, Herman.

Four years earlier, pharmacist John Smith Pemberton invented Coca-Cola in Atlanta, selling the first drinks on May 8th, 1886 at Jacob's pharmacy. At the time, it was thought that carbonated drinks were good for one's health, which is why soda fountains were located pharmacies. Sales of the drink were modest in the first year—just around nine each day—and in the end Pemberton was unable to increase its popularity. As a result, he sold his interest in the business to others, including Asa Chandler, the businessman who would launch Coca-Cola into the large company it is today.

Presumably around 1894, Chandler asked Biedenharn if he would sell the drink. Biedenharn agreed and the drink quickly became popular, but he realized that it was only available to those who came to his store. To make Coca-Cola more accessible, he came up with the idea to bottle it (the first bottle used was called a Hutchison bottle) and sent a case to Chandler, who, apparently was initially cool to the idea. Nonetheless, bottling was a stroke of genius as Bidenharn's sales and profits rose dramatically. Chandler eventually came around to the idea and licensed franchises throughout the country. The Biedenharn's had rights to open franchises in Mississippi but opened ones in Louisiana and Texas as well. The family bottled Coca-Cola at the store and other locations before building a new bottling facility in 1938.

It appears that the family owned the original candy store building until 1941. In the coming decades, it housed a number of different businesses. However, the family bought it in 1979 and began an effort to restore it for the purpose of opening a museum. The family donated it to the Vicksburg Foundation for Historic Preservation, which owns and operates the museum.

"The Birth of a Refreshing Idea." The Coca-Cola Company." Accessed January 25, 2021. https://www.coca-colacompany.com/company/history/the-birth-of-a-refreshing-idea.