Constructed in 1876, this Mississippi Courthouse replaced a previous courthouse that stood at this location until it was destroyed by a fire. On March 17, 1886, that courthouse was the scene of one of the most notorious massacres in state history, an event known as the Carroll County Courthouse Massacre.

This courthouse was constructed in 1876 and replaced a previous structure that had been the site of the Carroll County Courthouse massacre. 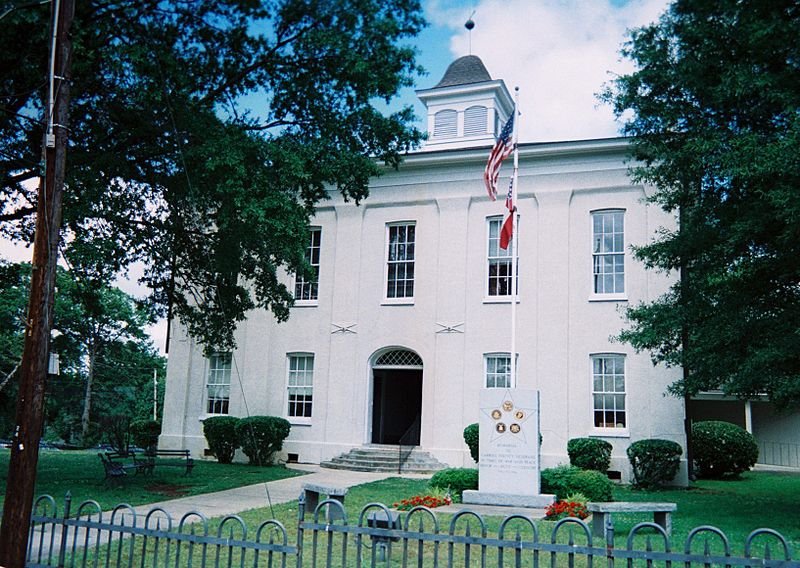 The courthouse was the site of a tragic and racially-motivated massacre on March 17, 1866. On that day, a group of fifty white supremacists killed twenty-three African Americans in the courthouse and on the courthouse grounds. The event that led to the massacre was a trial of a white man accused of attempted murder. The white man in question, Carrollton attorney James Liddell, had attempted to kill Ed and Charley Brown who were of mixed African American and Native American heritage. Liddell's attack on the two brothers was part of his attempt to reassert white supremacy in the wake of the Confederacy's defeat and emancipation.

The incident that led to Liddell's attempt to kill the two men demonstrates the extent to which some white Southerners would go to reassert the absolute domination of white people over people of color in the early years of Reconstruction. Nearly two months prior to the courthouse massacre, Ed and Charley Brown had accidentally spilled some molasses on a white man while making a delivery to a local saloon. Although the two men apologized and were likely physically assaulted for this perceived violation of the racial hierarchy, local whites continued to fume about the incident. Carrollton attorney James Liddell decided to take matters into his own hands and on the afternoon of February 12, 1866, he assaulted the two men. Not satisfied, Liddell again assaulted the men in the evening and the altercation ended with shots fired by both Liddell and the Browns.

The Browns filed charges against Liddell for attempted murder. From the perspective of most white residents, the idea that black men could and would file charges against a white man demonstrated their worst fears about the end of white dominance. As a result, a mob of fifty white men armed themselves and stormed the courthouse on the day of Riddell's trial. The mob murdered the two black plaintiffs in the courthouse and then attempted to kill all of the African Americans who had come to the courthouse to witness the trial of a white man who had been accused of trying to kill two black men. None of the mob were ever charged with a crime. State officials blamed African Americans for the attack and the federal government refused to intervene.