This historic marker recognizes the 1st Kansas Colored Infantry which became the first African American unit to see battle in the Civil War when they defeated Missouri raiders in the fall of 1862-months prior to the Emancipation Proclamation which recognized Black freedom and authorized Black military service. The First Kansas Colored were outnumbered and besieged by Confederate troops in the Battle of Poison Spring which took place nearby. The Battle of Poison Spring was a bloody one for the 1st, as they lost 117 soldiers and many more were wounded during the fighting. Some were even killed after being captured, demonstrating the extreme hate that Black soldiers experienced in the South.

The marker of the 1st Kansas Colored Infantry 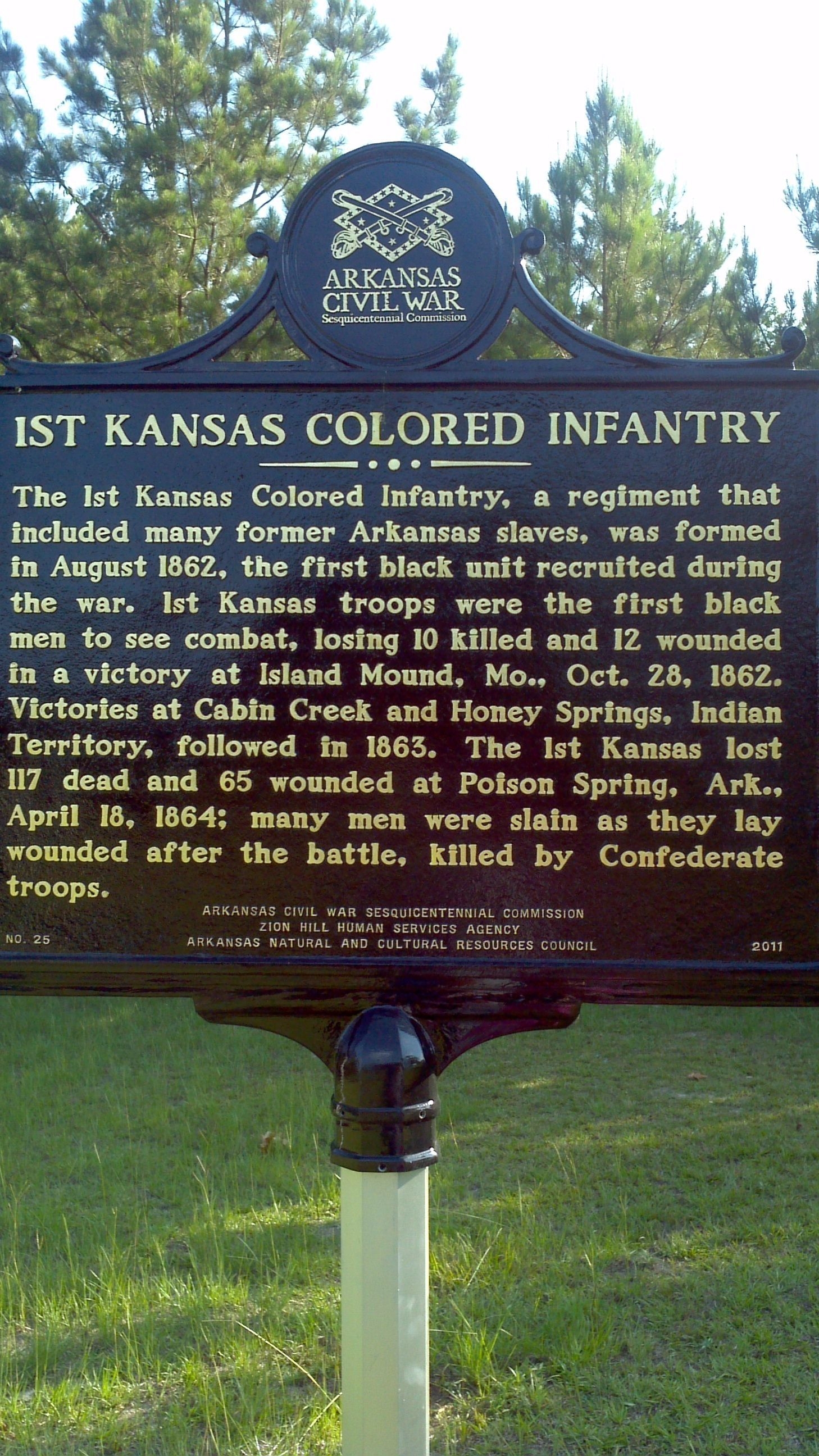 The marker is located near a single American flag that honors the Union soldiers who brought Arkansas back into the nation. 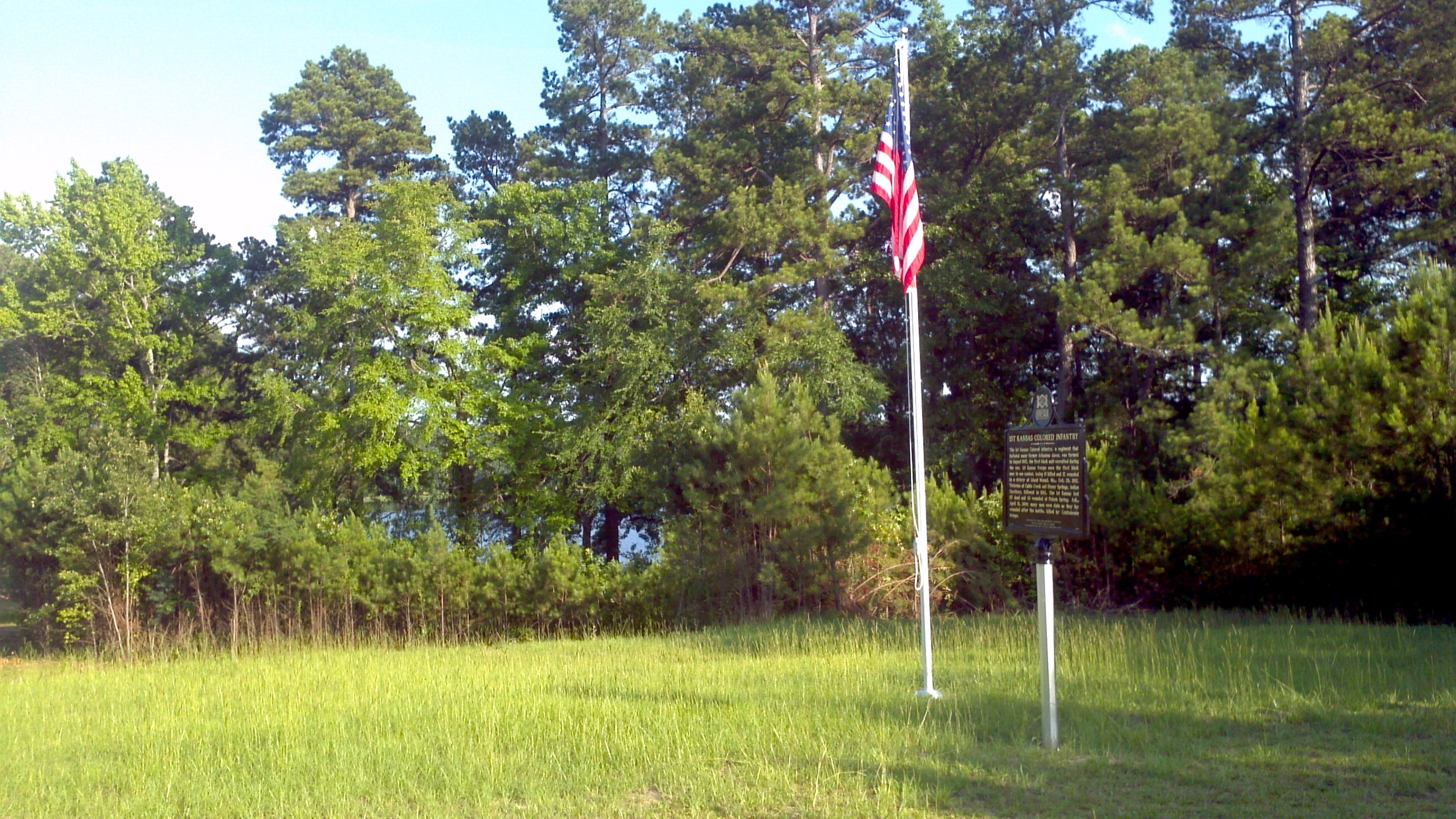 The 1st Kansas Colored Infantry began to train in August of 1862. At the time, the Union did not allow African Americans to serve and fight in the Union Army. As with all firsts, this would attract some controversy and occurred largely without governmental authorization or authority. Many whites were skeptical that Black men possessed the intelligence and courage required to be a soldier, a view that was quickly disproved when the 1st Kansas Colored repelled an attack of Missourians in the fall of 1862.

Others who opposed Black enlistment suggested that Black men might naturally wish to enact revenge against white Southerners and this could lead to aggression beyond the accepted rules of warfare. As events would later demonstrate, it was Confederate officers and soldiers who massacred Black soldiers who had been taken prisoners. After the Emancipation Proclamation was signed in January 1863, Black men were officially permitted to join the Union Army in segregated units organized under the banner of the United States Colored Troops (USCT).

The man responsible for their recruiting the First Kansas Colored prior to the Emancipation was Kansas Senator James H. Lane. Lane was focused on winning the war. As he saw it, “A Negro could stop a bullet as well as a white man.” Although race was still at the forefront of most of his rhetoric, Lane would fight for African Americans to join the war. Many fought against Lane on grounds that they believed that Black men would not fight when it got tough. However, this unit proved them wrong again and again as demonstrated by numerous quotes from Union officers in 1863.

Valor alone could not overcome a superior force, and the 1st Kansas Colored Infantry found themselves surrounded by Confederate troops near Island Mound in Missouri. The Black troops were surrounded, but continued to fight hand to hand against mounted Confederate cavalry and infantry. Major Richard G. Ward said later that he “Never saw a braver sight than that handful of brave men." The Confederates were eventually forced to retreat with the arrival of Union reinforcements. African American soldiers had once again proven themselves in battle, but many were captured and slaughtered rather than being taken to a prisoner of war camp along with white captives.

Rather than dissuading Black recruits, “Remember Poison Spring” would become a rallying cry Black regiments and the massacre of Black men became further motivation for former slaves to support the Union cause. By the end of the war, the First Kansas Colored lost over 300 men- one of the highest mortality rates of any Union regiment. Owing to their courage and impact on the war in Kansas, Missouri, and Arkansas, the First Kansas has become one of the most famous Union regiments.