Erected in 1865, the Merion Cricket Club is one of the most well-known private sporting clubs in the United States, famous for both tradition and heritage, as well as its sophisticated taste (members abide by a dress policy). The club is now located in Haverford, Pennsylvania, having been moved locations in 5 other separate instances. Currently boasting a membership of 2,500 people, the club dates back to the end of the Civil War when it was established by William Montgomery and Marshall Ewing. Today, the institution is best-known for its luscious greenery and history as the original home of the U.S. Open and the home of the first cricket tournament in the United States. Encouraging participation in sports and other activities, the Merion Cricket Club has been an avid supporter of cricket, golf, squash, and tennis since its founding.

Here is the modern-day Merion Cricket club, with its intricate architecture and beautiful lawn. 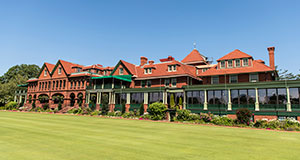 Here players are seen competing in a squash tournament inside the club. 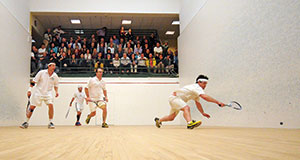 Here the historic Davis Cup is being held at the Merion Cricket Club; 8,000 people came to watch the event. 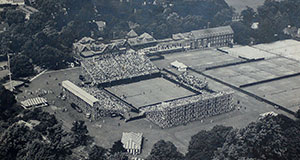 The Merion had its humble beginnings on an estate owned by Colonel Owen James, who helped create it. Contrary to its present state, the club did not have a real clubhouse nor did it own a cricket pitch that was in regulation in its early days. However, a turning point presented itself for the club when the Merion XI team won in their first cricket match. The club's cricket team would then venture across oceans in the following years to compete against some of the most renowned English cricket clubs, an opportunity that opened many doors for the future success and expansion of the club.

Soon, membership amounts exceeded the available space on the James' estate, and the club was relocated to Ardmore in 1873. This new area had five acres of land for the Merion to be built upon. Seven years later, two more acres of land were purchased so that room could be made renovated into tennis courts. Tennis was beginning to grow in popularity, and would eventually overtake the world of cricket. The Merion recognized this, and made the effort to adapt. Thus In 1892, the club was once again moved to Haverford and a larger 12 and a half acres of land were purchased.

Historically, a major event for the club was the hosting of the Pennsylvania State Lawn Tennis Championship, which continued annually for 80 years afterwards. Unfortunately, a fire demolished the club on January 4th, 1896. But, this tragedy presented itself as a potential advantage when Frank Furness, a highly-renowned architect from Philadelphia, offered to design an entirely new clubhouse. The new facility was marvel of beauty and engineering, attracting more club-goers than ever before. Additionally, it was around this time that tennis began to become a main focus for the organization, influenced by national trends and their establishment of a golf club (which is closely related to the sport of tennis). The Merion Cricket Club has since hosted the U.S. Open (a national championship of golf) five times, and held the Davis Cup once in 1939 where 8,000 spectators attended. After the Davis Cup, the Merion gained publicity for its hospitality and the great job it had done with hosting such a large event.

Along with these accomplishments, the club has an impressive list of athletic achievements. In 1961, five of the Merion Golf Club's players won five separate national championships; the players were even recognized by Sport's Illustrated Magazine. As aforementioned, the Merion is known for not only its support of the sport of squash, but also for development of the sport. The Merion Cricket Club held the first squash tournament in 1962. To keep true to the club's traditions, it reintroduced cricket to visitors in 1972 and still continues to host cricket events today.

The Merion Cricket Club has an extensive list of historical attributes, but it is also a wonderful place to visit, if not simply for its beauty and atmosphere. The club features fine dining, gorgeous architecture, and a ballroom. The lawn furnished for the grass courts upholds a reputation as one of the best in the world for lawn tennis. Its greenery was even given its own name: the Great Lawn, and one of their formal restaurants has an enclosed porch where dining members can overlook the lawn while eating. Promoting a family-friendly atmosphere, adults and children alike can find activities that will keep them engaged and having fun.

The club is a major marker of history and is still commemorated for this. 2015 marked the 105th anniversary of the Merion Cricket Club. Many events were held for this major point in the club's timeline, such as a complimentary New Year's Open House (which also took place during the Merion's beginning), and a Founder's Day celebration on December 16th. Aside from this birthday, annual events are also hosted to continue the traditions and history. Christmas Balls have held each December, and squash tournaments play out annually. The Merion Cricket Club will always be a famous landmark in American athletic history and may go on setting new standards for all private clubs alike.