The Chrysler Building is an Art Deco-style skyscraper located in the Turtle Bay neighborhood of Midtown Manhattan and was the former headquarters of the Chrysler Corporation. Designed by William Van Alen, it stands at a towering 1,046 feet tall and was the world's tallest building before being surpassed by the iconic Empire State Building in April 1931. It is the tallest brick building in the world, although it contains a steel frame. When Walter Chrysler commissioned the building, he dedicated it to "world commerce and industry."

The Chrysler Building is a classic example of Art Deco architecture and considered by many contemporary architects to be one of the finest buildings in New York City.

The Chrysler Building as seen from the Empire State Building, the Chrysler's successor as world's tallest building. 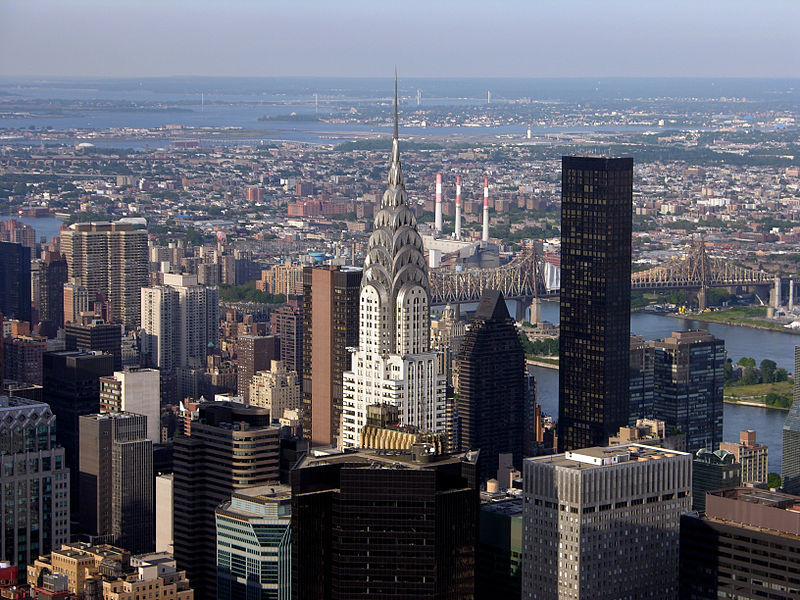 After the groundbreaking of the building on September 19, 1928, it was evident that there was a fierce competition in New York City to build the world's tallest skyscraper. When William Van Alen first designed the building, it was originally created for contractor William H. Reynolds and was intended to be a speculative office building. As work continued on the Chrysler Building, a former partner of Alen named H. Craig Severance was working to complete a rival building, the Bank of Manhattan Trust building at 40 Wall Street. Originally designed to be 68 stories, or roughly two feet taller than the original plans for the Chrysler Building, it was then changed to 71 stories before being completed in May 1930. Van Alen and Chrysler, though, had other plans. In secrecy, they arranged an off-site construction of an 185-foot spire, which was then brought for construction within the building in four sections. On October 23, 1929, the spire was hoisted and constructed on the building, surpassing the Manhattan Trust Building by 121 feet, much to the chagrin of the Severance team.

Once complete, the Chrysler Building climbed 77 stories into the New York skyline, using 20,961 tons of steel, nearly 400,000 rivets, and 3,826,000 bricks to bring this skyscraper to fruition. At the time, it was the tallest building in the world ahead of the Manhattan Trust Building. However, the title of world's tallest building would soon change hands once the Empire State Building completed construction less than one year later on May 1, 1931, with 102 stories to its name. Although the Chrysler Building has lost the distinction of being known as the world's tallest building, its still considered to be a beloved landmark by New Yorkers.