The Chilkoot Trail and the Town Dyea (18

The Chilkoot Trail and the town of Dyea are located in the Taiya River Valley, in Skagway, Alaska. In the beginning, the Chilkoot trail served as a dividing line between two Native American tribes. As time went on, the trail became a popular route during the 1897-1899 gold rush. Thousands of people traveled the Chilkoot trail, making the trail become a major port for gold. The town of Dyea began to expanded and development as more miners, and their families, migrated there to find gold. Today, Dyea is a nearly abandoned town located in the middle of the Taiya River Valley. The Chilkoot Trail has been constructed for hikers to be able to hike through the trail.

The gold miners would stay in shacks and tents. They never had a permanent home during the Gold Rush. 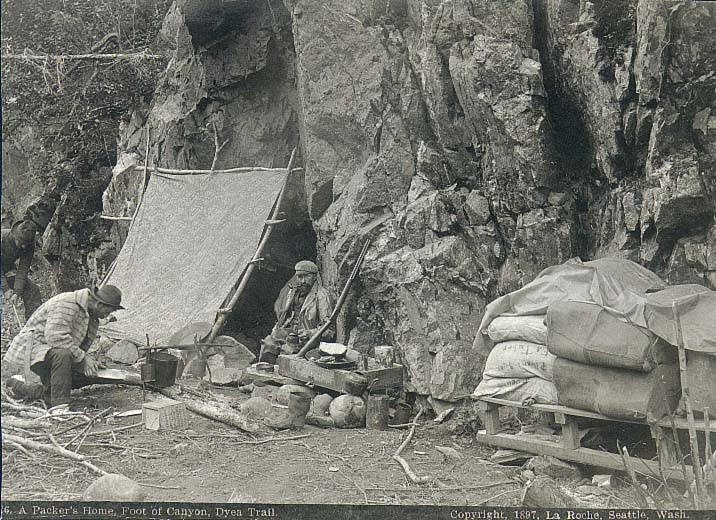 Miners, and their families,settling down for a short period of time in the valley. 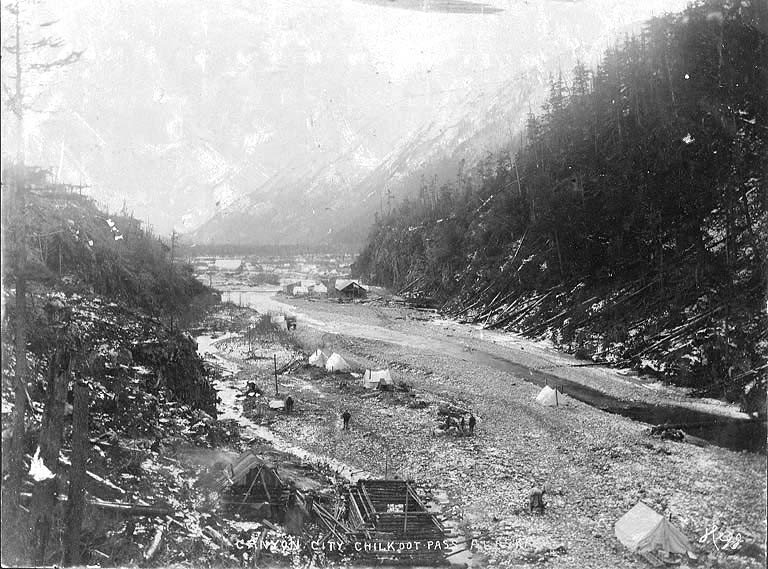 Until the 1870s, the Taiya River Valley, served as a dividing line between the coastal Tlingit Indians and the Interior Athabascan Indians. The Chilkoot trail was also used for travelling and trading goods. The trail was a connecting path for travelers and tribes. By the time the gold rush started, the trail was one of the main links that connected coastal Alaska and the Yukon River drainage. This valley and trail became very popular for expeditions. Frederick Schwatka, Dr. Willis Everette, and William Olgivie were some of the explorers that traveled along the Chilkoot Trail.

During the gold rush, people began to settle down in the town of Dyea. Housing mainly consisted of tents and shacks.This was because people knew they would not be staying here long. Gold miners, were only traveling to find gold. The miners would settle down for a short period time, and then miners would find another place to find gold. As more people migrated here, trams and telephone/telegraph lines were installed. Although the town was expanding, it was still very small. In 1898, the population was about 800 people. By 1899, the town was nearly abandoned.

A rivalry is the main cause for the abandonment of Dyea. This was between the Chilkoot Pass route and the White Pass route. William Moore found the White Pass to be less steep. The distance to the lakes was longer, but Moore saw a possibility in development. Moore developed a trail for the White Pass, but by 1896, very few people used this route. The Chilkoot Pass was the most popular route. During the peak, 1889, there were over 200 businesses open on this pass. After the gold rush, travelers stopped passing through the Chilkoot trail and the town of Dyea. This led to loss in businesses, and people leaving the town to find better. There are still some buildlings remaining in Dyea, but most were either moved or burned down. Very few people still live in the town of Dyea, leaving the town nearly abandoned. Today, the Chilkoot Trail is used for hiking. The trail was constructed to make hiking much easier.