Located in the middle of the Sacramento City Cemetery, this marker commemorates the life of Luella Buckminster Johnston, a stalwart supporter of women's suffrage. Johnston was also the first woman elected to municipal office in Sacramento and won this election before women secured recognition of their right to vote throughout the United States. The marker in Sacramento City Cemetery honors Johnston's political career and her work on behalf of women's rights. 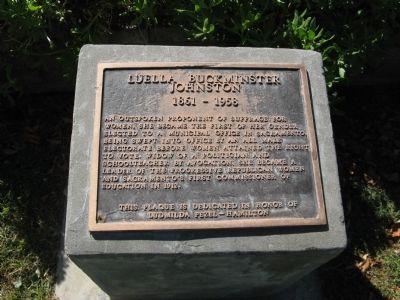 At Sacramento City Cemetery, a marker honors the contributions of Luella Buckminster Johnston. Johnston was an outspoken supporter of women's suffrage and was very involved in the civic and political life of Sacramento.

At a time when women could not yet vote, Johnston was elected to a one-year term on the city commission in 1912. She was the first woman elected to municipal office in the city. The commission--made up of men--appointed her Sacramento's first Commissioner of Education. With the appointment, Johnston became the first female commissioner in the state of California.