Opened in 1999, this museum honors the most famous and revered country singer in American history: Hank Williams (1922-1953). The museum features the most complete collection of William's memorabilia in the country. Items on display include Williams' clothing (boots, hats, suits, ties, etc.), guitars, a Steinway piano, sheet music, the Baby Blue 1952 Cadillac, and many other items. The museum opened thanks to the efforts of a local named Cecil Jackson, who was one of Williams' biggest fans.

The Hank Williams Museum opened in 1999. 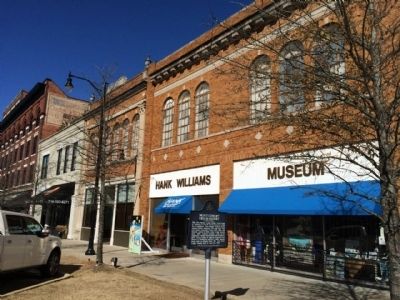 Hank Williams would grow up to become one of the country's first superstars. He started learning how to sing and play guitar a young age. His early teacher and mentor, a local blues musician named Rufus "Tee tot" Payne, would influence Williams' music for the rest of his life. Williams' first break came in 1941 when he and his band called the Drifting Cowboys were hired to host a short radio show in Montgomery. A few years later, Williams signed his first contract with MGM in 1947 after recording two successful songs for the company. That same year, Williams released a single title "Move it on over", which became an immediate hit and the start of his rise to stardom. He consistently wrote hit songs during the several years and his concerts were in high demand. He dealt with the pressure of his celebrity status led him to abuse alcohol and prescription drugs (he suffered from back pain). As a result, his health suffered greatly, culminating in his death on January 1, 1953 due to heart failure.