A monument to African American folk hero John Henry was dedicated in 1972 and stood at this location for over forty years before it was relocated to the new John Henry Historical Park on the other side of the tunnel. According to legend, John Henry was born a slave in the 1840s but was freed after the war. The story has transformed over the years and many still cling to the mythical story of Henry defeating a steam-powered drill in a battle of man vs machine that continues to resonate with those fearing changes due to technology.

Statue of John Henry at the Great Bend Tunnel. 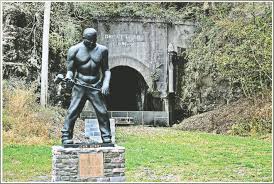 This picture of an unidentified man according to some scholars could be John Henry. However, there is no concrete evidence to prove this person is John Henry. 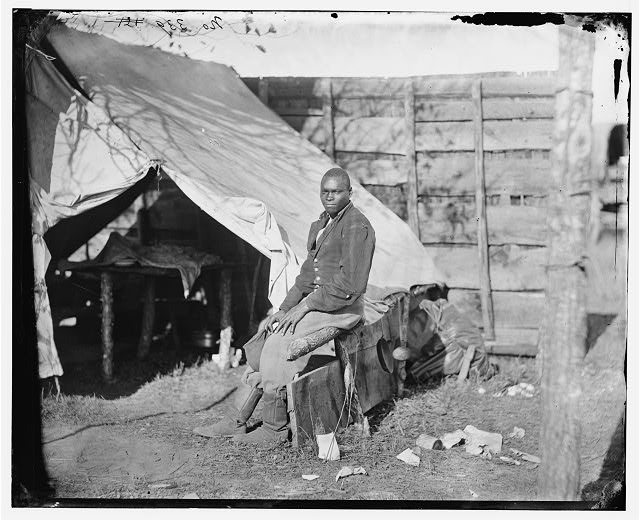 This statue of John Henry stood at the overlook above the Great Bend Tunnel for four decades before being relocated to the John Henry Historical park in Talcott. 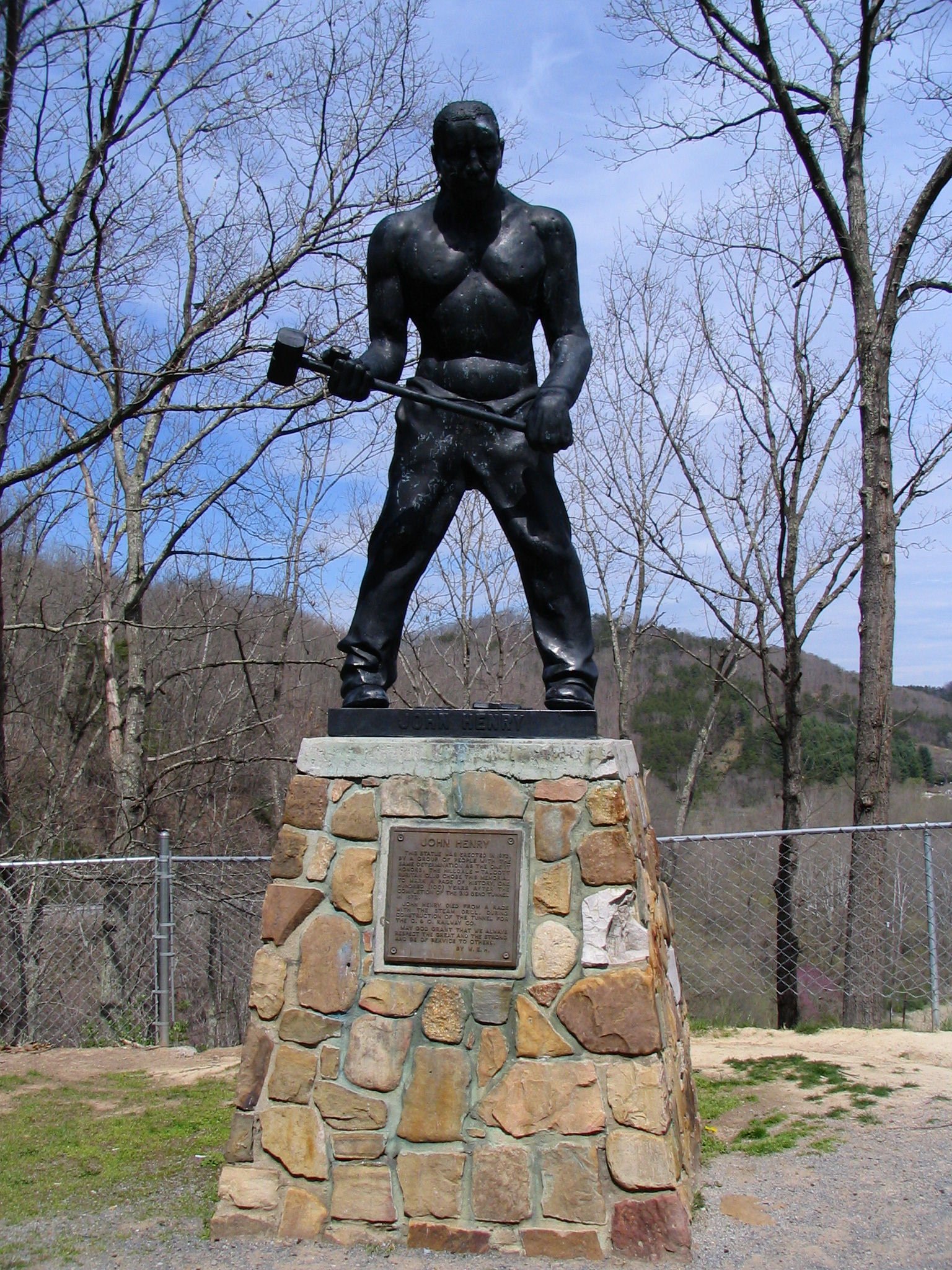 Thanks to the work of historians, the story of John Henry now considers the likelihood that Henry was a convict laborer who perished while being leased to the C & O Railroad along with hundreds of other men who died from inhaling fragments of rock while drilling into the stone in order to place dynamite charges. The discovery of several hundred skeletons near the Virginia State Penitentiary, along with the original lyrics of the Ballad of John Henry, suggests that he did not die from exhaustion after "battling" a steam drill but rather from a the railroad's failure to offer basic protections for the lungs of their convict laborers.

John Henry was a New Jersey native and made his way towards Appalachia as a grave digger for the Union Army at a very young age. At 19, John Henry was arrested for stealing from a grocery store, but in reality, his conviction and sentencing may have been at least partially motivated by racism and the profitable nature of the convict lease system. He was sent to the Virginia Penitentiary and the C&O railroad company paid the Virginia Penitentiary to "lease" their convicts to help build the railroads. The system of convict labor became notorious for the death rate among many laborers, especially those involved in tunnel construction and mining. The cause of John Henry's death is unknown, but it was most likely a combination of factors. It is possible that he also perished from exhaustion from an event similar to the song that bears his name, but rather than "fighting the steam drill," voluntarily, he was likely the victim of overwork and poor working conditions.

The aforementioned information comes from Steel Drivin' Man by Scott Reynolds Nelson. Steel Drivin' Man tells all about the workers of the early railroads and John Henry's life. Those who really want to understand Henry's life and death should read about the convict lease system that forced thousands of African Americans to work as captives without pay long after slavery was abolished. John was a part of this system and was worked to death because of it. John was convicted of theft, according to Nelson, and likely sentenced to a long term in prison after the amount of property he was accused of taking was wildly exaggerated to secure a felony conviction rather than a misdemeanor. After his conviction, Henry was sent to a prison in Virginia. Who then sent him to work for the Chesapeake and Ohio Railroad.

The fabled story of John Henry in American history exemplifies a tale that bridges cultural gaps. As Nelson recounts in his book Steel Drivin’ Man, finding the real John Henry was difficult and led to many variations of Henry’s life. famous musicians ranging from genres such as blues, country, folk, and bluegrass have covered numerous variations of the song. Whether or not the real John Henry's identity surfaces, the story of his life represents many harsh realities in American history for African Americans and laborers in the railroad industry.

John Henry the Legend began with his fellow convicts working on the railroad. They would chant the tale of John Henry, using the song to signal when to drive their hammers down. The tale originally centered on the tragedy of his life, how he worked and worked until he died. But along the way it changed. The tail became the story of a man who fought for others against the company, against taking humanity out of work in place of machines. From there, folk singers and country music stars like Johnny Cash made the story more widespread in the United States. In the year 2000, Disney made an animated short about John Henry along with other well known American tall tales.

John Henry was the first Black superhero in a way. As his tale moved from being depressing to uplifting, he became someone for African American youth to look up to. John Henry was also an inspiration for Superman. So much so that after the Death of Superman storyline a successor for Superman was named John Henry Irons (the superhero Steel).

Below is a short Q&A with the author of Steel Drivin' Man, Scott Reynolds Nelson:

Why do you think John's legend isn't that widespread today? I live in WV and many of the people of my generation have never heard of the tale.

I think it's partly generational. Most students in my generation and earlier learned the class in chorus because it was a song free of copyright. Hundreds of thousands of GIs heard it during World War II because it was widely distributed by the US government as proof that the US wasn't a racial empire like the Nazis and the Japanese.

Why is it that not many acknowledge his pop culture influence?

Partly it's because he was Black, and partly because the Communist Party was important in spreading the story. As the anti-Communist wave came in the 1950s, the song of John Henry was somewhat suspect.

Finally, do you think the story of the man will ever be able to rival that of the legend?

I think the story is so much deeper and richer than the legend. The legend is beautiful, and I love the song. But when you see the tragedy of his real life it only deepens the beauty of the song.