This historical marker stands in front of the house where famed jazz pianist, composer and singer Nat "King" Cole (1919-1965) spent his early childhood years. He would become one of the more beloved artists of the 20th century, most well known for his smooth, velvety voice, and several hit songs such as "Straight Up and Fly Right", "Unforgettable", and of course "The Christmas Song (Chestnuts Roasting on an Open Fire)". Cole also appeared in several films beginning in the early 1940s, further boosting his popularity. The house was moved here to the campus of Alabama State University from its original location in November, 2000. The university has been in the process of renovating the interior with the goal of opening it as a museum in 2017.

This historical marker was erected in 2015 in front of Nat "King" Cole's childhood home. 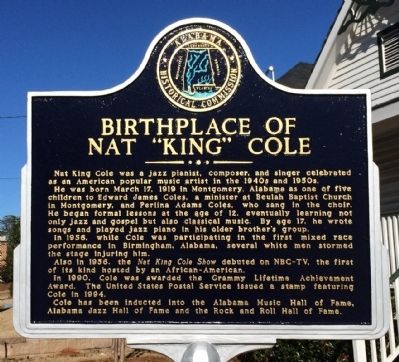 The house is to the right of the marker.

Cole's parents decided to move to Chicago to leave the repressive racial environment of Montgomery in 1923. They were one of the millions of African African families who moved to northwards in what is called the Great Migration between 1915-1970. He and his siblings, and his mother who was a choir singer, were all musically talented. Cole started receiving music lessons at the age of 12, and by 17 he was writing songs and playing the piano in eldest brother's group. The group would play in several places in Chicago and Cole met Louis Armstrong and other soon-to-be famous artists.

After getting married in 1937, he moved to Los Angeles and formed a trio. In 1939 he began to sing to provide some variety to the band's music. The trio was hired as the house band for the 331 Club in 1942 and a year later—when he was just 25 years old—they got their first real big break with the song "Straighten Up and Fly Right", which described a monkey on a buzzard's back. The song signaled the expansion of Cole's music into pop and his popularity increased. His solo career began to take off in the early 1950s. By 1955 the trio broke up, since the role of the other members became just his backup.

The next milestones came in 1956. Cole participated in the first mixed-race performance in Birmingham, Alabama. An group angry white members of the audience stormed the stage and beat Cole and the other performers. To the chagrin of many African Americans, Cole forgave them, but eventually he was recognized for his composure and dignity in handling the situation. Cole did support the Civil Rights movement. For example, he sued hotels in Illinois and Pennsylvania for not allowing himself and other African Americans to stay in them. Also that same year, Cole became the first African American to host a variety tv show (despite being well received, it only lasted 30 episodes because there was no national sponsor, a fact Cole blamed on the fact that he was a Black man).

His presence on the pop charts slowed down in the late 1950s but he still remained a popular artist. In 1964, years of smoking caught up to him, and he died a few months after learning he had lung cancer. He was only 45 years old when he passed away. His funeral was attended by Frank Sinatra, Rosemary Clooney, and other celebrities of the day.