Opening in 1967, The South Street Seaport Museum tells the history of New York City’s 19th century waterfront. The Seaport is a designated historic district, distinct from the neighboring Financial District. It features some of the oldest architecture in downtown Manhattan, and includes the largest concentration of restored early 19th-century commercial buildings in the city. This includes renovated original mercantile buildings, renovated sailing ships, the former Fulton Fish Market, and modern tourist malls featuring food, shopping and nightlife, with a view of the Brooklyn Bridge. At the entrance to the Seaport is the Titanic Memorial lighthouse.

The Peking is a four-masted ship constructed in 1911, one of many ships on display at the South Street Seaport Museum 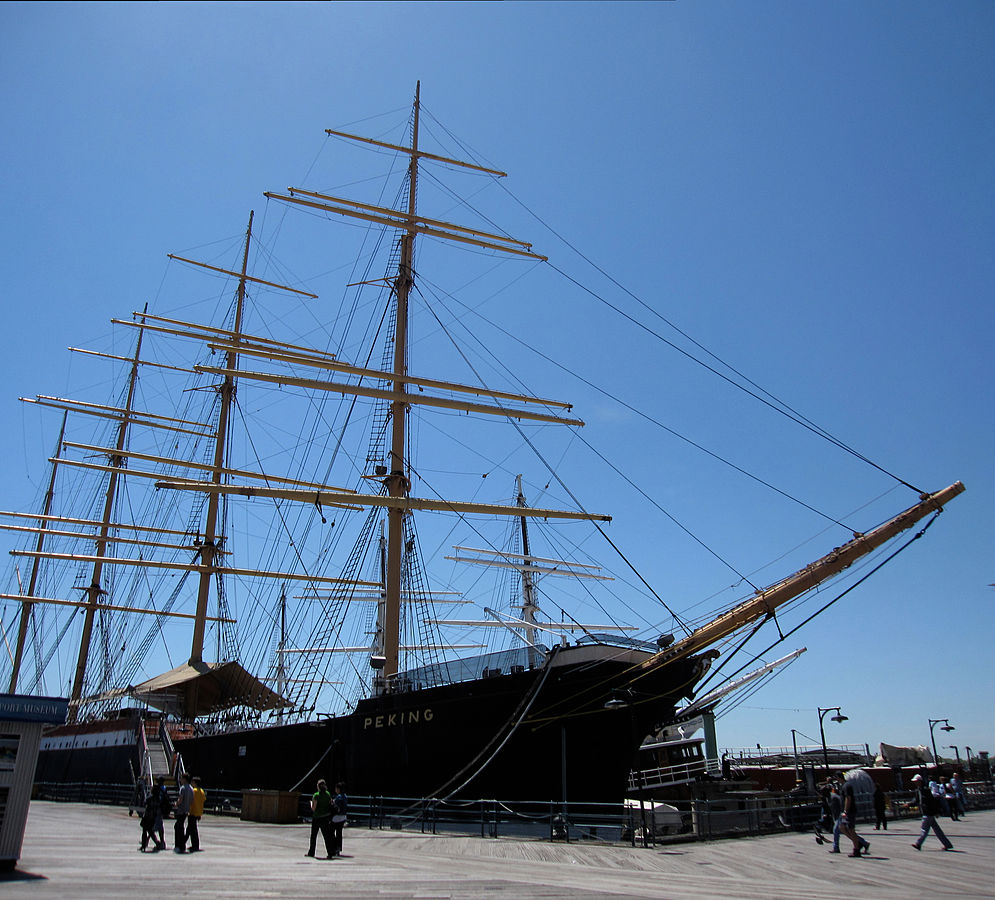 Founded in 1967, the South Street Seaport Museum celebrates the rich maritime history of NYC’s 19th Century waterfront. The Museum’s building is a part of the Schermerhorn Row complex, a series of warehouses built in the early 19th century. Within the buildings there are remains of two mid-19th century hotels. The museum preserves and interprets the history of New York City as a world port place where goods, labor, and cultures are exchanged through work, commerce, and the interaction of diverse communities. From transatlantic shipping and immigration to New York’s rise to economic pre-eminence, New York City’s waterfront has played a critical role in developments that have transformed the entire city, state, and nation.

Designated by Congress as America’s National Maritime Museum in 1998, it is located in a 12 square-block historic district on the East River in Lower Manhattan, the site of the original port of New York City. The museum is home to Bowne Printers, who carry on the age old tradition of job printing (small batch printing), and Bowne & Co. Stationers, which is New York’s oldest existing business under the same name, originally founded in 1775. The museum is also home to a fleet of 6 ships including the 1907 lightship Ambrose, a "floating lighthouse which guided ships safely from the Atlantic Ocean into the broad mouth of the lower New York Bay, the 1885 ship Wavertree, one of the last large sailing ships built of wrought iron, the 1885 schooner Pioneer, and an authentic 19th Century Schooner with public sails daily from May thru October. Also berthed at Pier 16 are the 1911 barquePeking, a nitrate clipper of the famous F. Laietz line of Hamburg, the 1893 Essex-built fishing schooner Lettie G. Howard, now sailing as a Sailing School Vessel, and the 1930 tug W.O. Decker, the last surviving New York-built wooden steam tug.

By the late-1950s, Pier 15, 16, and part of 17 were mostly vacant. South Street Seaport Museum was founded and opened by Peter and Norma Stanford. When originally opened as a museum, the focus of the Seaport Museum conservation was to be an educational historic site, with shops mostly operating as reconstructions of working environments found during the Seaport's heyday circa 1820-1860. Visitors can not only tour the displays, but they can also enjoy voyages on many of the above listed ships.