Temple Emanu-El has been an important center for Jewish cultural and religious life in Birmingham since its founding in 1882. The current temple was built in 1912, replacing a smaller one constructed in 1889 located at 5th Avenue and 17th Street. The original temple was the first synagogue built in Jefferson County. The congregation follows Reform Judaism.

Temple Emanu-El was founded in 1882 with 86 families. This temple building, the congregation's second synagogue, was constructed in 1912. 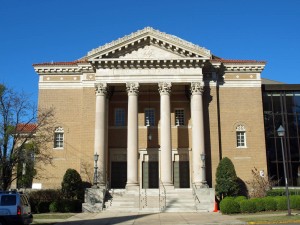 Before 1870 and the discovery large iron ore deposits, this part of the Jefferson County was essentially uninhabited. The discovery attracted many people, including Jewish merchants who wanted to take advantage of the business prospects that would arise with industries that would eventually be established in the city. Jewish families began to arrive in the 1870s, though many stayed away from the city during its cholera outbreak in 1873. Sometime in the late 1870s, these families formed the first local Jewish organization. It wasn't until 1881 however that Rosh Hashanah and Yom Kippur were first celebrated in the city. As noted above, in 1882 the families formed the congregation, worshipping at the Cumberland Presbyterian Church until the first temple was built. The congregation grew to several hundred families during the next four decades and remains a vibrant congregation today.