This family-owned and operated lumber and hardware store witnessed most of South Charleston's first century of development, becoming a city landmark and pillar of the local business community. Known since 1963 for the giant paint can model that perched atop the hardware store's roof, it was often referenced by locals for giving directions. The paint can was removed in 2015, three years after the business and building were sold.

View from the corner of D and 2nd Street. The iconic paint can, which long served as a landmark to the South Charleston community, was removed in 2015. The structure is now occupied by Ferguson Waterworks. Photo by Craig Cunningham. 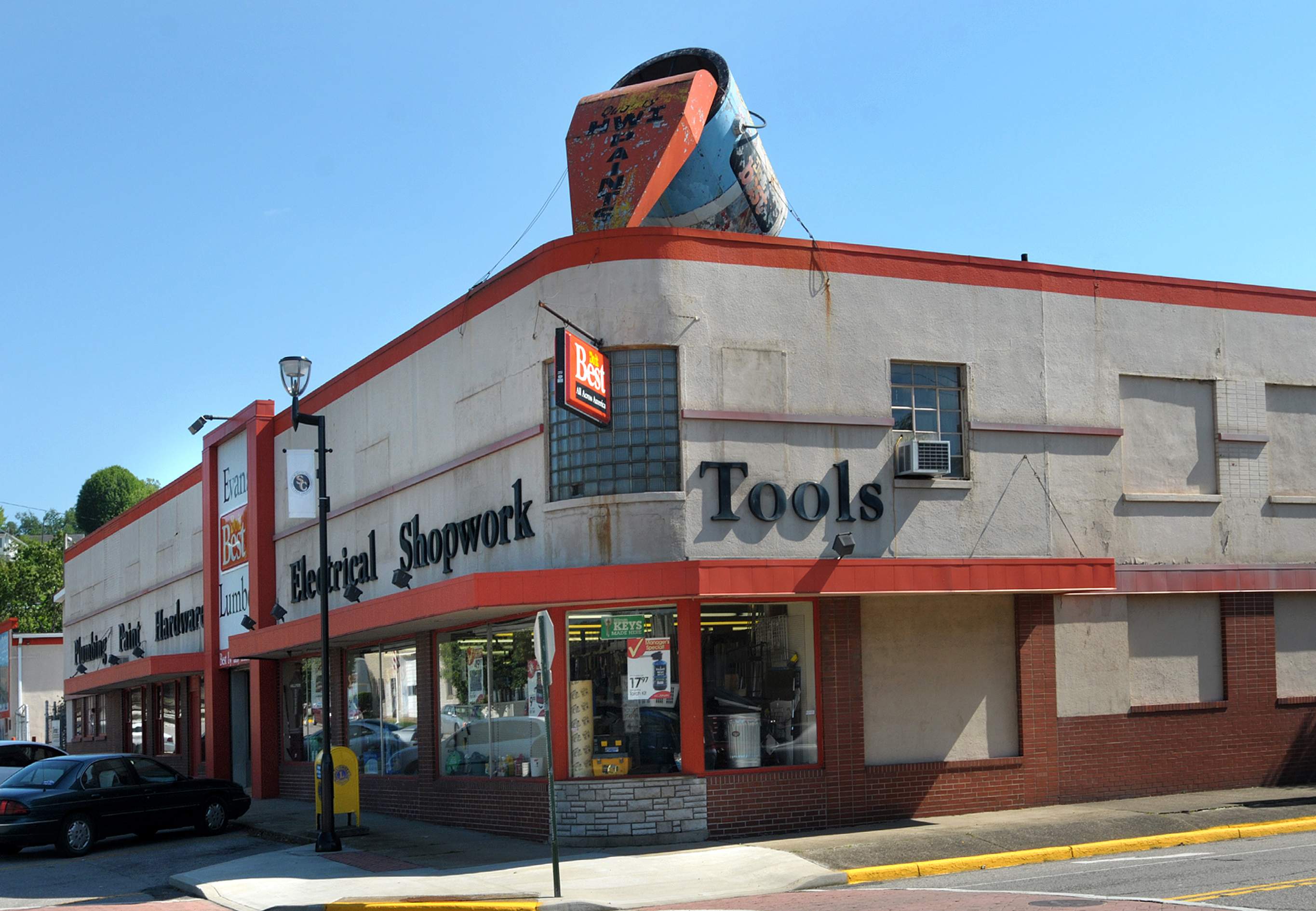 Don Evans, grandson of original founder Gus Evans. The company remained in family hands until closing in 2012, after 83 years in business. 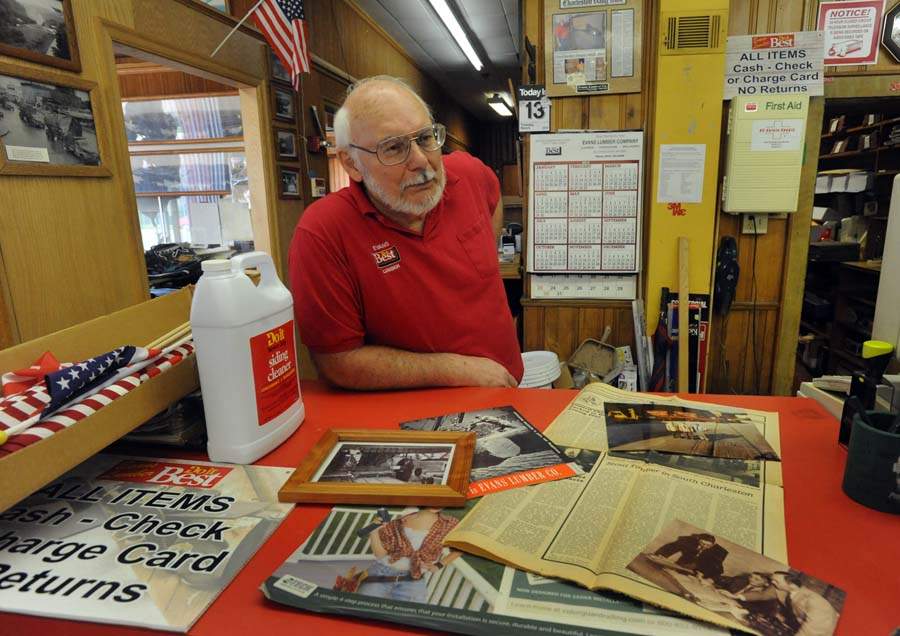 The iconic paint can, now in the possession of the City of South Charleston, stood atop Evans Lumber from 1963 to 2015.

Evans Lumber in 1939. The second floor was then a recent addition, modifying the original Superior Lumber and Supply building. Further remodels would take place in 1949, 1960, and 1972. 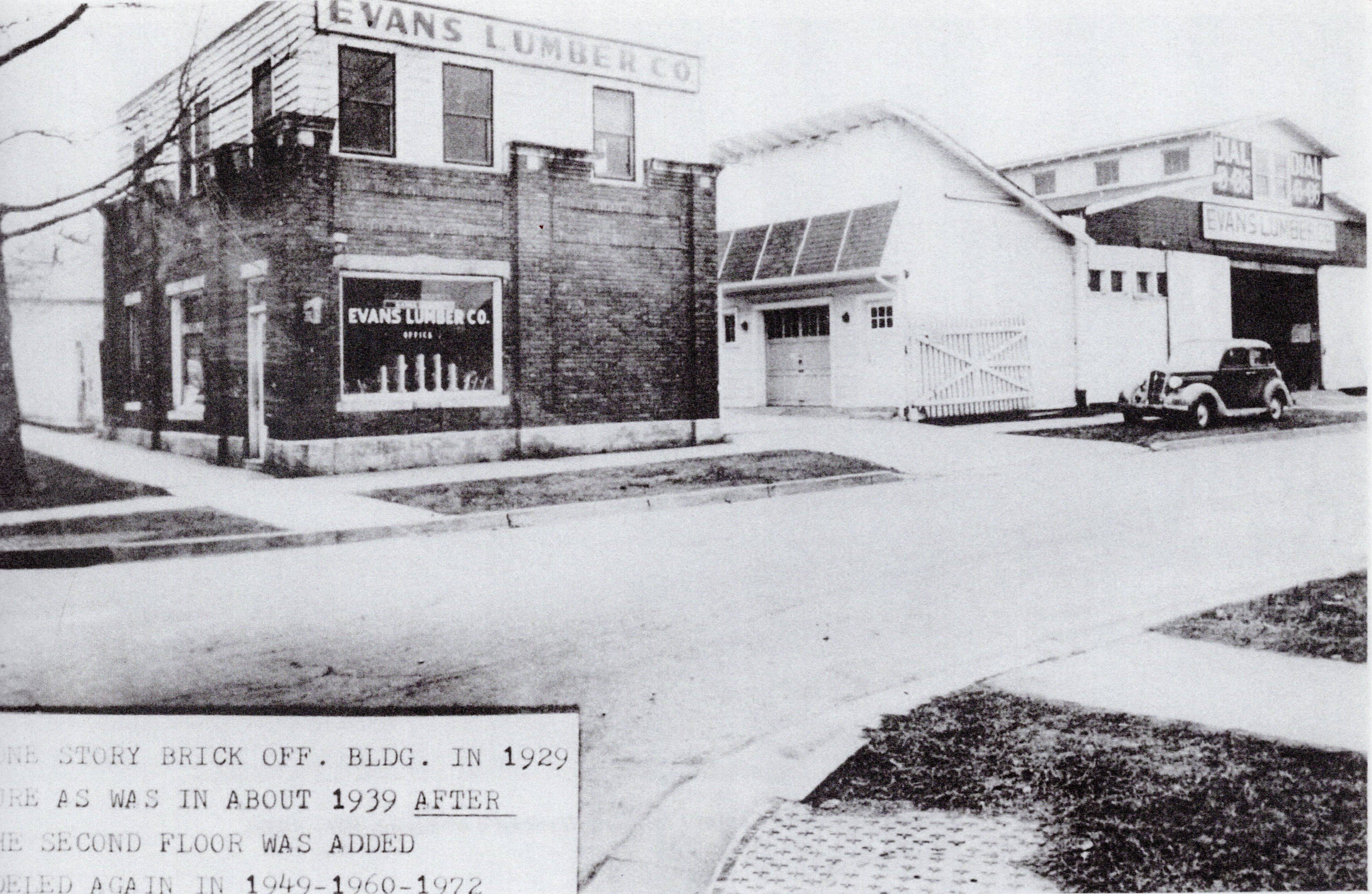 Gus Evans (seated center) with sons Pat (left) and Leslie (right). Along with son Everett and grandson Don, they would run the Evans Lumber Company for 83 years. 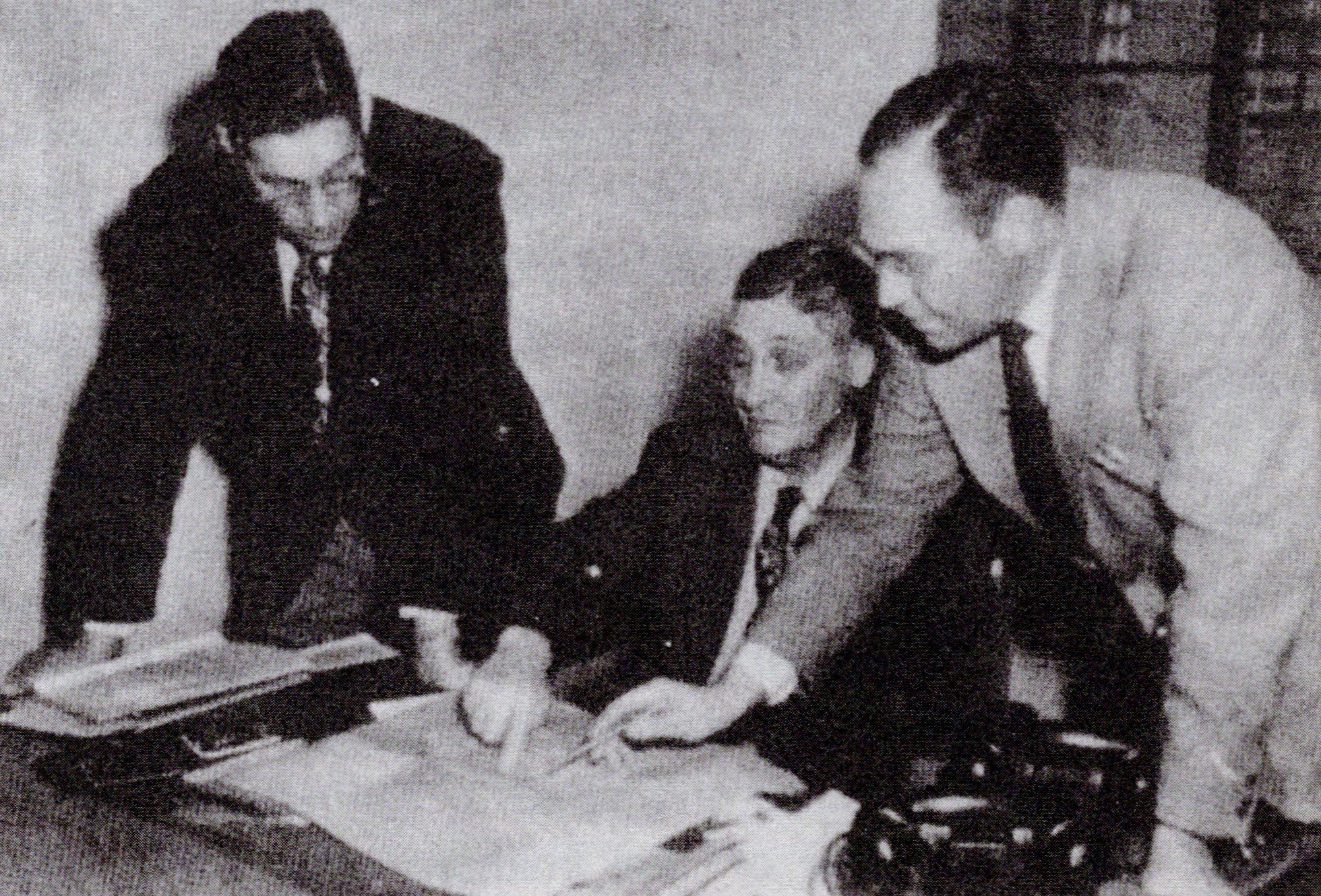 A fire scorched a lumber shed at Evans on May 18, 1977. 40 firefighters from South Charleston and additional hands from Charleston Fire Dept. battled a blaze that took 3 days to put out. 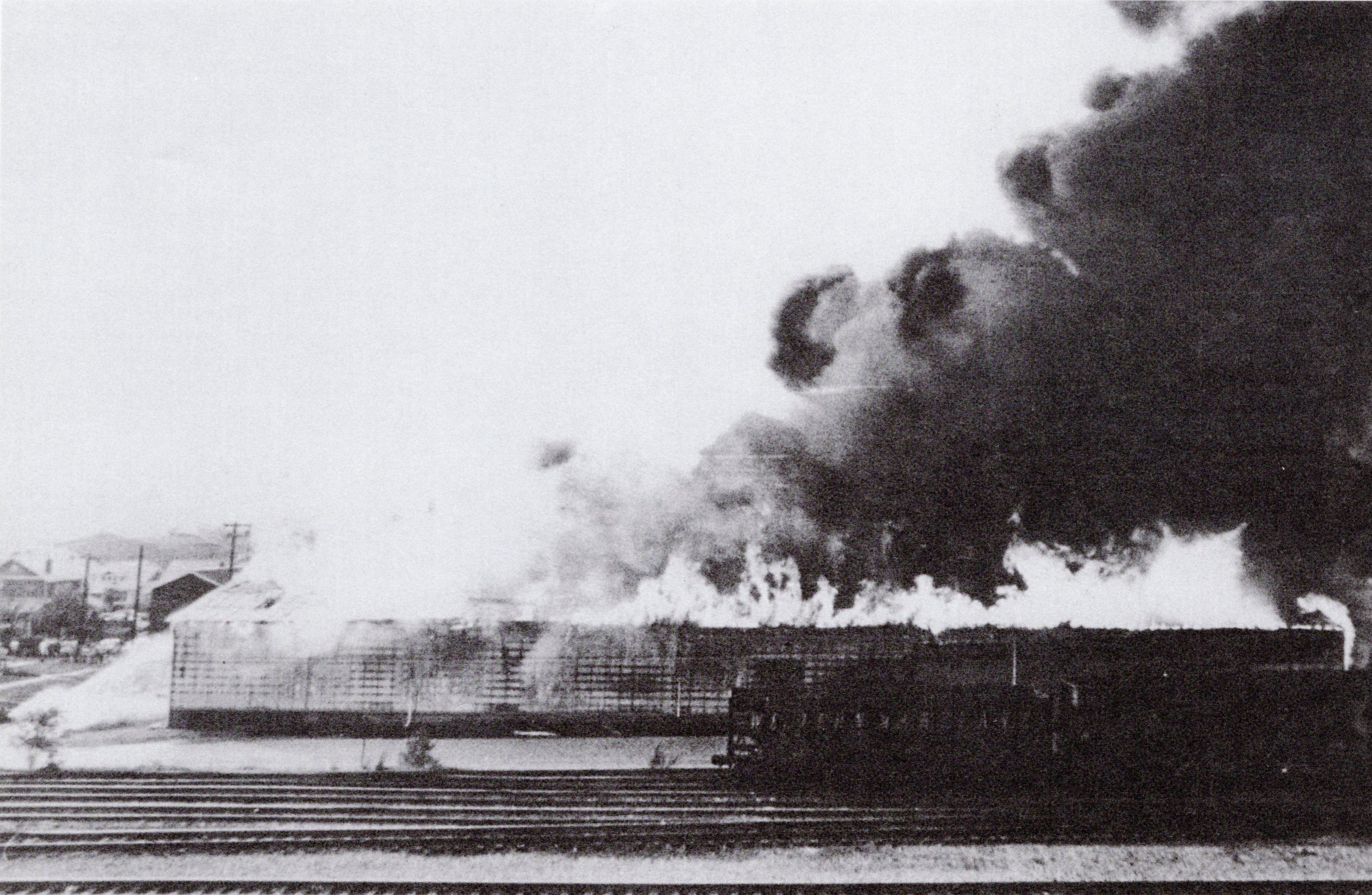 The 3-day Evans Lumber fire in May 1977, as viewed from across the I-64 Freeway. The freeway had only been completed the year before. 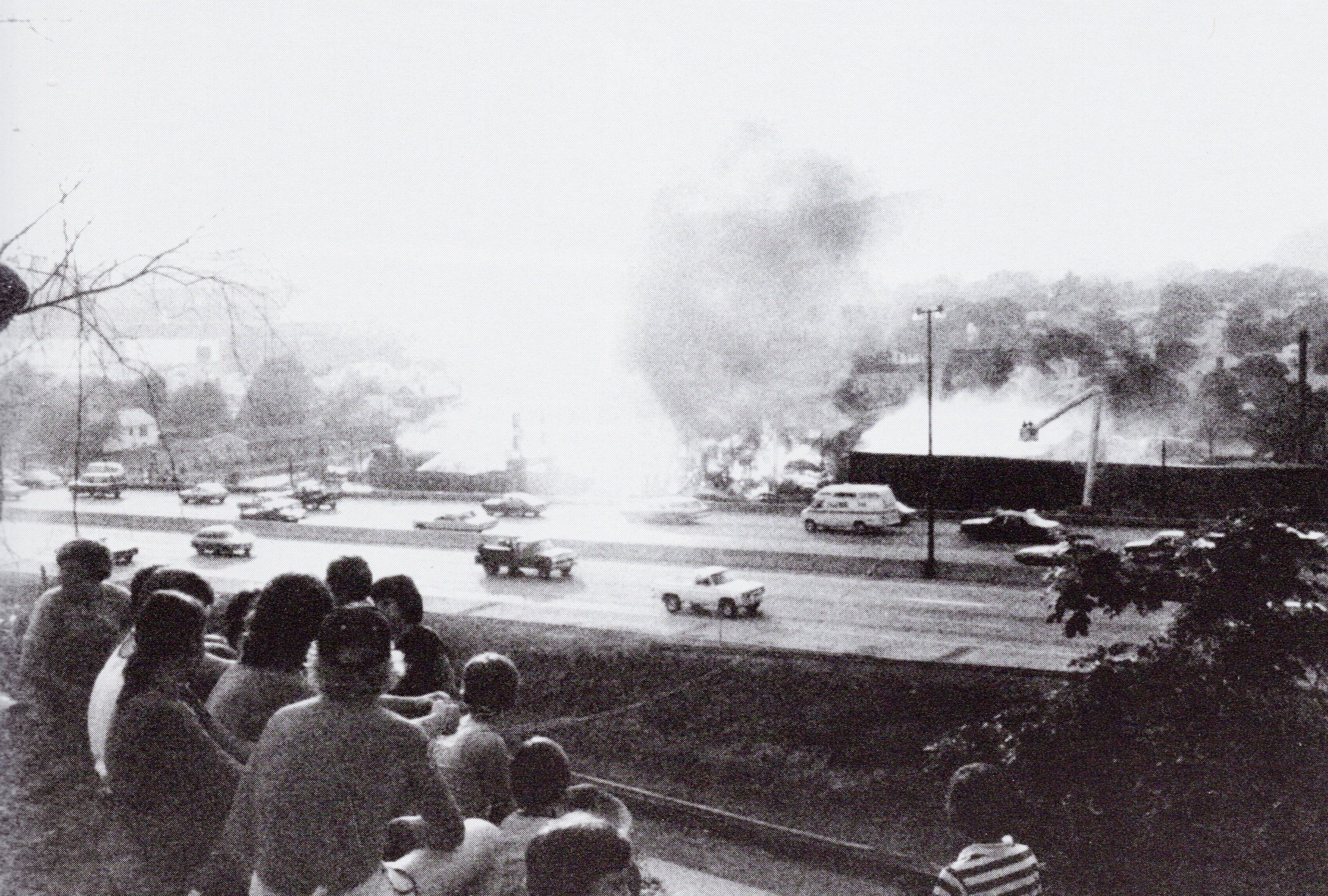 Removing the beloved paint can from the roof of Evans Lumber in 2015. The can is now in the possession of the City of South Charleston. 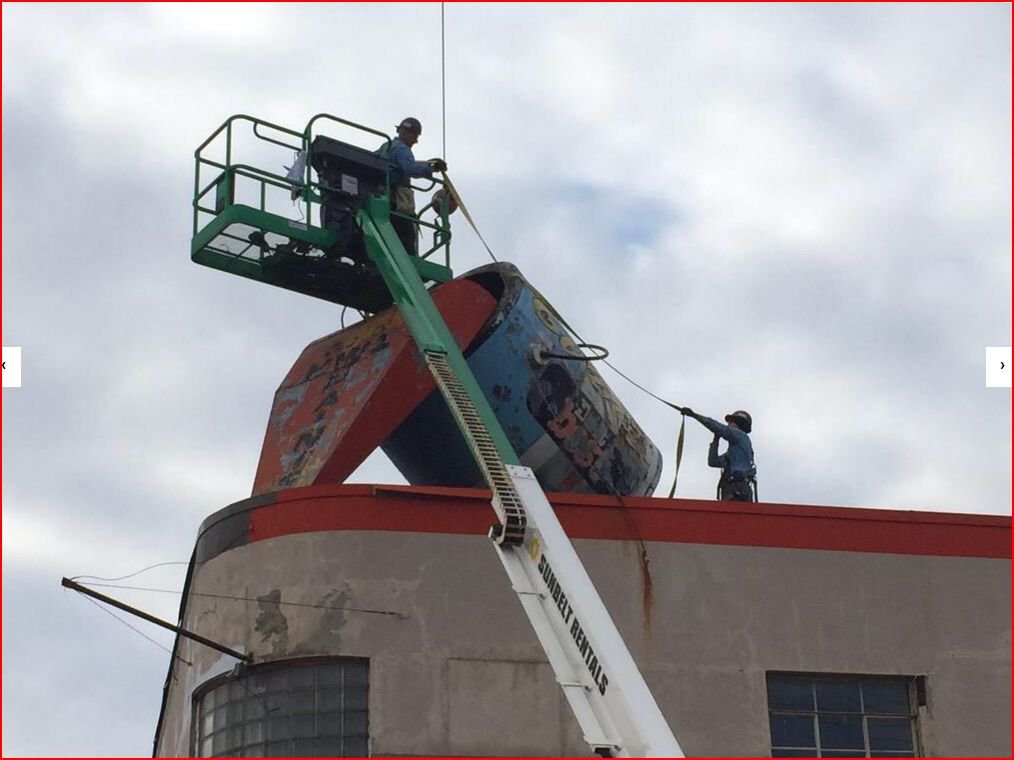 The paint can descends during the 2015 removal ceremony. At left is South Charleston Mayor Frank Mullens. To the paint can's right is Don Evans, last owner of Evans Lumber. 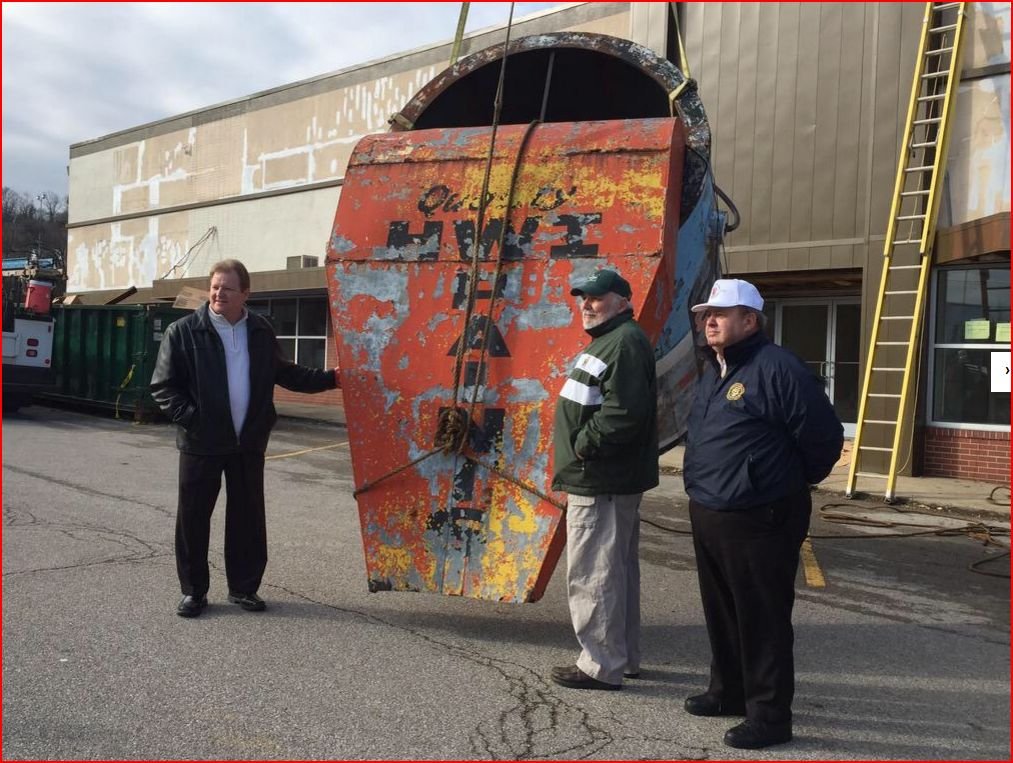 The original Superior Lumber building in 1929. It had been vacant for some time when Evans and his partners purchased it that year. A second story was added the following decade (see 1939 photo above). 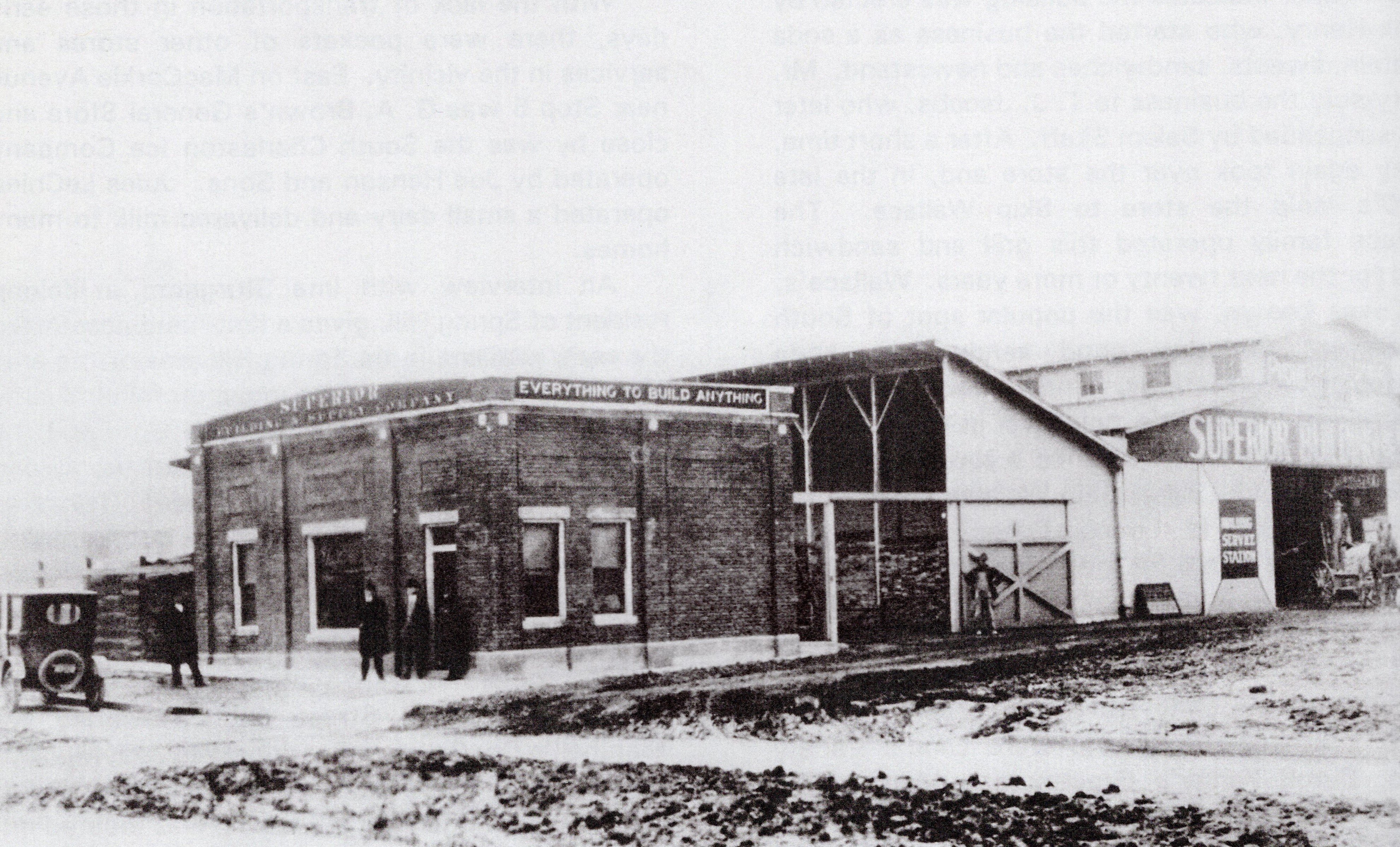 When Walter "Gus" Evans founded South Charleston Lumber along with several other stockholders  in 1929, he and his business partners selected the former site of Superior Lumber and Supply Company, which had been vacant for several years. As of 2008, on one wall of the original main lumber shed, the "Superior" brand name could still be seen painted on the side. The central location at D and 2nd Streets would prove fortuitous: Evans's company would occupy the site for the next 83 years until closing in 2012.

When the Great Depression hit in 1929, the rest of the lumber company's investors dropped out and Evans was able to buy out the remaining stock of the company. He and his three sons (Everett, Pat, and Leslie) kept the business running through the Great Depression, and after passing through this crucible, the name of the business was officially changed to Evans Lumber in 1940. Evans was no stranger to South Charleston--born across the river in Charleston in 1892, he'd gotten his start working in one of South Charleston's original industrial endeavors: the Dunkirk Glass factory.

The 1940s saw upgrades and expansions for Evans Lumber, with the addition of a sawmill on the premises (which later moved up the Elk River north of Clendenin) and a remodel to their office building late in the decade. They soon began to acquire timberland in several counties, accumulating roughly 6,000 acres to service the sawmill and supply the store. Most of the land has since been sold to the West Virginia Department of Natural Resources.

As the city's major retail supplier of building materials, Evans Lumber was at the heart of the development of South Charleston, and involved either directly or indirectly with the construction of many of its present-day homes--all while still under the ownership of Gus Evans's sons. Eventually, grandson Don Evans also joined the family business.

Time and circumstance caught up with the iconic business, however, as large nationwide hardware chains like Home Depot and Lowe's began to soak up much of the retail hardware market in the 1990s and 2000s. Despite joining the Do-It Best franchise to expand its retail options, Evans Lumber shuttered its doors in 2012, and its remaining stock of lumber was donated to a non-profit charity, Storehouse West Virginia. The landmark paint can sculpture atop the retail building, which had been in place since 1963, remained for another 3 years, eventually being removed after new tenant Ferguson Waterworks occupied the building in 2015. The paint can is currently in the possession of the City of South Charleston.