Battle of Summit Point-All that exists at the battle site is a concrete marker. 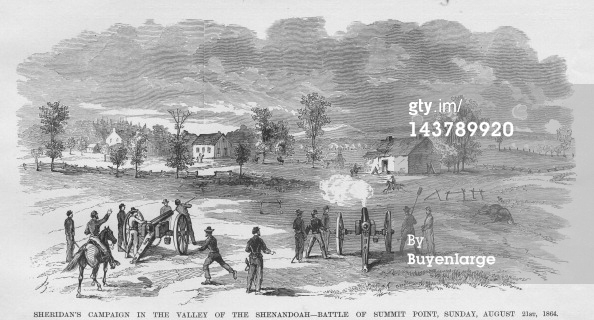 The battle was part of Union Maj. Gen. Philip Sheridan's Shenandoah Valley Campaign, which took place between August and December 1864. While Sheridan concentrated his army near Charles Town, Confederate Lt. Gen. Jubal A. Early and Maj. Gen. Richard H. Anderson attacked the Union forces with converging columnns on August 21. Anderson struck north against the Union cavalry at Summit Point. The Union forces fought effective delaying actions, withdrawing to near Halltown on the following day. The battle resulted in approximately 1,000 casualties.
During the battle of Cameron’s Depot, Aug. 21, 1864, Confederate General Jubal A. Early placed his cannon near the house and formed his battle lines north and south of this point.
The original brick house was built on land owned by Lawrence Augustine Washington, the son of Samuel Washington, George’s brother. The present mansion-house, in an excellent state of preservation, was built about 1825.
Completing his missions of neutralizing Early and suppressing the Valley's military-related economy, Sheridan returned to assist Grant during the Siege of Petersburg. Most of the men of Early's corps rejoined Lee at Petersburg in December, while Early remained to command a skeleton force. His final action was defeat at the Battle of Waynesboro on March 2, 1865, after which Lee removed him from his command because the Confederate government and people had lost confidence in him.
Summit Point is an unincorporated community in Jefferson County, West Virginia. It lies along the Baltimore and Ohio Railroad at the intersection of West Virginia Secondary Route 1 and Summit Point Pike