Overview Within 800 miles of the Arctic Circle, lies the U.S. military’s northernmost base. With a port only accessible for three months out of the year due to severe weather, Thule Air Base operates as an early warning system for Intercontinental Ballistic Missiles, and surveillance operations. Temperatures are known to drop to -60 F ,so keeping those brave troops stationed there warm is crucial. Something else unique about this Base, all utilities are above ground. All water and sewer lines run above ground and are triple heat taped and insulated for easier access if something did happen to go wrong. 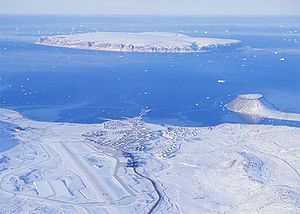 In 1940, a Danish ambassador made an agreement with US forces to defend the Danish colonies on Greenland from the German invasion. An agreement was made with the Danish government that the US was allowed to occupy this land for as long as there was a threat to North America. In 1951, a treaty was passed stating that a Danish flag, and an American flag be flown side by side.

Originally established as a Strategic Air Command installation, Thule would periodically serve as a dispersal base for B-36 Peacemaker and B-47 Stratojet aircraft during the 1950s, as well as providing an ideal site to test the operability and maintainability of these weapon systems in extreme cold weather. In 1957, construction began on 4 Nike Missile sites around the base. These sites as well as their radio transmissions were operational by the end of 1958.

In 1982, Thule became an United States Air Force Space Command base. The 12th Space Warning Squadron, is a ballistic missile early warning site designed to become aware of any missile in which the U.S. is the target or in danger. Approximately 600 personnel serve at Thule.