The Tilton Island Park Bridge of Tilton, New Hampshire represents one of the few remaining cast-iron bridges left in usable condition in the present day. Constructed by Albert D. Briggs in 1881 to a patent filed by Lucius E. Truesdell in 1858, the Tilton Island Park Bridge acts as an example of a unique chapter of the history of bridge-building and civil engineering in which designers were making the transition from wood bridges to iron bridges.

The Tilton Island Park Bridge by B. Clouette in August of 1977 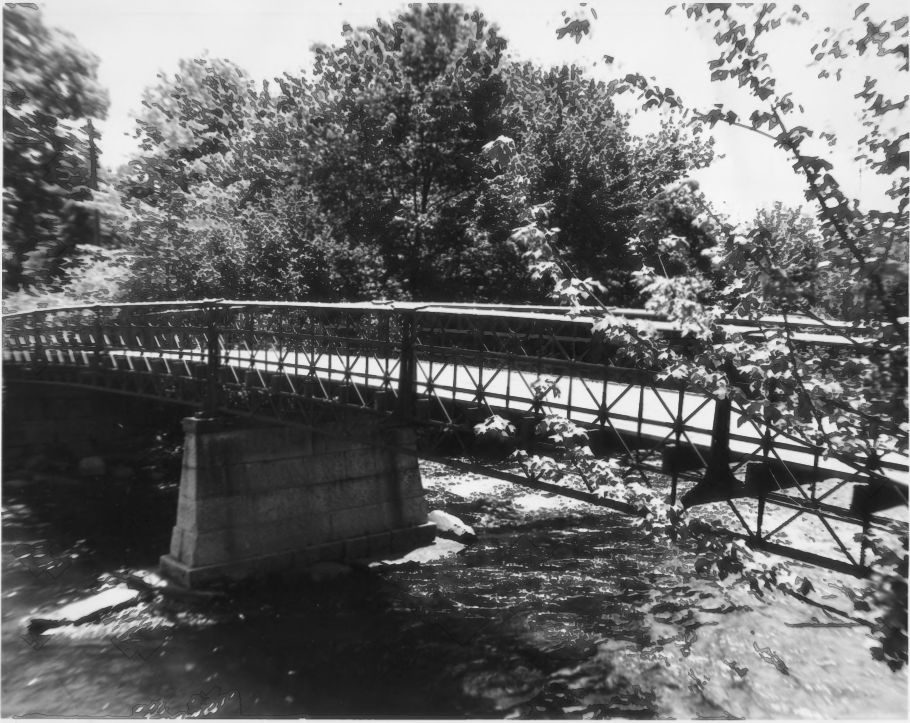 The Tilton Island Park Bridge is particularly unique among the other few remaining cast iron bridges in that it was already out of date at the time of its construction.  Cast iron truss bridges became popular during the 1850s as designers were moving away from wooden bridge designs in hopes of creating stronger and longer-lasting bridges.  Interestingly, the patent for the truss used in the Tilton Bridge is very similar to a design that had originally been intended for use with wooden bridges.

At the time of the Tilton Bridge’s construction, engineering was still a very small field, and few bridge builders were particularly educated on the science behind new designs.  As a result, many new patents were filed for designs that claimed they could improve the strength and longevity of bridges that were scientifically dubious.  The Truesdell cast-iron truss design was, in-and-of-itself not particularly influential.  However, the Truesdell truss is a fantastic example of the eccentric designs that rose during the time of transition between the era of wooden bridges and the era of wrought-iron and steel bridges that would follow.

By the time the Tilton Island Park Bridge was constructed, most other new bridges being constructed were wrought-iron or steel.  It was built by Albert D. Briggs out of Springfield, Massachusetts, who had utilized the Truesdell cast-iron truss in multiple other small bridges he had built throughout the New England region.

The bridge was donated to the city by prominent merchant Charles E. Tilton, whose influence on the town of Tilton is visible even in the name of the town.  Charles E. Tilton was a Tilton native whose successful business ventures in the Pacific Northwest led him to be one of the richest men to ever live in Tilton.  Much of the public services and structures in Tilton and the surrounding villages owe their foundation to Charles Tilton and his grandfather, Nathaniel, who was just as, if not more, influential to the thriving of Tilton.  When Tilton incorporated as an independent town, the citizens voted to name the town in honor of Nathaniel and Charles Tilton.

The bridge is still in use and publicly accessible today, residing within the Tilton Island Park.

Known originally as Bridge Village, this community was incorporated in 1869 and named in honor of Nathaniel Tilton, an early land owner who established an iron foundry and many of the early businesses in the area. This tour includes the home of poets, the mansion of Charles Tilton, the downtown historic district, and Tilton Island Park Bridge.