In 1922, one of the most significant robberies in American history took place six days before Christmas at the Denver Mint. Today, the Denver Mint offers up to a 45-minute tour that includes the history of the robbery.

Newspaper headlines told the story of the robbery and shootout 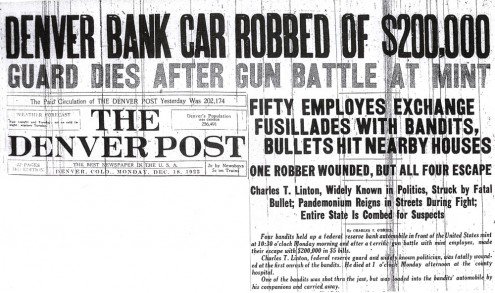 Newspaper report of the robbery in 1922. 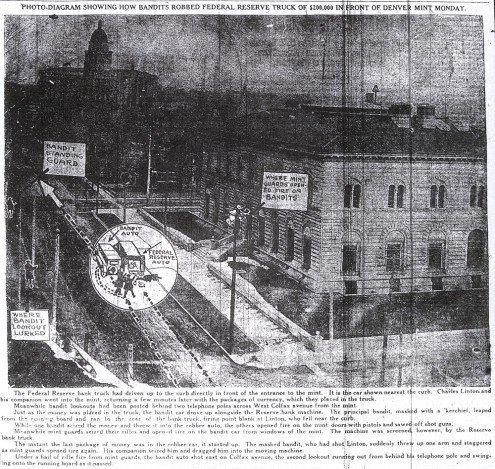 Drawing of one of the men who robbed the US Mint. 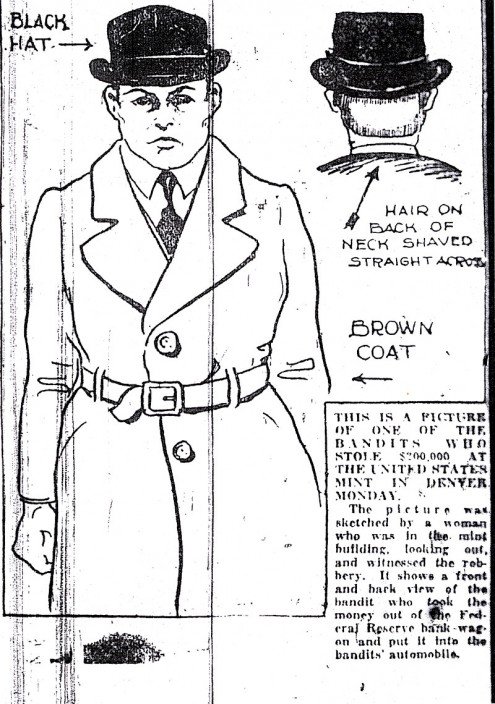 The US Mint building and how it looks now. 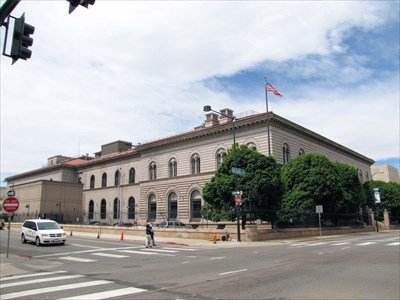 On a cold afternoon on December 18, 1922, four men pulled up to the United States Mint in a Black Buick at a moment they timed to coincide with the transfer of $200,000 in $5 bills. Harvey Bailey and two other men jumped out of the Buick, rushed to the back of the Federal Reserve's truck, and shot guard Charles Linton. To this day, Linton is the only Federal Reserve guard who has lost his life in the line of duty.

While this was happening, another robber smashed open the truck's window and his partner began taking as much money as he could while the others fired at guards who were attempting to exit the building to stop the robbers. Meanwhile, workers in the mint grabbed rifles and started firing out the windows at the robbers. This gun battle only lasted ninety seconds when the getaway driver drove up onto the sidewalk and took out a fire hydrant to add to the confusion and mayhem. The robbers quickly took off in their getaway Buick along with the stolen $200,000.

A witness said the driver in the Buick took them east on Colfax and many witnesses to the crime came forward to help investigators create and circulate descriptions and drawings of the thieves. In January 1923, investigators had their first big break. An old and abandoned garage on Gilpin Street in Denver was found to contain the getaway car and a body. The police photos of the deceased man, but they were only able to form a positive identification of the man by using fingerprints. The investigators discovered it was the body of Nicholas Trainor, who had been injured during the escape.

The authorities were never able to capture any of the other robbers, who were finally identified twelve years after the robbery took place. Captain James Clark was the Denver police who discovered the men that were involved in the crime. Clark stated that there were three men and two women involved. All of the gang had died violently by that time, except for two who had already served time in prison for other crimes they committed. The identification of these two men led to the recovery of $80,000 in Minnesota.