The Kindler home was the residence of Paul Kindler, a German immigrant who arrived in Fresno in 1907. He had previously lived in Toledo, Ohio, where he worked for the Speasler Construction Company. Kindler built the home himself in 1928. It is listed on the National Register of Historic Places. 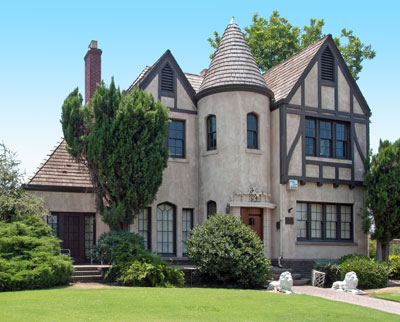 Paul Kindler, an immigrant from Germany, arrived in Fresno in 1907, a time of remarkable growth for the city. Before coming to Fresno, he had lived and worked in Toledo, where he worked for one of the city’s leading construction companies and learned the trade. His arrival in Fresno came at a fortuitous time; the city was growing rapidly and Kindler soon became one of the city’s leading masons.

Kindler built a number of the city’s most historic buildings, including the Bank of Italy building, the Hotel Californian, and the Pantages Theater. He often worked with architect Richard Felchlin, who designed many of the buildings that Kindler built. Felchlin also designed the Kindler home.

Kindler was known for his brick and terra cotta work, and several of his buildings remain among the most historic and visually striking in the city. The Kindler home is listed on the National Register of Historic Places.