A simple bronze plaque on a concrete base directs visitors to a site that was allegedly the headquarters of notorious bandit Joaquin Murieta. For years Murieta and his band terrorized local miners and their camps, although it’s difficult to separate fact from fiction where Murieta is concerned. The plaque states that Murieta’s death occurred at the site on July 25, 1853.

Close-up of the historic marker 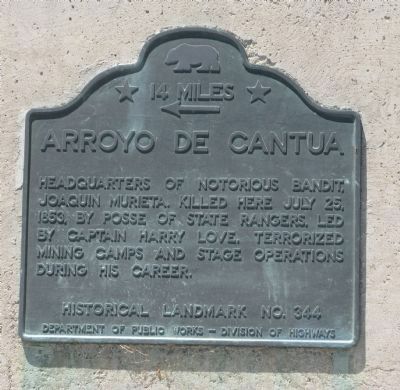 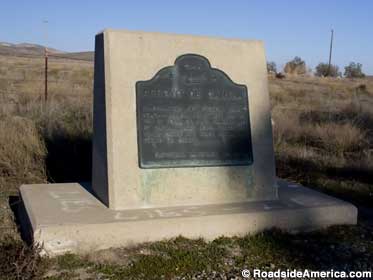 Joaquin Murieta inspired many tales, both during his life and after his death. Some people believe that Murieta was the inspiration for the fictional character Zorro. Depending on the source, Murieta was portrayed as both a violent outlaw and a Mexican patriot. He was often referred to as the “Mexican Robin Hood.” Dime novels were written about Murieta, which both perpetuated his notoriety and blurred the lines between verifiable fact and novelistic embellishment.

Some accounts claim that Murieta was the victim, that before he became a criminal, he had been beaten, his wife raped, and his brother lynched by white racists. Other accounts portray Murieta solely as an outlaw, so feared that area miners would not sleep without a pistol within easy reach.

Harry Love, who led the California Rangers, was charged with capturing the notorious Murieta. The Rangers apparently found the Murieta gang in their stronghold, the Arroya de Cantua, a warren of caves and rocks near Coalinga. Several members of Murieta’s gang were killed in the ensuing attack, but the man Rangers believed to be Murieta attempted to escape. He was shot in the back and if the stories surrounding his death were true, his head was severed, placed in a jar of alcohol, and eventually displayed throughout California.

As with any good outlaw, however, tales that Murieta survived the attack began to circulate immediately. Some claimed that the outlaw was not killed and in fact lived for another twenty-five years back in Mexico. The preserved head was apparently lost in the San Francisco earthquake, so the truth of Joaquin Murieta may never be known.