This most of the port and railway history of Cedar Key is. I'm going into depth of how the Seminole wars affected how they lived back then and also how the main source of getting from towns in Florida. The railway system and how, who, and what it was constructed by. A brief over view of what was going on in Florida at this place in time. 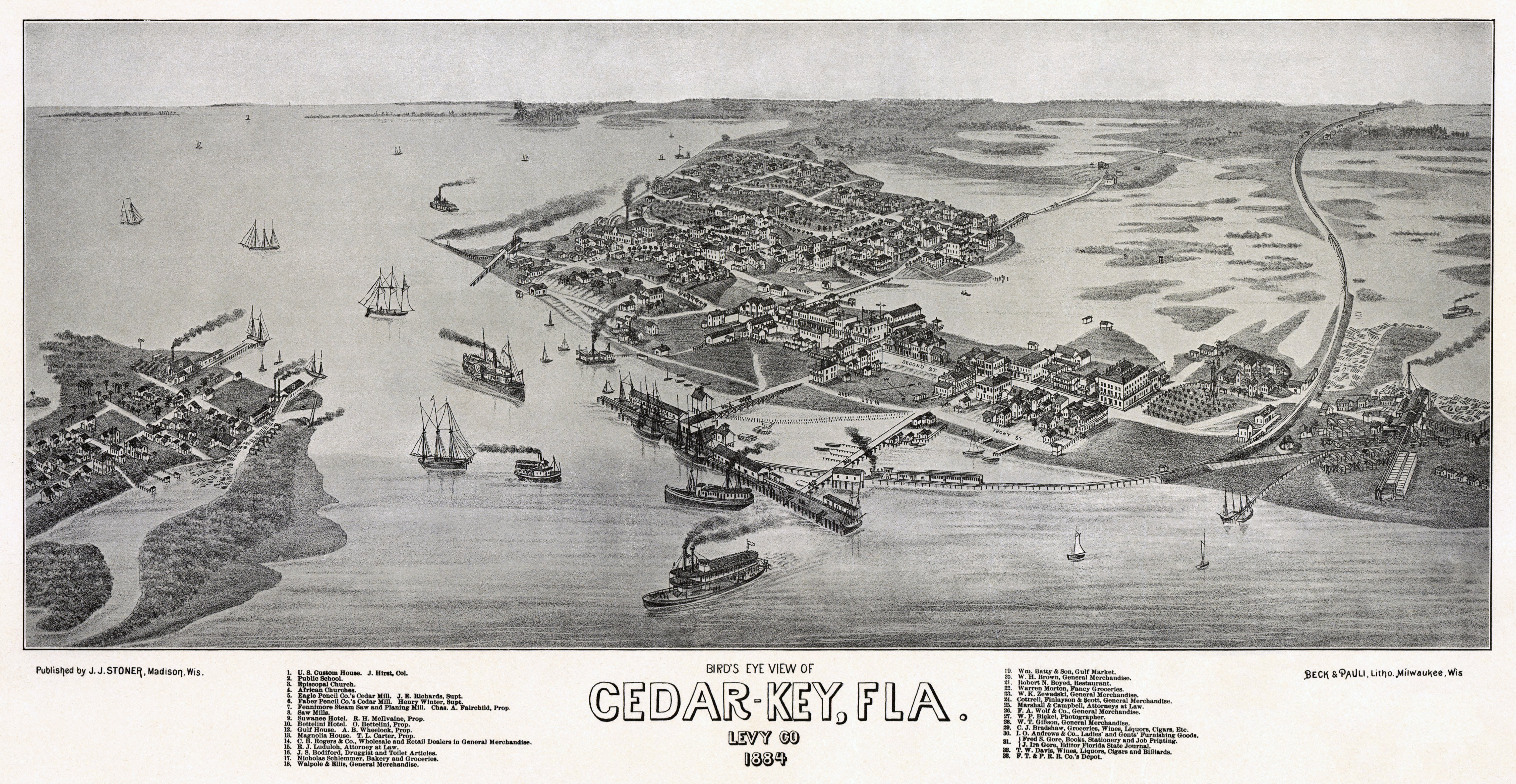 The location I chose for this this research paper was Cedar Key, which is on the west coast of Florida( 61 miles WSW of Payne's Prairie). Cedar Key has a uniqueness unlike it's counter part, Islands in south Florida, Key West. It resembles "old Florida", in the sense that it has you feeling like you were back in the Seminole Indian Wars, fighting for your land; or you're David L. Yulee constructing the very first railroad connecting east west Florida or you were the first to set foot on land of the adventures back in the early 1500s, but anyways you get the picture. The terrain is of heavy bush, thick forests' and palm trees everywhere; if you were to go south along the shoreline for 134 miles, you would eventually come into clearwater. You would also be engulfed in water because most of the west coast of Florida is under water or similar to marsh lands. It's very plush and fertile; It has land thats good for hunting and fishing off a pier or just wading in the water waiting for a fish to bite your line. It was better living from the land with their being an abundance of trees so you could build bigger houses on the land that later became so scarce. The main road in and out of Cedar Key is State Road 24; it runs from Waldo (outside of Gainesville) straight into Cedar Key. The big pool of water that Cedar Key resides on is the Gulf of Mexico, which makes Cedar Key a tourist destination; because of its fishing and boat getaway. Actually, Cedar Key is one of an array of Islands. So Island hopping is a thing, if you have a boat or a canoe. Cedar Key Island's about 4 nautical miles in the Gulf of Mexico.

Cedar Key is one of the oldest cities on the Gulf of Mexico, rich in history.
there are numerous historical facts about Cedar Key but I'm going to introduce you to one that's unfamiliar to the facts that you might have heard about Cedar Key. David L. Yulee who supervised the construction of the first rail-road systems (he went on to establish 2 to 3 more)(Clarke, Robert L.). David L. Yulee was a Florida State Senator, who acted first when the idea was presented to him. He constructed the Fernando/ Cedar Key cross Florida rail-road in 1855. The rail-road opened in 1862, stretching 156 miles from Fernando Beach (which is just north of Jacksonville) to Cedar Key (which is on the west coast of Florida). Cedar Key was also one of the first coast towns to fall victim to the federal forces of the U.S. Army. During this time period, they were trying to push out all the Seminole Indians that were still here; sending them to Oklahoma because they had a huge reservation out there. President Andrew Jackson passed the Indian Removal act (1830), which constitutes in the removal of all Indians and Native Americans. They were heavily sought after by settlers and the U.S.Army to the point of rape, murder, and burning during the Seminole Wars. Cedar Key was also fertile ground for richly grown southern red cedar trees, which provided a strong pencil industry. Cedar Key, at one time, was one of the leading manufacturers of pencils in the country. This pencil industry took place right after the Civil War, but it soon faced the harsh reality of running out of goods to produce. In August of 1896, there was category 3 hurricane, which had 27 foot swells. It totally decimated Cedar Key, which was one mile west from where it is today(Krogman, Wilton M.).

Overall, Cedar Key is most known for its fishing spots, and its food rather than its entertainment attractions. Boating and canoeing are other ways this Island is well represented. If "old Florida" is what you like, I would recommend Cedar Key for your next vacation.